Non-Sport Update's Card Talk
Show us your.....sheets!
This topic can be found at:
http://nonsportupdate.infopop.cc/eve/forums/a/tpc/f/954605353/m/9597039376
John Tirohn
Show us your.....sheets!
Has anyone seen uncut sheets of Topps Dino Attacks? There was some talk a while back about a huge find.
chesspieceface
More from Simpsons Downunder, made by Tempo of Australia in 1996.

This an uncut sheet of the two "polycard" (basically flexible plastic) insert sets that were in the series, The 4 card Springfield's Finest set and the 7 card Seven Duffs set (die-cut and shaped like bottles in their final form).There are four sets of each on this sheet:

Tempo did direct sell a limited edition of 50 the uncut sheets of the normal paper cards, but this polycard sheet wasn't offered the same way. (I got it about 5 year ago from a former Simpsons super collector who was paring down his stash). T

There is also, curiously, a single "Rugrats" chase set found on this sheet. While Tempo, during its brief life, did issue a "Rugrats" set, those polycards on this sheet didn't seem to be a part of it. The presence of these cards may be why these sheets weren't sold directly, especially if Nickelodeon had something to do with them not making it into the regular "Rugrats" set.

STCardGeek
The uncut sheet that started it all

SkyBox offered dealers an uncut sheet of the gold cards in the Phase I card set. I wanted one, but how to get one. Oh, I KNOW! Become a dealer

SkyBox, created a small hobby dealer account, where you could order small numbers, like as low as 6 boxes as a dealer. So, I applied for a business certification through my town, applied at SkyBox and was accepted. I immediately asked for and received a sheet and from there, a madness was born. I now order around 40 cases of product instead of a measly 6 boxes.
Funny thing is, I don't collect uncut sheets..unless they differ somehow.

chesspieceface
From tiny acorns, mighty oaks do grow.
Good stuff, thanks for sharing!

chesspieceface
Anybody got any more uncut sheets these last 4+ years? Show 'em!

Also, I see I need to update my pics since I don't use photobucket anymore.
Will do so soon(ish) and I'll add a few more sheets I've picked up over the last few years.

bealay
I've been after that MM2008A sheet for some time (in post 1 of this thread), so glad to finally see pictures to know it exists!
If it's okay I'd like to share them on the MMC (Marvel Masterpieces Collectors) group I run on Facebook please?

chesspieceface
Sure, be my guest!

Here's an unusual pair of Marvel Press Posters from 1992 or 1993 that together reprinted the full 1992 Skybox Marvel Universe Series III card set. 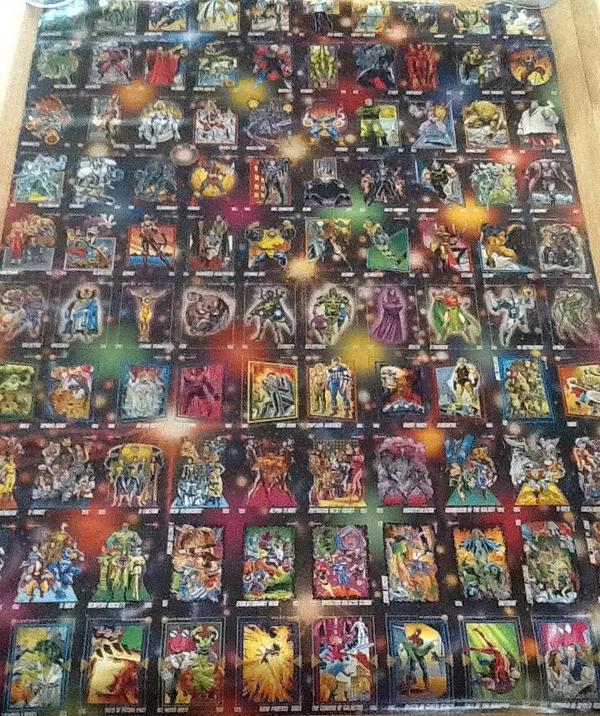 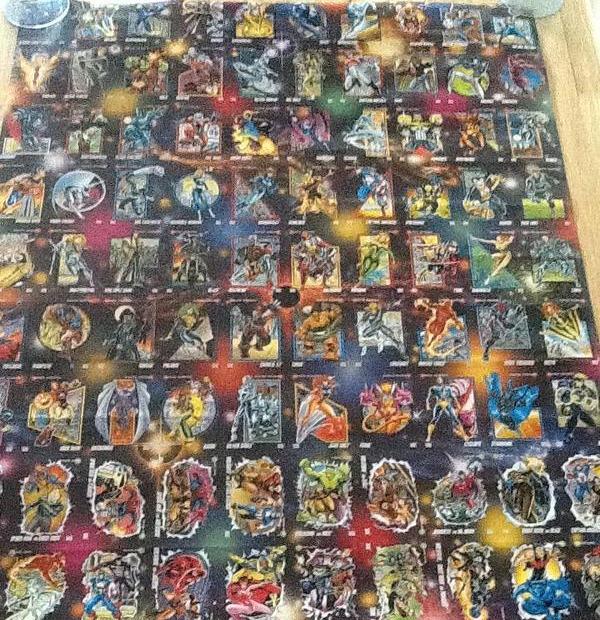 Posters from this series which ran from about 1984 to around 1996 and included about 400 different usually focused on one or two characters or a team. Images originally created for Marvel trading cards appearing on these posters were few and far between but another one featured the Hildebrandt Brothers 9 card chase set from Fleer Ultra X-Men 1993 as a single image.This message has been edited. Last edited by: chesspieceface,

catskilleagle
I think it was the spring of 2006 that I was working in Florida in a friend's shop, also taking care of his dog while he was on vacation. I'd been there about a week and was looking for a different place to get lunch. I had heard about Beef O' Brady's on TV. I stopped there for a hamburger and on my way out there was a stack of 4-card sheets on a table and I picked one up. You never know when you're going to find a card. This one is 5 x 7 1/2 inches.

I went back there a few days later to see if they had more cards or maybe a different one. They didn't. 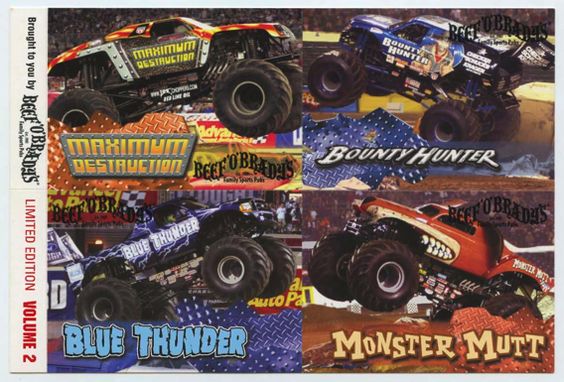 catskilleagle
That Ultraman hologram sheet is cool. I was trying to buy one of those a couple of years ago. First of all, it's an oddball piece because the individual cards were available in Japan as some kind of candy insert in 1999 (I think). I don't see a lot of singles come up these days (cool enough that way). Occasionally, you see a 4-card panel or an 8-card version and I hate to think that someone cut down the full 16-card sheet, though I should temper that with the fact that I've never seen a bigger sheet. Who knows, the 16-card sheet might be half of a full 32-card sheet.

Anyway, I saw one had been up for auction and no one bid on it and contacted the seller. It was only $25-30 plus shipping as I recall. He said he would sell and then I never heard from him again.

[QUOTE]Originally posted by juke:
I'm not into sheets, but I love holograms, so these are my only uncut sheets.

catskilleagle
Here's a straight-on view of the 16-card sheet that I copied a couple of years ago when I finally realized I should copy images of oddball stuff when I can't get the actual card. It's a cropped version of one you can find online but this is higher in resolution. 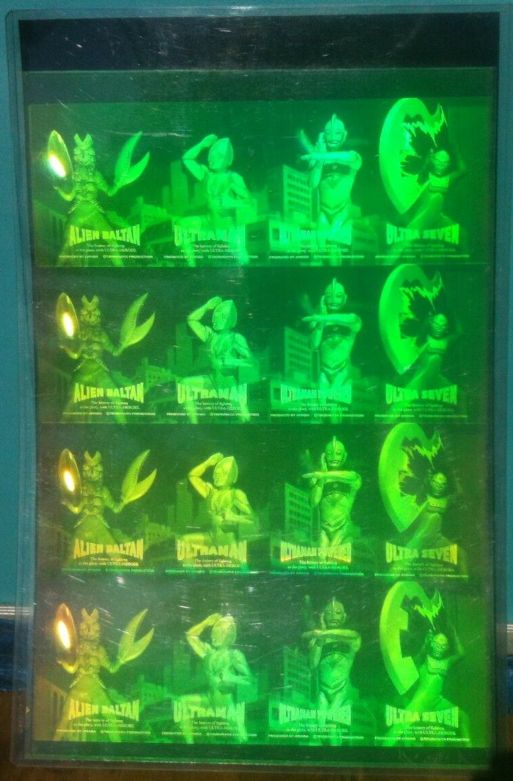