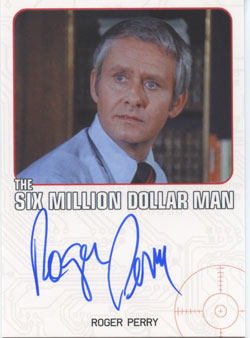 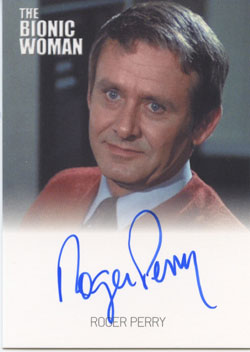 He also had a number of Star Trek cards from his role in the TOS 1st season episode "Tommorow is Yesterday," as Cpt. John Christopher. He was married at one time to Laugh-In actress Joanne Worley.
Bill Mullins
Senator and presidential candidate John McCain has died. Bill Mullins
As noted elsewhere, Jacqueline Pearce has passed away. Tommy C
Burt Reynolds has died. He was on many cards.
See below.

quote:
Originally posted by Tommy C:
Burt Reynolds has died. He was on many cards.
See below.

So include an image of one. A great actor (see, for example, his work in Boogie Nights) and a great STAR.

In 1975, my Sunday School class spent a Sunday morning staring out the window as he filmed a scene from W.W. and the Dixie Dance Kings down the street from the church I grew up going to.

When he was good (Smokey and the Bandit) he was exactly what made movies fun to go to. RIP
JOHN LEVITT
Liz Frazer has also just died.

JOHN LEVITT
As mentioned in another thread by Kevin F Fenella Fielding has died aged 90. When Unstoppable released their 2018 Year set I was lucky enough to have a box of the Women of the Avengers and inside was a Fenella Fielding Autograph as below. I have also included the card from the base set the image came from.

JohnThis message has been edited. Last edited by: JOHN LEVITT,

Bill Mullins
Peter Donat, known for playing Mulder's father on X-files (among other things) has passed on, age 90. Bill Mullins
Zienia Merton, who had cards as Sandra Benes in Space 1999 and as Ping-Cho in Dr. Who, has died. Bill Mullins
Star Wars producer Gary Kurtz is no longer among the living.

And Al Matthews, who played Sgt. Apone in Aliens, is dead. This message has been edited. Last edited by: Bill Mullins,
Bill Mullins
Comic book artist Norm Breyfogle, known for his work on Batman, has died. Reports don't give a cause of death, but he had a stroke a few years ago and has had problems since. Here he is on a 1960 trading card which sold

https://www.ebay.com/itm/CHARL...4:g:cWcAAOSwyQNZ4RJr
Bill Mullins
As posted in another thread, Scott Wilson, who played Hershel Greene on The Walking Dead, is himself now dead. RevJay
Stan Lee passed away today. He was 95. And another legend is gone.
cardaddict
Now that is sad news.