http://www.msn.com/en-us/tv/ne...-AA9WpbV?ocid=HPCDHP
Raven
This is being billed as a 6 episode continuation, which I guess means that it is designed as one story playing out in the limited series format that you get with so many the cable shows. Think True Detective, which was truly impressive for it's first short season.

What I enjoyed about the X-Files was the weird stories in between all the Alien invasion and government conspiracy plots. When that started taking over I stopped watching most episodes. At this point even more TV shows have been introduced with alien invasions, alternate dimensions, secret government societies, etc.

So if the new episodes are just going to cover the same topic that has been run into the ground by the X-Files and everyone else, I'm not interested in seeing it again. If they come up with a new storyline and go back to something that at least seems fresh, that would be worth trying.

One thing is for sure, just saying it's the X-Files with these same two characters may attract the small diehard fan base, but that wasn't enough for the last movie and it won't be enough to support a return. They have to have a new idea and a good script.
X
Thing is Raven, I Want to Believe was a 'monster of the week' style story and unfortunately it tanked even though it was a decent enough film. The creative team wanted to move away from the myth-arc/conspiracy storylines and the public didn't warm to it so I doubt that is the same route they will take. Still, the die-hard X-Files fans saw it for what all the X-Files adventures were: another installment of Mulder & Scully's story. Those two characters have and always will be enough, and that is the basis for the recommission: Anderson and Duchovny's willingness to do more, and the die-hard love for the franchise after a shaky last season and a lukewarm last film.

So what will be the focus? I would be extremely surprised if the 2012 alien colonisation storyline was not addressed. It has to be, given its importance to the series and the date has passed.
chesspieceface
At some point, they'll have to tell us what the "Truth" is. If they are ever able to deliver on that basic promise the original viewers were implicity made, the show will go down as a classic.
If they can't deliver the goods on that admittedly tall order in the end, it was still a worthy effort thanks to the likeability of the leads and the genius premise (repeatedly copied since) that allows it to play the broad spectrum of fantasy from the harder plausible sci-fi material to urban legends, folktales, monsters of all kinds, to the out fairy tail type stuff, and even black oil, for pete's sake.

Raven
Well this discussion is about a year ahead of itself, but I think you are both right, and therein lies the problem.

I Want to Believe had to be a stand alone story because there was too much of the alien background arc to explain to a larger audience that didn't follow the series religiously. It wasn't an embarrassing movie, but it was not good either. The first half set up was decent, but by the time you got to that old sewing on the head ending it was neither shocking or surprising. As you said X, show fans wanted to return to the arc and movie non-fans needed more than just bringing the characters back. So nobody was happy and it probably did better on DVD because it really belonged on the small screen anyway.

As for your point CPF, it may well be that this extended series will go back to the arc and try to explain the "Truth". If they do it with any kind of sense everyone will have closure. However, if they don't, I don't agree that a worthy effort makes it all OK. In fact to me it would be better to leave it "out there" than come up with some nonsense that ruins everything that came before. Just think Dexter and Lost as perfect examples of writing into a hole that you can't climb out of.

chesspieceface
"Twin Peaks" as well, but they will try in 2016, and as I've opined before with that series, it really was more impressionistic in its intent than the others, meaning the "feeling" the viewer is left after watching is more important than a sense of satisfaction that the narrative has followed a tidy arc with a proper start, middle, and finish. That show is still fairly unusual in that regard and I suspect will remain so in the new edition.

Obi Wan Chrisobi
I'm hoping that the new episodes will deal with the invasion plot that was left hanging with the conclusion of the series since they never got around to making a third film to pay that off. The good thing is that they could sprinkle a couple of stand alone stories into these episodes and maybe use three or four of the episodes to deal with the invasion stuff. I'm interested to see what they come up with.

Sidewinder
Well as a die hard fan who's followed the series for 20 years, I'm very happy to see it come back. I love that David and Gillian, even though they have continued their success with other projects, are excited to come back to these roles. Fox really got lucky with these 2 actors who have continued to be interested in being involved with the series after so many years.

I would like to see them address the mythology, as most fans were looking for that in I Want To Believe.

Would love someone to produce a card set for this return of the show.
Juelle Lou
And it looks like Skinner will be back too!

quote:
Very happy to announce that Walter Skinner will once again be getting all grumpy and ****** with his two wayward kids. Very happy.

David R
I believe they said the release date will be Jan 24, 2016
WOMBLE
Back in action... 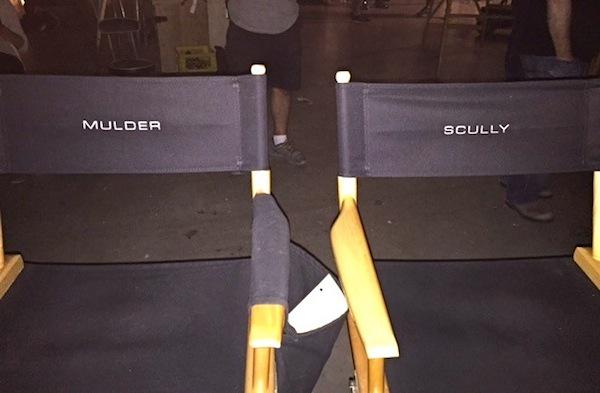 Raven
So the first episode just played here, and remembering the time differences, I won't start talking about it.

I was interested in what true X-Files fans thought about it though. I will say that the 2nd episode plays tomorrow night and I'm on the fence as to whether or not I am going to bother to watch another installment of this particular storyline.
dcole
I watched the original series pretty consistently and am enjoying this new one. To me, the storyline is consistent with classic x-files while the 'conspiracy' angle is current to some of today's 'conspiracy theories'.

Kevin F
Might I suggest someone starts a new thread for this topic with ***Spoilers*** in the heading/subject so that people can discuss the new series content without spoiling it for those who have not seen it yet ?
Raven

quote:
Originally posted by Kevin F:
Might I suggest someone starts a new thread for this topic with ***Spoilers*** in the heading/subject so that people can discuss the new series content without spoiling it for those who have not seen it yet ?

Good idea, why don't you start it? If you can get at least a couple of viewers talking maybe you can have a conversation.

The issue I have with the threads is that there is limited participation, especially afterwards. Whether it's a TV show, or a movie, or a card product, there may be a lot of speculation while it is still in the planning stage, but hardly any comments when it is completed and released.

I find that odd. Why not say if something was as good as you thought it was, or if it was only so-so, or if it was awful and a waste of time and money?

Oh well, most threads seem to die on page 1, so if you get some comments you are lucky.

quote:
Originally posted by Raven:
Good idea, why don't you start it? If you can get at least a couple of viewers talking maybe you can have a conversation.time and money?

quote:
Originally posted by Kevin F:
I have not seen the new series yet and it may be some time before that changes...

The series starts in the UK on the 8th February on Channel 5 at 9:00pm.
chesspieceface
The "no spoilers" threads tend to be for people who marathon shows once the season is over, and don't want any surprises ruined before they can see them all.

This run, though, is only 6 episodes long and will end only 28 days from tonight after having premiered only 8 days ago, so about as brief as a "season" can be short of them releasing all episodes at once ala "Daredevil" and "Arrested Development". That, along with the lengthy wait for new episodes and the accompanying anticipation means most people will be watching these new X-Files as they air. We definitely are...

At the same time, I do see our UK friends will be a few weeks behind us, and some out here will be marathoning even this quick run at the end, so no spoilers from me, in any event.

quote:
Originally posted by Kevin F:
I have not seen the new series yet and it may be some time before that changes...

The series starts in the UK on the 8th February on Channel 5 at 9:00pm.

I've been watching a lot of British TV in the last couple of years and so that's been the opposite for me. Stuff like Broadchurch, White Chapel, Ripper Street and The Fall get here well after they have ended.

I actually don't mind spoilers at all and often actively try to find out the ending before I commit to watching an extended series. I can see where it might take away some of the pleasure for some people, but it also takes away a lot of the pain. I have sat through too many 10 - 12 episode sets that culminated in finals where I just said "what the hell was that". I wasted my time on nonsense. It is very easy to set up a complex and challenging story and it is very hard to give it a satisfying ending that doesn't ruin what came before.

If I know I'm not going to like the ending, I don't need to watch it at all. Just imagine how many people would not have watched Lost if they knew the resolution they were going to be handed.

cardaddict
I missed the first one due to football being on so late, tried to watch the second episode but found it so bad I shut it off halfway through, skipped a couple and tried again, but had to turn it off after ten minutes because I simply could not STAND the commercial breaks (and the idiotic commercials themselves), and the constant **** flowing across the bottom of the screen made me crazy. If the network's goal was to drive me away from their own product they succeeded 100%. Now I remember why I don't watch TV anymore and just rent and buy DVDs. I'll wait for the DVD.
And I LOVED the X-FILES first 9 seasons!!!!