Non-Sport Update's Card Talk
Obituaries
This topic can be found at:
http://nonsportupdate.infopop.cc/eve/forums/a/tpc/f/958604453/m/2837086376
Tommy C
Obituaries
Glenn Frey of The Eagles has died at 67
chesspieceface
From "The One You Love" by Glenn Frey:

"Are you're gonna stay
With the one who loves you?
Or are you goin back
To the one you love?
Someone's gonna cry
When they learn
They've lost you.
Someone's gonna thank
The stars above."

Big, big loss here. All sympathies to his family, friends, and many fans.

Raven
Don Henley is probably the most famous Eagle, but Glen Frey sang many of the lead vocals and wrote or co-wrote many of those classic Eagle songs. Those are the songs of the 70's generation.

Can anyone not pick out Hotel California from the first 5 notes?

I was sad to hear that. I was a little kid when that show was on. To a kid, it was great to see that you could be friends with a bear.

Two years ago, he was on an episode of "American Pickers." He seemed like a nice guy. He arranged for the guys to meet George Barris, the custom car legend who created the Batmobile. Barris just passed away a couple of months ago.

quote:
Originally posted by David R:
Dan Haggerty the star of the 1970s TV show Grizzly Adams, about the guy who lived in the woods, died at 74

catskilleagle
I got in my car to drive home from work and heard the news on a local classic rock-type station. That was tough to hear. I was unlucky to get into the Eagles the year after they flew their separate ways. Henley was very bitter at the time. It was like two brothers no longer talking to each other. It didn't look like the band was ever getting back together. Then, in 1987, I could hear what sounded like the Eagles singing background on Richard Marx' "Don't Mean Nothin.'" It didn't turn out to be Henley nor Frey (it was former Eagles bassists, Randy Meisner and Timothy B. Schmidt) but for some reason I knew that the band would reunite and they did though it wasn't until 1994.

In 2001 a friend gave me a ticket to see the Eagles in concert with him and his wife while I was on business in the Tampa area for a couple of weeks. During the 80's, I didn't think I would ever see them live and they sounded like they just beamed in from 1979. "Hotel California" was awesome and Timothy B. Schmidt was note-perfect with "I Can't Tell You Why." My friends started going to at least one of their concerts on every tour after that.

I remember an episode of "Letterman" during the 80's when Frey was a guest. Frey mentioned that the band had been fighting about stuff in the late 70's and Letterman asked what they were fighting about, "Who drives?" That made Frey laugh. Frey also performed "Desperado" (singing while playing piano) which he co-wrote with Henley. It was unusual for Eagles fans because Henley was lead vocal on that on the original album, and as far as I know, he also always sang it in concert. It was a great version. That memory makes me smile even today.


quote:
Originally posted by Tommy C:
Glenn Frey of The Eagles has died at 67

Will
Watch the "History of the Eagles" documentary, and you may walk away with a different feeling about the various band members. I love the band and its music, but I lost a lot of respect for certain members when the whole debacle with Don Felder played out. This time is covered pretty quickly in the documentary, and it is obvious that not a lot of love was lost between Felder and Frey/Henley. However, having said that, Don Felder posted a very nice and touching tribute to Glenn Frey earlier this week, which I was glad to see.

RIP, Glenn Frey, you were part of the soundtrack of my life.
chesspieceface
That's a great documentary, and yeah, they were a little hard on Felder (Frey in particular), but in the end, it all worked out.
Frey will be missed and all remaining members are rightly revered. Felder laid down the sound of "Hotel California" and that can never be taken away...

archifou
R.I.P. Glenn Frey
Bill Mullins
Abe Vigoda, age 94, just passed away. Jeff Allender's site only shows one card for him, a set called "Hooray for Hollywood".
chesspieceface
"Tom, can you get me out of this...for old time's sake?

(I think Barney, Wojo, and Harris are all that remain of the "Barney Miller" cast. I loved that show.)

lag30240
Chano (Gregory Sierra) is still living.
Raven
For some odd reason Abe Vigoda was rumored to have died several times over the years. It was always false, but I guess this one will stick.

He will live on in Barney Miller reruns, just saw one with him in it the other night. RIP Mr. Vigoda.
MILLHOUSE
Sad news Sir Terry Wogan Has passed Away Today From Cancer. He Will Be Sadly Missed
hammer

quote:
Originally posted by MILLHOUSE:
Sad news Sir Terry Wogan Has passed Away Today From Cancer. He Will Be Sadly Missed

He was the dad of comedian Chris Elliott, and starred with him on that 1990s FOX show, "Get a Life", as his father
Bill Mullins

quote:
Originally posted by David R:
Comedian Bob Elliott, popular in the 1940s and 50s, has died at 92

He was the dad of comedian Chris Elliott, and starred with him on that 1990s FOX show, "Get a Life", as his father

Bob Elliott had a card in the 1953 Bowman "TV and Radio Stars from NBC" set: 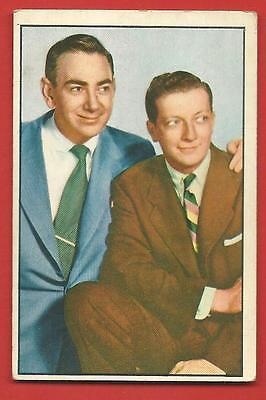 (that particular card is from Keith Olbermann's collection). The only remaining living people I'm aware of from that set are Ronnie Walken, who now goes by the name "Christopher", and Carl Reiner.

Vanity, who was a protege of Prince, just died. I'm not aware of any cards she was on.
David R
Harper Lee, author of To Kill a Mockingbird, has died
BILLZEE

quote:
The only remaining living people I'm aware of from that set are Ronnie Walken, who now goes by the name "Christopher", and Carl Reiner.

Thanks for posting that Bill...

You may be right on the mark that only Reiner & Christopher Walken are still around from that vintage set. Did you research all the child actors featured?

Only discovered that Walken was a child actor recently thru online research. Both survivors have had quite a long run at acting, directing, etc
David R
Singer Sonny James, best known for 1957's # 1 hit "Young Love" has died at 86
BILLZEE
Sonny was #28 in Topps 1957 Hit Stars...
Bet he made a lot of guest appearances on HeeHaw too! LOL