Bill Mullins
Saddened to hear that Norm MacDonald has passed away.
catskilleagle
Oh no, not Norm. That guy was hilarious. One of the last times I saw him was on David Spade's show last year. You should get his book, "Based on a True Story: Not a Memoir" (Random House, 2017). It's so good, I loaned it to a friend and didn't get it back.

Edit: Today, I remembered that I loaned my copy of "The Norm Show" complete series on DVD to another friend a few years ago and I didn't get that back either. Now, it's hard to find.

quote:
Originally posted by Bill Mullins:
Saddened to hear that Norm MacDonald has passed away.

This message has been edited. Last edited by: catskilleagle,
Kevin F
One of the pioneers of home cumputers, at least here in the UK, has passed away. Sir Clive Sinclair inventor of the Sinclair Scientific Calculator (the very first calculator I ever bought), the ZX-81 home computer, Sinclair Spectrum and even the C5 electric vehicle has gone at the age of 81:

Thought maybe there might be a stray card of him but couldn't find anything.
catskilleagle
I'm sorry to hear that. He might be in a group shot for "Swiss Family Robinson" on a card in one of the Disney sets. I don't think there was ever a set for that movie. He was in "Mars Needs Women" and "It's Alive" (1969) so he might be on a card for those somewhere.

Thought maybe there might be a stray card of him but couldn't find anything.

Raven
Of the the three most sadistic children's movies I can think of, Old Yeller tops the list. The other two are Bambi and Dumbo, but as cartoons they are less realistic. Some dope got me to watch all of them as a kid.

Tommy Kirk was a well known child actor and made a few movies when he got into his twenties, but Disney had dropped him by then. He was gay in a time when it ruined careers and he had some hard years afterwards, but he survived outside show business and was inducted as a Disney Legend in 2006. He wasn't bitter about his treatment. RIP Mr. Kirk.
David R
Peter Scolari has died at 66 of cancer.

He was, of course, famous for "Bosom Buddies" with Tom Hanks in the early 1980s. Then he did "Newhart" and in the late 1990s, he did the TV version of "Honey I Shrunk the Kids" for 3 years.
catskilleagle
I just read that Joanna Cameron passed away last week from complications of a stroke at the age of 70. She had retired from acting back in 1980 but she was memorable for her role in "The Secrets of Isis," a Saturday morning show in the 70's. My brothers and I watched that show.

The article noted an appearance in Columbo but I recalled that she was in an episode of the short-lived "Spider-Man" show that also ran during the 70's. Back then, they couldn't do a good web-shooting special effect. They opted for web that looked more like a rope and it looked clunky in action. It's what they had to work with.
Raven
This one is just sad and ironic.

Glen de Vries, a Blue Origin employee who flew with William Shatner on their rocket ride of October 13th, has died less than one month later. He and another man were killed in the plane crash of a private single engine Cesna in a wooded area of NJ yesterday. Details are scarce and the investigation is on-going, but it sounds like he was the pilot.

How strange is that and how many people have to die in private planes before they realize its not a safe, cool hobby.

Another great irony is JFK Jr, perhaps even worse. When Jackie was alive, she refused to let him fly a plane. Maybe because her step-son had died in his own plane. So JFK Jr. waited until after she passed away and then he did what he always wanted to do. You know the rest . . . life is strange. RIP.
Tommy C
Eddie Mekka of "Laverne & Shirley" fame has died at 69. I don't think he was on any cards.
catskilleagle
Legendary NFL coach and broadcaster, John Madden, died yesterday at the age of 85. He was a fan favorite as the Oakland Raiders head coach in the 70's because he was so expressive, yelling with arms flying around all over the place, and he never had a losing season in ten years with a Super Bowl win at the end of the 1976 season. He moved to the broadcast booth after he retired and had the same style. He was still excited about football so being a "color commentator" allowed him to have a foot in the game without the stress.

He also inspired and advised on the "Madden NFL" video game in the 80's - still a hugely-popular game. He refused to have his name put on the game when the initial idea was to have it play with less than the NFL's 11 players on offense and defense. It took a couple of extra years of development for the game developers to create that but it added authenticity, Madden's stamp, rather than the rubber stamp of someone just collecting a check.

I remember him accusing Miami Dolphins' head coach Don Shula of having the Orange Bowl ground crew overwater the field so it would slow down the Raiders' receivers for the weekend's game. I remember how he liked to talk to people across America as he traveled to games by bus, his personal "Madden Cruiser" during his commentator years (retired from that in 2009). He was a huge success at what he put his mind to but he always came across as a regular guy because he was regular guy at heart and everybody could see it.

The Fox network ran a tribute special on him on Christmas. It has been said that Coach Madden died unexpectedly but I wonder if his health was actually in decline.

It's been said he still watched games dissecting them among friends at home after he retired. 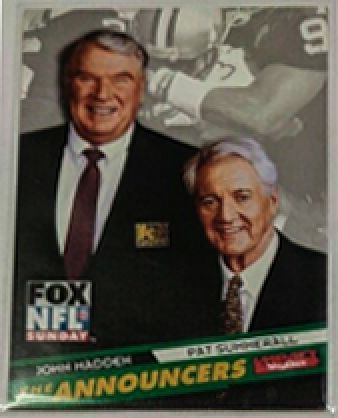 This message has been edited. Last edited by: catskilleagle,
Tommy C
I didn't realize until this week that Sean Connery's lookalike younger brother Neil died in May, at age 83. He only did two movies in the late 1960s, one a James Bond parody, and a few minor British TV appearances in the 70s and early 80s, and then became a plasterer.This message has been edited. Last edited by: Tommy C,
Raven
Awful news to end an awful year. Just heard Betty White has passed away shortly before her 100th birthday next month. I feel really bummed about this one. I think we all felt we knew her a little from decades of TV shows and game shows. RIP Golden Girl and Password Champ.
catskilleagle
Yes. She was a celebrity from the early days of television - maybe the last one left from there and then. My earliest memories of her were from "The Mary Tyler Moore Show," "Password" and "Match Game." She appeared in an episode of "The Odd Couple" (early 70's) in which Felix and Oscar play on "Password".

In today's online reports, I see mentions of her 2010 appearance on "Saturday Night Live." What I remember of that show was that it was the best one of the season - maybe the funniest one of a few seasons around that time. Smart and naturally funny, she must've really inspired the writers that week.

She was for animal rights before it was hip too.This message has been edited. Last edited by: catskilleagle,
Tommy C
Director Peter Bogdanovich has died at 82.

His successes slowed down in the late 1970s, but in 1985 he did "Mask" with Cher and Eric Stoltz
Tommy C
Here is Sheila James, mourning the loss of her "Dobie Gillis" co-star, Dwayne Hickman, who died at age 87.

https://twitter.com/SheilaKueh...Eserp%7Ctwgr%5Etweet
Tommy C
Ronnie Spector of the early 1960s group "The Ronettes" has passed at 78.

Best known for "Be My Baby", "Baby, I Love You", etc.
Tommy C
Fred Parris, the lead singer of the doo wop group The Five Satins, which had the 1956 hit "In the Still of the Night" has died at 85.This message has been edited. Last edited by: Tommy C,