That really helped reinforce rarity, even with the lesser signers.

quote:
Originally posted by Scifi Cards:
I'm disappointed that the autos don't seem to be numbered like the Outlander set was.

That really helped reinforce rarity, even with the lesser signers.

They probably will be. Likely Crypto stamp the numbers on after they get the cards back? Just in case they don't get them all back, or some are damaged and can't be used. Or something silly like to make sure the signer doesn't sign over the numbers.

The posted images of the Outlander ones didn't have the numbers on either.
ravenheart

quote:
Originally posted by barobehere:
Momoa (signed for GoT)

Also signed for Conan The Barbarian, Leaf Pop Century, and Stargate: Atlantis.This message has been edited. Last edited by: ravenheart,
Scifi Cards
Dustin confirmed that all the autos will be numbered.

Still expensive, but I honestly believe adding accountability to autograph numbers reinforces values across the board.

It also eliminates some speculation early on, like exactly how many Gal Gadot signed. At least purchases will be made with all the info, not some inflated story on eBay.

Raven
So does anyone know when this is supposed to come out? The only thing I see is 4th quarter 2019.

It is great that the autos are numbered, but since they are, why not just put out the numbers now and people can decide if they want to risk a buy in?

Like I said, rarity cuts both ways. A rare autograph card will earn a higher price for the card, but it will also deter collectors from buying blind because the chances of pulling it, or any other in the same class, are that much slimmer. It's OK to play these games of 1/5 or 1/10 or 1/20 when you have an affordable product. Not so with these ultra products, because you are starting off paying the price of a great hit when no such thing is promised or even likely.

If the production numbers of the main cast signatures are good, Crypto should just come right out with them and people can plan better. Why keep a good secret?
ravenheart

quote:
Originally posted by Raven:
It is great that the autos are numbered, but since they are, why not just put out the numbers now and people can decide if they want to risk a buy in?

Maybe they don't know yet? They might not have gone through all the returned cards to check for damage etc. Ultimately, I imagine that's what determines the final numbers.
Raven

quote:
Originally posted by Raven:
It is great that the autos are numbered, but since they are, why not just put out the numbers now and people can decide if they want to risk a buy in?

Maybe they don't know yet? They might not have gone through all the returned cards to check for damage etc. Ultimately, I imagine that's what determines the final numbers.

Possibly, I don't know if it even has a definite release date. I was merely thinking in terms of the contracted numbers for the main cast, the big ones that will drive the demand, and what is already in hand. CZE may not know yet, but if there is a decent shot of pulling signatures from Gadot and the others, it will boost the box sales.

It's unfortunate, but when card makers want to price product this high, it's living and dying on the big hits. There are also sketches here, that may be quite outstanding, but a sketch product gets highly subjective. It's much easier to set a market value on an autograph card.
Scifi Cards
Product is supposed to release in November.

I'm guessing it will be on target like Outlander was because they wouldn't announce the signers prior to having them in hand and the sketches have been in the works for ages.

As for the numbers... They did release Outlander numbers several weeks prior to release. Not time enough to help dealer orders, but plenty of time to help consumers. I imagine they are probably processing the numbers now, if they were already numbered the pics would have been with serial numbers to begin with.

ravenheart
Looks like at least one of the top names will have more than one card... 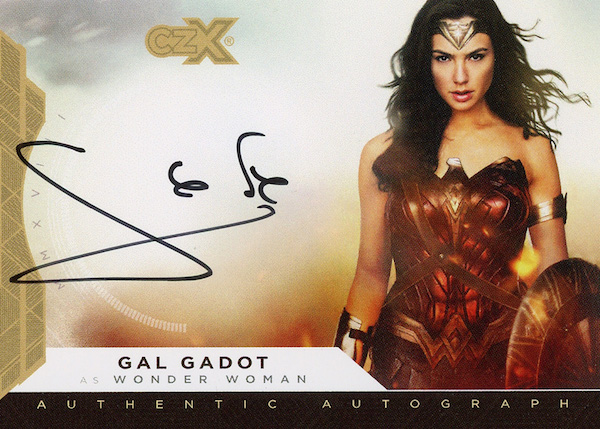 This message has been edited. Last edited by: ravenheart,
Raven
I find it interesting that Gadot generally signs her name in Hebrew, as above. When she does write autographs in English, which seems rare, she prints the letters so it's a signature without being a signature. Although not being able to read Hebrew, I can't really tell if those might not be printed letters too.

I know of at least one other actress who has done this on her autograph cards. Alona Tal signed her Inkworks Supernatural A-12 twice over, once in Hebrew and then once in English, which is also printed letters. So I guess that's how it's done.

With so much room on that card it would have been terrific if Gadot had done both too, but I rather like this as a more recognizable personal autograph, if there could be only one.
ravenheart
Oh is that what that is. I thought it was just a lousy signature

Interesting on the Alona Tal ones though. I've got three of her autographs, and always just thought that was a little pattern she liked to illustrate her cards with, along with the heart she always draws. She did it on stickers used for the Connections set as well, but not on the Cryptozoic set.

I would imagine Rila Fukushima, who signed her Arrow season 4 autographs in Japanese, probably has an English version too... Unless of course it's not Japanese, and is just "Rila" written in a way that it looks Japanese to idiot Westerners like us...

Raven
I also have a Veronica Mars auto from Tal signed with her two signatures. Both Tal and Gadot are Israeli born, so it's possible that neither learned a cursive signature using the English alphabet. Just guessing, but Gadot does have a few signed photos shown in internet searches where her name is printed, but they seem to either pre-date Wonder Woman or be early afterwards. Otherwise this appears to be her consistent signature right now.
wolfie
Mia Hama signed her james bond autograph in japanese. 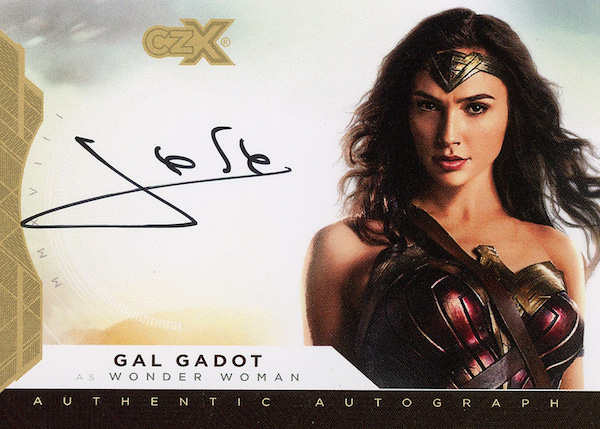 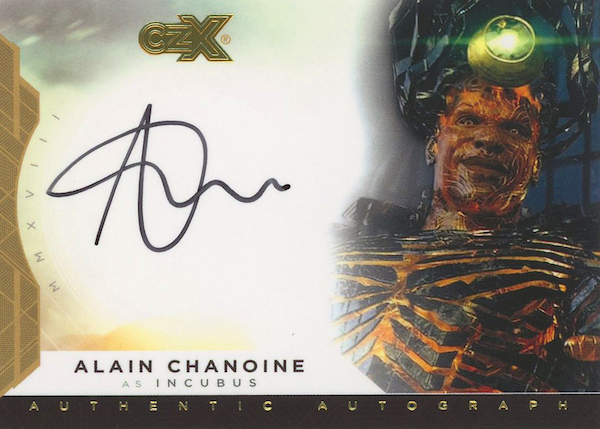 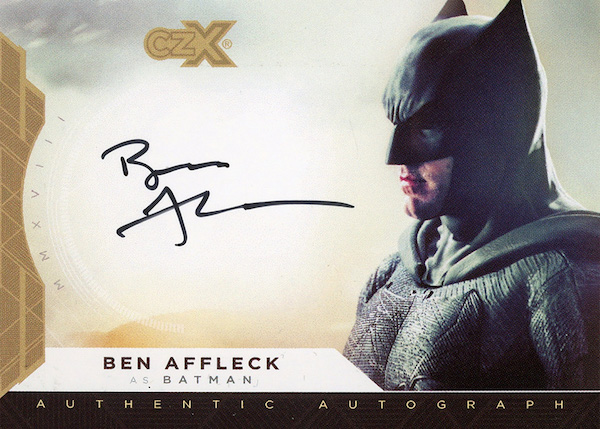 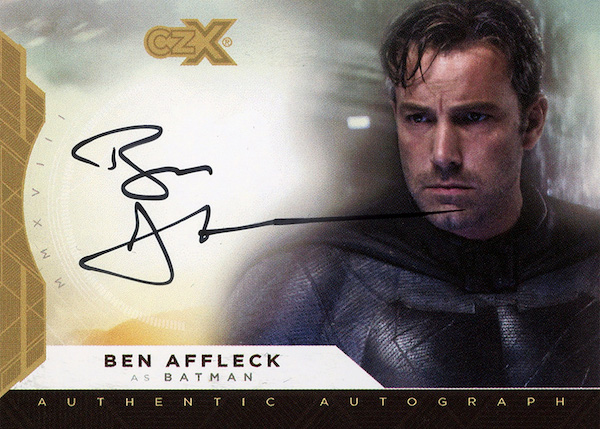 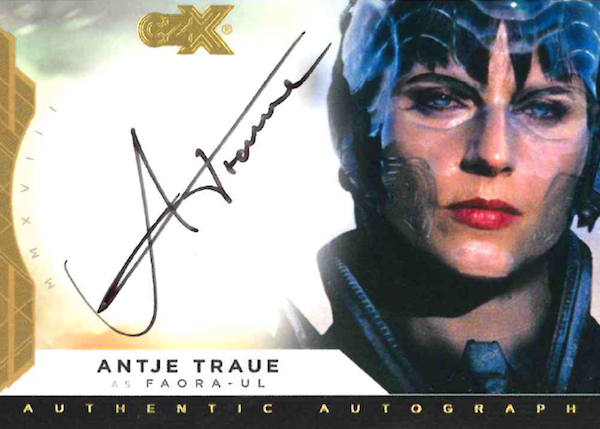 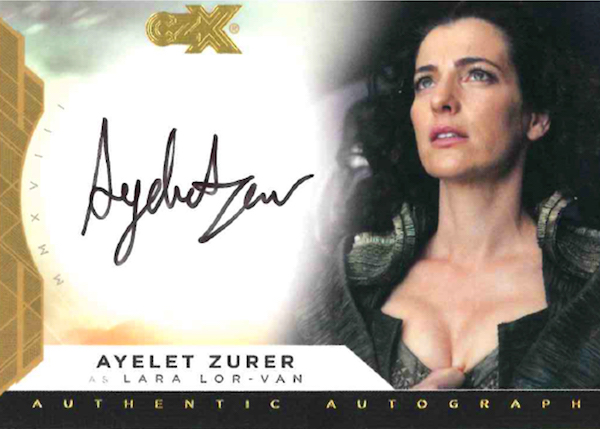 Raven
Is it just me or do those photos look more like sketches, especially that one of Antje Traue. Might be the way they are scanning. Anyway, 3 out of the 6 would be wanted. Guess which are which?

quote:
Originally posted by Raven:
Is it just me or do those photos look more like sketches, especially that one of Antje Traue. Might be the way they are scanning. Anyway, 3 out of the 6 would be wanted. Guess which are which?

That image of Traue she is wearing the suit with the 'helmet' so they could breathe Kryptonian atmosphere. That clear blue film mask makes it look like a sketch.
ravenheart
To be fair, it looked weird in the movie too.
Logan
Here's the full checklist with autograph print runs:

https://www.cryptozoic.com/sit...hv.web.checklist.pdf
Raven
Rather anti-climatic on the autograph checklist side. Despite the hint of others to come, all the signer's names seem to have been out there and the number of total copies from all card versions give you a pretty good idea of the autographs you will most likely pull.

Good news is that Jason Momoa has 215 cards over 3 versions and Gal Gadot is not too bad with 144 copies over 3 versions. Less good is Henry Cavill at 120 over 4 cards and Ezra Miller at 110 over 3 cards.

Ben Affleck did a big 30 autos over 3 cards and the dual signature Gadot/Cavill turns out to be 5 copies.

The rest of all the common signers left range from a low of 205 cards from Zurer to a high of the combined cards totaling 420 copies each from Carbonnell and Morrison.

I really think a lot will depend on the quality of the sketches to make up value in these packs. There are a lot of great actors included in the CZ STR PWR chase set, but not enough of them signed in this set. You have only the 5 big signers and Affleck barely counts. The chance of pulling one of them might be enough of an incentive in a regular premium product, but it's hard to make an argument for risking it at this box price. The only way I can see it happening is if every sketch can go for at least $100 on its own.
ravenheart

quote:
Originally posted by Raven:
I really think a lot will depend on the quality of the sketches to make up value in these packs.

They've posted some more sketch previews too. If we assume the ones posted are the best of the bunch, then some are very underwhelming.