More TFA autograph signers but most aren't key names. Billie Lourd (Carrie Fisher's daughter) is probably the biggest of the new names to this set. 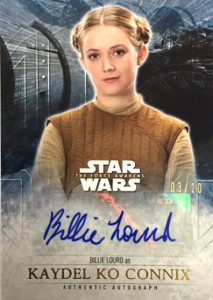 Tollickd
I am very tempted but the quote I got was 139 euros her box man that's not cheap but so,e good cards on offer
David R
What do the 5 Wal Mart exclusive Galactic Connexions cards look like ?

I have not see them on ebay or anywhere else
RedFive
I purchased a few of the 2-packs (jumbo pack) at walmart, and did not find any. The odds are 1:40 for the galactic connexions exclusives.
Drathro
Does anyone know an easy way to find the foils among all the base cards? My eyes are of poor quality.
<<<<ALDO_NOVA>>>>
Just opened my second box today, got a Peter Mayhew autograph card, at least I got something to save the 2 boxes I opened!