MarvelMorris
Violett Beane AKA Jesse Quick is also signing for the set.

ravenheart
I notice the release date is now just "2017". Same for Gotham.
ravenheart

ts
Funny this set seems more like an mix of Flash and Legends of Tomorrow.
ravenheart

quote:
Originally posted by ts:
Funny this set seems more like an mix of Flash and Legends of Tomorrow.

More Flash and Arrow really. Most of these aren't in Legends of Tomorrow more than the odd cameo, apart from Casper Crump, and people who were already regulars on Flash like Victor Garber and Wentworth Miller.
Logan

CordeliaChase_Fan
Grant Gustin just added to the list of signers. This is gonna be good.

quote:
Originally posted by CordeliaChase_Fan:
Grant Gustin just added to the list of signers. This is gonna be good.

And finally one of the DC-verse sets will matter.

Logan
According to The Cardboard Connection Grant Gustin signed only 4 of each of the 3 different versions for a grand total of 12 autograph cards. 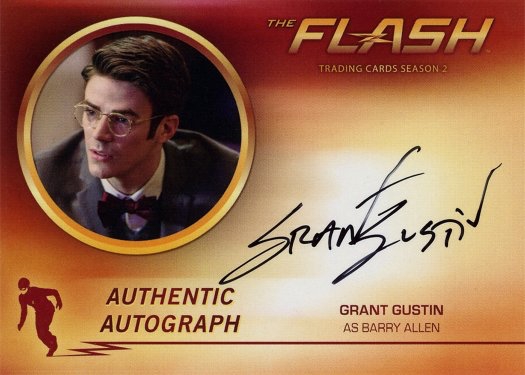 quote:
Originally posted by Logan:
According to The Cardboard Connection Grant Gustin signed only 4 of each of the 3 different versions for a grand total of 12 autograph cards.

If that is true, I wonder how card collectors feel when they hear such news? I know that I get annoyed when something I want is unavailable, then becomes available, but it is still out of reach. If it's not there, no one has it. Only now it is there, but you still can't have it.

I confess that these Flash, Arrow, Legends of Tomorrow, etc. TV series are full of actors that I never heard of before. To a lesser degree Gotham also has many unknowns. Whether that makes them up and coming stars or whether they just disappear after the show goes off, I don't know.

What I do know is that the stars are only worth the current high market price if you are a big fan of the show. No casual autograph card collector is going to take the risk of buying these cards for the actor at these prices. Now with Gustin doing only 12, if true, exactly how much is that supposed to cost when you don't pull it? Will he be the next Ford or the next Routh?

Same thing with the likes of Cassidy and the ladies of Gotham. They are high priced autograph cards and who knows where they will be in 5 years!
Obi Wan Chrisobi
If a card is that rare, it might as well not exist as far as I'm concerned. The rarity and potential demand for it is going to put it out of reach for almost everyone who is interested in this set and the autograph cards that are part of it. I can understand if Grant only wanted to sign a handful, but from a marketing perspective, I don't get why companies would want to alienate their customer base by making such extremely rare cards.

Hedgehog Witch
If that's true, then that's a slap in the face to collectors. A lot of people will feel like kids with their noses pressed to the shop window, looking at all the best toys they know they have no hope of affording or being given.

I watch these DC shows, but the actors can be really wooden and a bit cheesy, but they're an entertaining bit of fluff to watch that don't take too much thinking about.

I have no idea what on earth the deal is with Cassidy apart from her family name, nor some of these other newbie actors. As with most of these shows I tend to like the support cast more than the main character(s).
Good luck to those that want Gustin's card, though...but I fear it will be painfully expensive.
Ryan Cracknell
I can confirm there are only four copies of each card. Cryptozoic sent out word last night.

Tommy C
Another example of why people leave the hobby !

And please don't say "you don't have to have it." If you collect the Flash cards, yes, you do
ts
Seriously 12 cards?!? I mean how difficult could it be to sign 50 of them? Takes a few minutes longer.