Our stretch goal is to raise $5K to expand the set even more, which is already at 110 base cards. We have only 20 days to make it happen. Some of the rewards are limited to just three patrons, (make that two-- another one just pledged) so check it out soon if you like original art series and dramatic dinosaurs.

Thanks for all your support and Happy Memorial Day weekend! 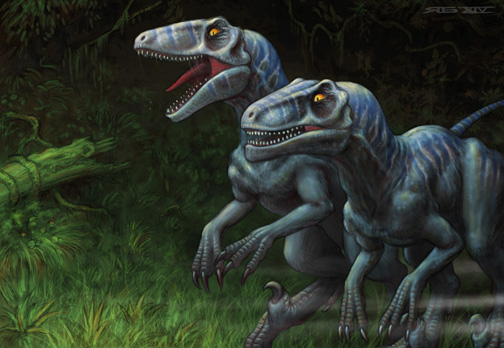 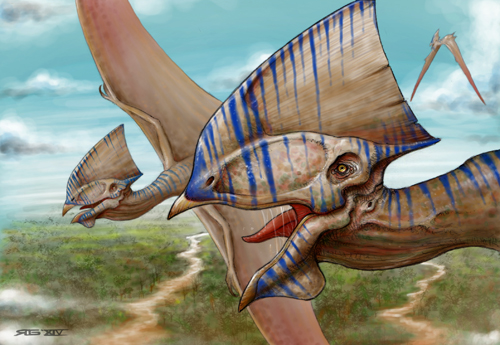 RRParks CARDS
The series looks stunning ... and of course, as always, Kurt's publishing/trading card philosophy is JUST what the hobby needs right now. I pledged yesterday -- and I hope others also recognize that we all need to be supportive of a publisher like Kurt and Monsterwax and show our support with a pledge on kickstarter. In the meantime, has everyone got their box to open for OPEN THAT BOX DAY? For my own box to open I picked up Monsterwax's 'Spook Show'.

H_Toser
I see Monsterwax is nearing 5K for this. Congratulations Kurt!! Good going.

We did a brief story on the project for the blog today:

Batjay
This is one set I have really been looking forward to getting. The images we have seen so far are just amazing to look at and I can't wait to see the rest of the set.
I put my pledge in as soon as I saw it had begun. The pledge options are pretty cool too.
monsterwax
Thanks everyone. I'm happy to report we've passed our $5K and $7.5K stretch goals. We're now down to our final week and have already passed $8,370.00.00. It has been very humbling to receive such support! 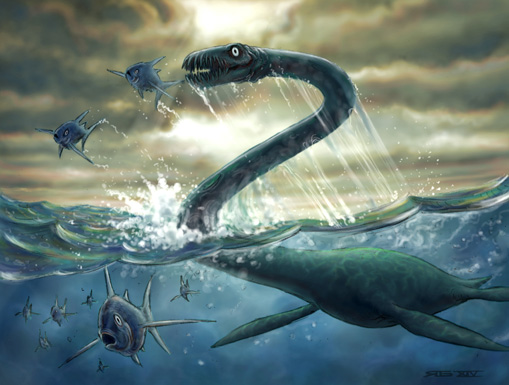 monsterwax
We are down to the final 4 days of the campaign and I'm very proud to announce the addition of world renowned paleoartist, Todd Marshall to our artist line-up. Todd has been a leading dinosaur artist for over 15 years, and well known for his breath-taking prehistoric masterpieces. (He is painting the Jurassic images for the series.) We would like to add even more cards to the series if we can reach our $10K stretch goal (currently just $1K away), so please share the Kickstarter link with any dinosaur fans to help make this goal a reality. Thanks to your help and support, this series keeps getting better and better! 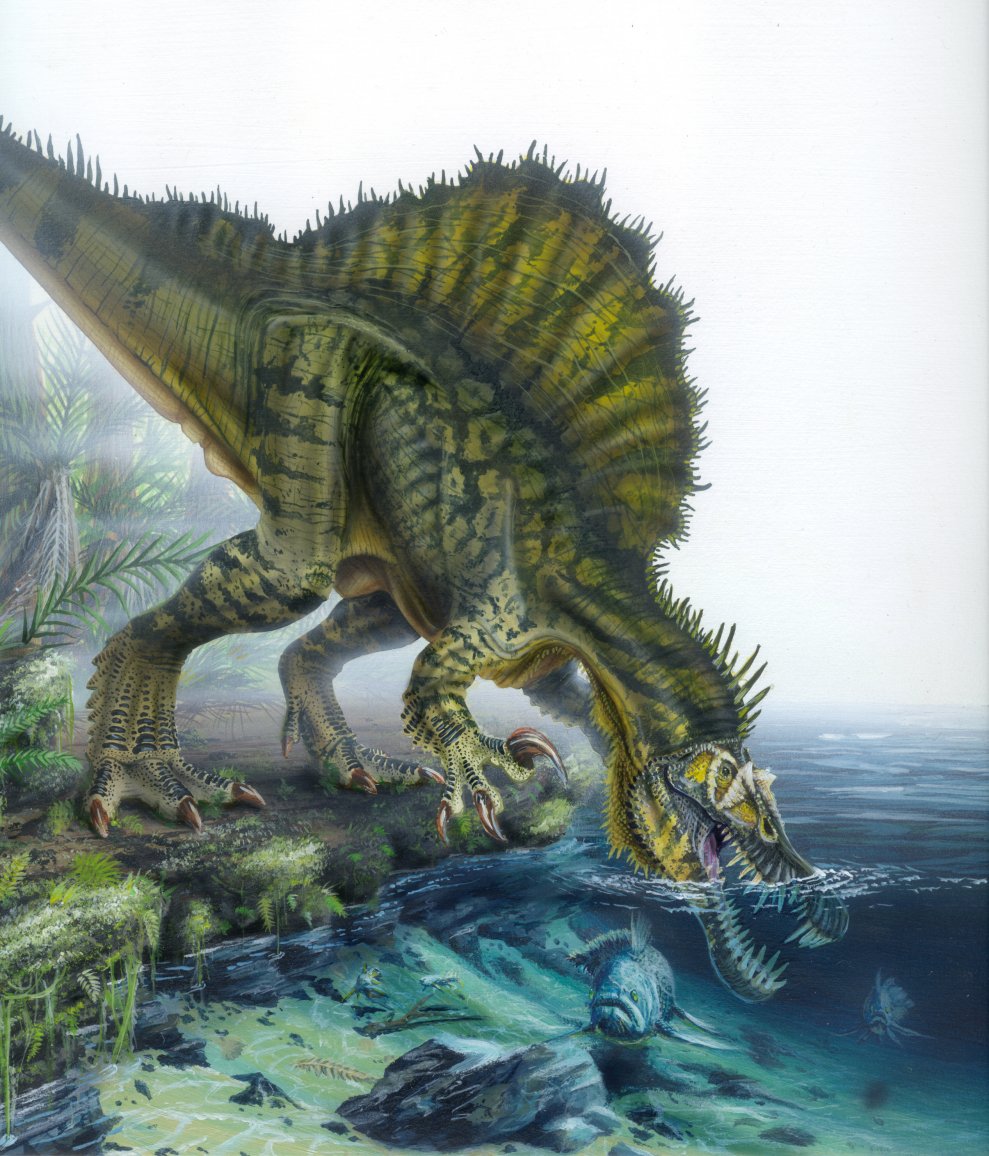 Mccheese8472
Going to be a great set!

monkeyafterdark
Not to be the nitpicky scientist in the thread, but shouldn't these dinosaurs have feathers all over? Hasn't their featheriness been firmly established by now?
Raven

quote:
Originally posted by monkeyafterdark:
Not to be the nitpicky scientist in the thread, but shouldn't these dinosaurs have feathers all over? Hasn't their featheriness been firmly established by now?

It all depends on which dinosaur breed you are talking about, but featheriness in general has not been claimed as far as I know. I will amend that as some sites seem to be suggesting the possibility, but it doesn't look as though it has been established anywhere yet.

In any event the cards look great and I would assume they are a lot more accurate than Jurassic World, which I hear is even sillier than the previous movies, if it's dinosaur facts that you are interested in.This message has been edited. Last edited by: Raven,
monsterwax
The current consensus is that over 30 species of non-avian dinosaurs had feathers (especially the smaller ones), but perhaps all of them. And to what extent is certainly debated. Many artists (under the guidance of their paleontologist patrons) have added feathers to certain areas of dinosaurs. Here is one of Ricardo's images of a Utahraptor with a feathered spine and forehead.

And here's an article on the subject:
Dino Feathers

monsterwax
We are only a few pledges away from our $10,000 stretch goal. If reached, we'll be adding a "Forty Favorite" sketch card subset. This is a really cool collection of the best original sketch card images to grace this series, many of which are amazing. The sketch artists outdid themselves on this subject, and it's clear they love dinosaurs. Collectors should get about 20 of the 40 in every box! Help make this happen by "sharing the love" with your dino-loving friends. There's only three more days to do it! 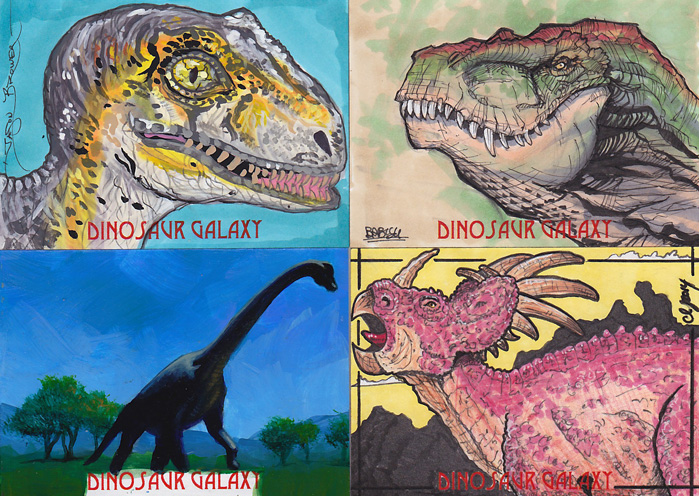 Wunder-sketches by Jason Brower, Kourtis Babisu, Ingrid Hardy, and Clinton Yeager-- among others!

But that's not all: We just added Luis Rey to our base card line up. Luis is a true classic dino-illustrator, creating hundreds of iconic dinosaurs for most of his life. We feel very honored to get both him AND Todd Marshall to bring this series to life. (Talk about luck!) Welcome aboard Luis and Todd! 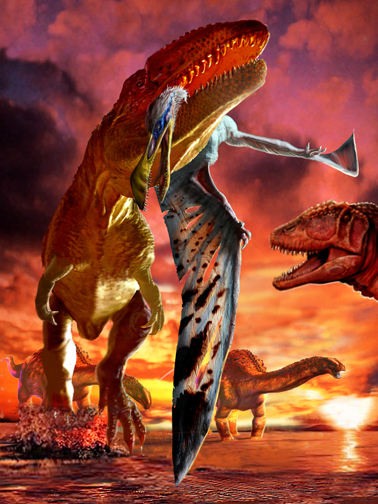 H_Toser
Congatulations to Kurt and Monsterwax on reaching $10K in the Dinosaur Galaxy Kickstarter. That's terrific.

There's less then a day to go now in the Kickstarter campaign. We put up a short piece about the project today on the NSU blog:

monsterwax
Thanks Harris, and thanks to all the NSU readers for their support. (The backer's list contains many names I recall from the Philly Show!)

FYI: to celebrate, we're offering 50 pairs of uncut sheets of the "40 Finest" original art cards that the Stretch Goal added to the series. Backers can add them on to their order for just $35 for one sheet (20 images of the 40 card series), or $55 for both sheets (all 40 images). Free shipping in the USA, too!

And to have some extra fun during our final hours, we're also offering three more of the Spinosaurus ($155) pledge and just two more of the Pteranodon ($550) pledge-- but with the "40 Finest" uncut sheets substituting the original uncut base card sheets (which are completely sold out).

Remember, backers can get these sheets as add-ons without having to change any of their prior pledges (just by adding the amount to their current pledge), but if they want to upgrade (and are lucky enough to get there while it lasts), they can upgrade with these two special pledge offers. (But they must have a pledge of some sort to get any add-on.)

Thank you all again. These artists have done a FANTASTIC job, and I personally appreciate your help in supporting them and their wonderful art.

monsterwax
Only five more hours to go for the Dinosaur Galaxy Kickstarter, and thanks to your help, we've realized all our goals for this series. Even more, in fact, with the unexpected addition of the mega-cool art by Luis Rey and Todd Marshall to our large base card line-up. That, and the "Forty Finest" sketch card subset will add a little more time to the series, but not much. We're planning to start shipping next month. Thanks again for your support, and if you want any add-ons to your pledge (like the "Forty Finest" uncut sheet), just add the amount ($35 for half the series, or $55 for both sheets) to your current pledge and we'll sort out the rest when we email the reward surveys. 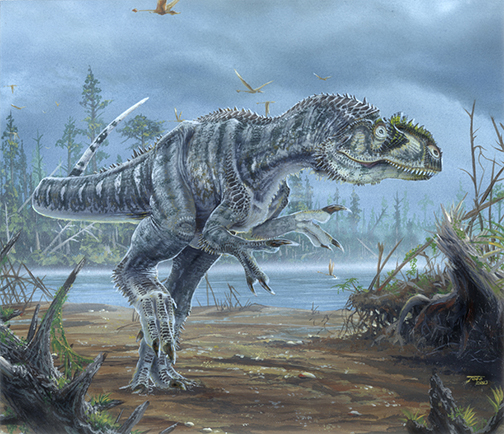 P.S., Maybe I'll see some of you tomorrow at the theater watching Jurassic World. (I'll be in the front row, cheering for the dinosaurs!)This message has been edited. Last edited by: monsterwax,