Non-Sport Update's Card Talk
Holy Grail Card(s)
This topic can be found at:
http://nonsportupdate.infopop.cc/eve/forums/a/tpc/f/954605353/m/9701099911
chesspieceface
Holy Grail Card(s)
Thank you, Richard, not only for the cards, but also for the excellent information you bring to this board.

Bunkie
Thanks Richard for all the hard work on The Stooges set.
WarriorBabe
This was a star addition to my Xena S2 auto collection (including Hudson Leick and Kevin Smith) a little before Christmas- many thanks to the seller who agreed I could have a little more time to pay, meaning I could bid and as it turned out, win! 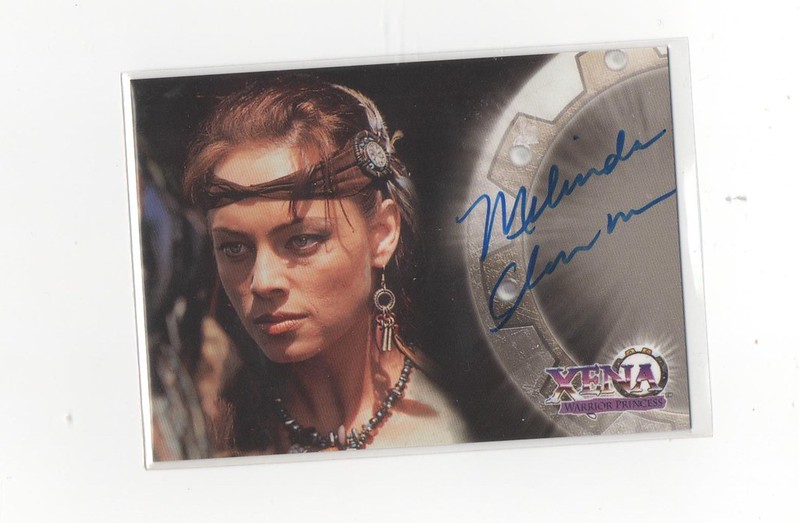 cardaddict
I like it! But what exactly is it? A personally signed base card? I'm not sure what you mean by an S2 card.
WarriorBabe
Sorry if I wasn't clear enough. S2 is Season 2 of the Topps Xena cards and this is the A5.

This set is pretty famous amongst fans I forget to explain it to those outside of Xena cards lol.

Triple-Frog
That card is one of the harder ones to find as it was a redemption, one of only two in the set.
I remember pulling it from the only box my local comic shop had in when they were first released and then having an anxious three month wait for Topps to redeem it.
cardaddict
Ok, now I get it! It's been awhile since I pursued any Xena cards, so I pulled out the binder and - sure enough - that's the only Season Two auto I don't have! One of these days...
nick9819
i just pulled a pen redemtion from the new dexter set (they only made 7) i am pretty excited!!!
collector of things
That's probably the one I need too, lol. For anyone who doesn't know, these were all blown out at one point as a dump (they were even being sold in lots of 10 the same on e-bay) and the seller only had 11 of the 12 auto's for sale. As a result, we all need the same one... I picked up a huge lot of Wild Wild West movie auto's in a similar blowout fashion once, and instead of dumping them on the 'bay, just started giving them away. I've still got more than 50 Musetta Vander's left even after all these years... Don't over pay on the Xena's!--Chris

I picked up a huge lot of Wild Wild West movie auto's in a similar blowout fashion once, and instead of dumping them on the 'bay, just started giving them away. I've still got more than 50 Musetta Vander's left even after all these years... Don't over pay on the Xena's!--Chris

I think you sent me some of those wild west ones Chris if memory serves.
The only Xena 2 I have is Hudson Leick and I think I got that when they were dumped.

WarriorBabe
I also got Hudson Leick and Kevin Smith when they were dumped.

Not to make anyone jealous but I paid less than £85 on the Clarke, including fancy tracked shipping.

cardaddict
I did a bit of research, and now realize just how difficult that Melinda Clarke autograph is to find. Even though both her and Bruce Campbell were redemptions, he's all over the place and she is as scarce as ice water in Hades. Great find!
WarriorBabe
Thank you, it was indeed

Fantastic price. I have only seen maybe 2 others for sale over the years.

Again I say thank you to the seller whom I asked prior to bidding if I could be allowed a few days extra to pay. As their agreement made my winning bid possible and I think this will quite possibly be the jewel in my (extensive) Xena card collection.

cardaddict
Now I am curious. I looked at my want list and I need 15 cards to complete my Xena collection. I did NOT do the Art & Images set though. How many, if any, to finish yours?
Juelle Lou
I received one of my holy grail cards today.

cardaddict
Wow, I love it! That's a rare one.
Juelle Lou
Yes, I was extremely happy to finally acquire one of these for my collection.
Raven
Congrats, I've been lusting after that Janssen too. Maybe someday.

CordeliaChase_Fan
I've been lucky and did manage to pull my two most recent holy grail cards from either pack or box purchases. I pulled the Whoopi Goldberg as Guinan Autograph Card by buying a ton of packs from my job of Star Trek: Aliens and I pulled the Katie Cassidy as Laurel Lance Autograph Card from a box of Arrow Season 1 Cards purchased by my co-worker for my birthday.