Non-Sport Update's Card Talk
Oddball cards
This topic can be found at:
http://nonsportupdate.infopop.cc/eve/forums/a/tpc/f/954605353/m/7497050696
JOHN LEVITT
Oddball cards
Ah! Chaka Khan I saw her perform sometime in the seventies at the Roundhouse, London at a Warner Bros show that featured several of their acts on a promotional tour.

Many thanks Jess for the reminder. I have a vague memory of the card set as well and the UK Card Dealers catalogue I have lists it as being issued in 1987.

catskilleagle
Here's a card of unknown origin. It was advertised as an Elvira lenticular promo last year or the year before. On the back Robert Strauss is credited as the photographer and the copyright is "1982 Elvira Merchandising, Inc., Action cards, Printed in the USA, 1982 International Visions" with a Redondo Beach, California address. It might have been inserted with a product or perhaps given out at a trade show. 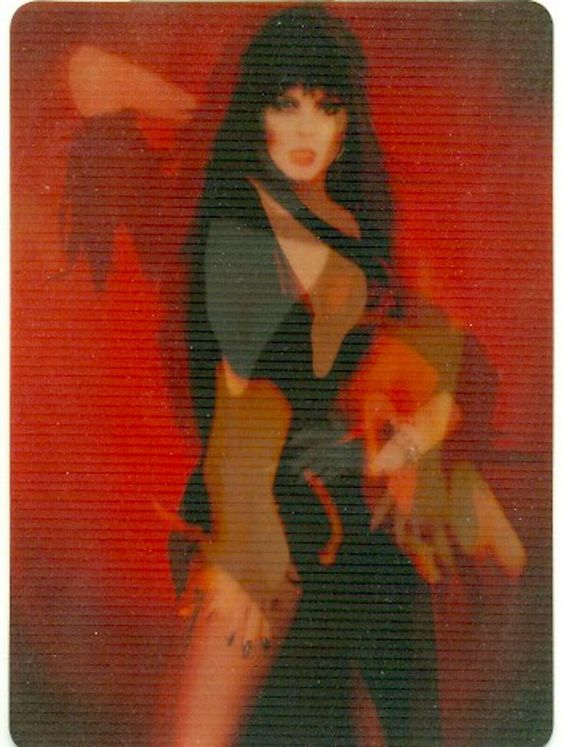 catskilleagle
Thanks, John. Chaka Khan is one of those performers famous for her time in a band (Rufus), for her time as a solo artist, and as a guest vocalist in several songs like "Higher Love" with Steve Winwood.

I read that Supertramp has a card in the set which I thought was strange as they didn't really have any hits in the mid-late 80's. They were still touring in '87, though - still famous enough.


quote:
Originally posted by JOHN LEVITT:
Ah! Chaka Khan I saw her perform sometime in the seventies at the Roundhouse, London at a Warner Bros show that featured several of their acts on a promotional tour.

Many thanks Jess for the reminder. I have a vague memory of the card set as well and the UK Card Dealers catalogue I have lists it as being issued in 1987.

catskilleagle
Here's a 3 1/8 x 4 1/4-inch sticker that promotes a 1997 Christmas tour of Japan by "Lizards" which I assume was a 90's band. It appears it broke up before the internet could save a song they recorded or even a low-res photo of them. This is the kind of thing Todd hasn't listed in the Promo Card Encyclopedia because there are thousands of garage bands, indie groups with a cult following, and one-hit wonders that have printed up cards and stickers to promote themselves. If he included every one we've found, PCE would be a multi-volume set filling a bookcase shelf. With that said, any card or sticker with Godzilla or a Godzilla-like monster on it is worth preserving in some way. 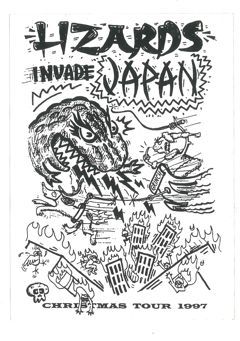 This message has been edited. Last edited by: catskilleagle,
catskilleagle
This is a dual-image lenticular card (U.A. Pictures Inc. 1987) showing the Pink Panther spinning and winning a jackpot, but instead of money, a bunch of fruit pours out. The back is mostly blank but says, "Toppan Top Stereo...Copyright and Exclusive Sale by: Printing Studio AG with Swiss and German addresses.

Toppan had been selling lenticular products since the 60's including postcards with pre-printed lines for an address or blank backs like this one. Though the card has Swiss and German addresses, the company is based in Japan. 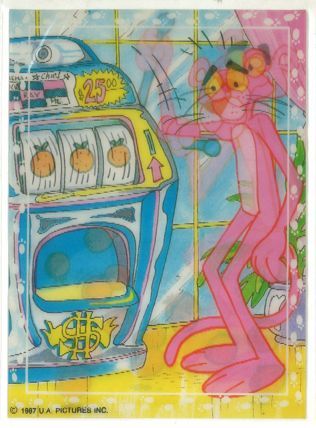 catskilleagle
I'm not sure if this card is a promo or not. It's #9 from a 28-card set available at the NFL Experience in January 1992 which was the first year of the annual event (now called the Super Bowl Experience). The cards were in a sealed plastic pack and measure 2 1/2 x 4 3/4 inches. Instead of player or game photos the fronts feature artwork by various artists. 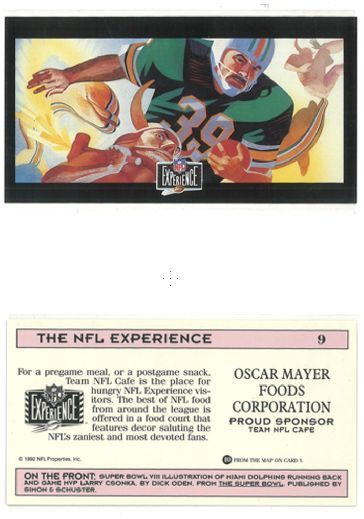 catskilleagle
Here's a card from the Raiderettes (Oakland Raiders Cheerleaders) Millennium Edition set (Boathouse Row Entertainment, undated but it was for the 1999-2000 season). You could buy singles ($4-5 each) when cheerleaders made promotional appearances at Raider Image stores in the San Francisco Bay Area and they would sign them. You could also buy sets through the mail. There was a 47-card set for 1997-98 and a 50-card set for 1998-99. I don't know the set number for the Millennium Edition. All the cards were 8 x 10 inches and were separate from the 8 x 10 photos they also sold.

You could find cards from the three sets occasionally on Ebay in the early 2000's but I haven't seen any for sale in years. 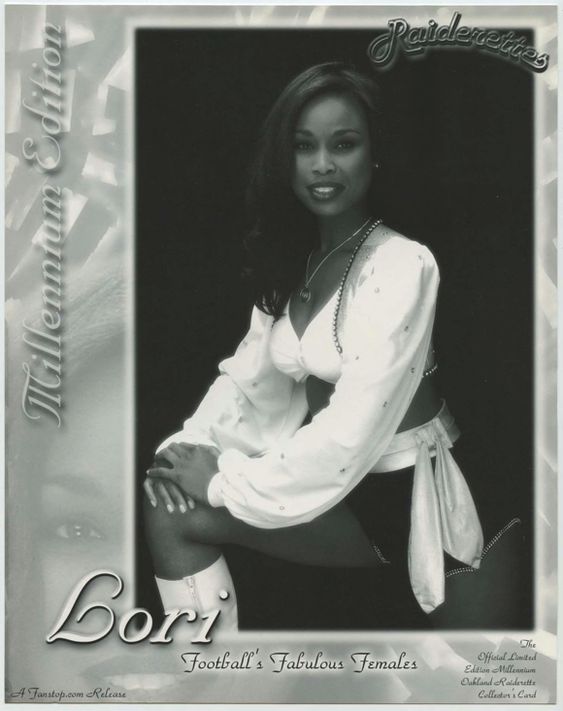 You might find the Italian PMC card if you search for or ask around about Piemmeci cards.

quote:
Originally posted by STCardGeek:
First of all, I love the idea of people pouring through the binders trying to find something I don't have. How else will I find things!
Alas, that one is there under phone card, though it's not really a phone card, I suppose.
I am going to include my want list here since it's mostly oddball stuff, however this is for informational purposes only as I think it shows what is challenging to find! I am not trying to solicit on NSU!

catskilleagle
Here's a sticker (no year but was 1999) that promotes the then-new Robert Bane Global Gallery website. It was given out at the 1999 Playboy Expo and the 1999 San Diego Comic Con. It measures 2 3/4 x 3 3/4 inches. I think it was the first time the dealer went online. 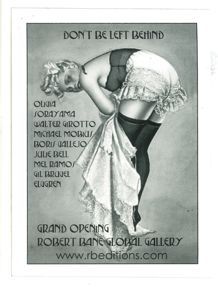 catskilleagle
Here's a weird one. It's a bookmark on the front and a functional postcard on the back. It lists some Cardlynx trading card sets on the front as well so I assumed it was a promo item but learned later that it's one of a set of 6 bookmarks that was for sale. Each one measures about 1 15/16 x 6 5/8 inches or 80 x 170mm. 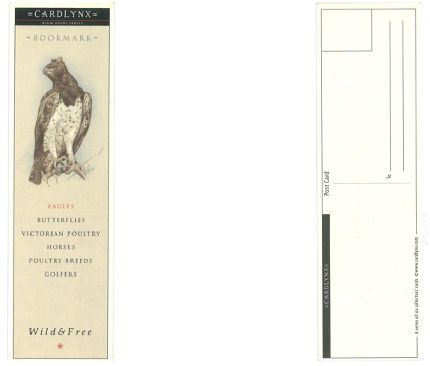 catskilleagle
Here's one from a 6-card "El Cid Production Stills" set which was inserted with the "El Cid Limited Collector's Edition" DVD. Each card shows a scene from the 1961 movie and measures 4 3/4 x 6 3/4 inches. The cards are blank-backed and undated but the DVD packaging is marked 2008. 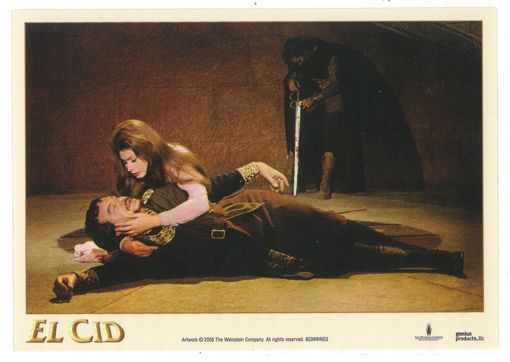 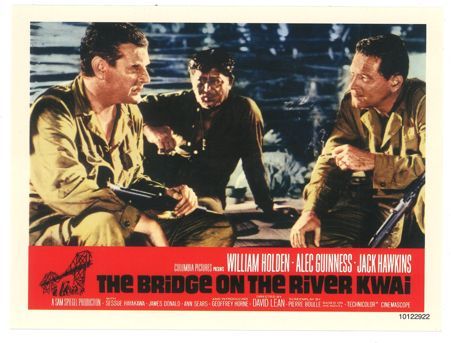 catskilleagle
Here are the front and back of a promo for "A T. rex named Sue," a traveling exhibit featuring a Tyrannosaurus skeleton. This card was given out in 2015 at the Florida Museum of Natural History in Gainesville which was one of the stops during the tour. It measures 4 x 9 inches. The museum has often made a special card and a bookmark for temporary exhibits. 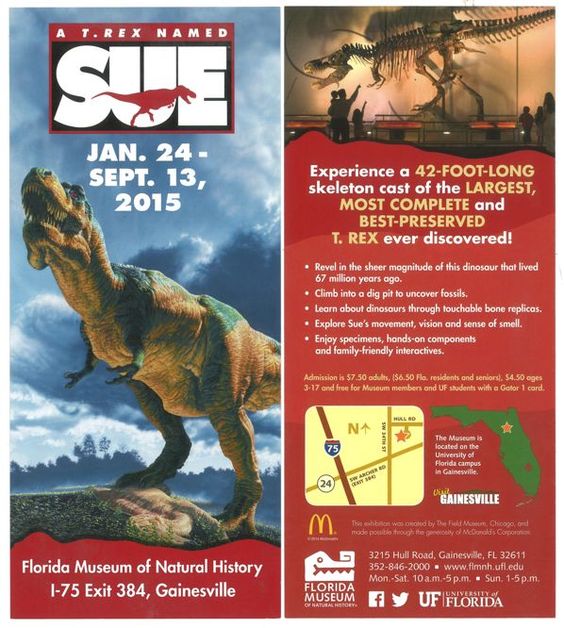 catskilleagle
Here's a "Lion King 2: Simba's Pride" promo sticker sheet (Disney, no year but it was 1998). It promotes the video release of the animated movie and was sent to Disney Movie Club members. It contains die-cut stickers and measures 4 x 6 inches. 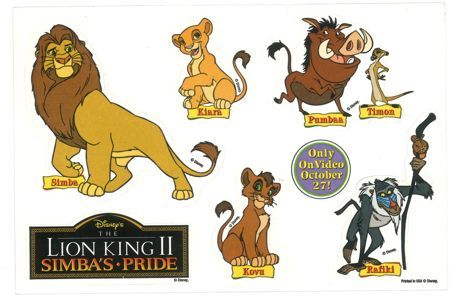 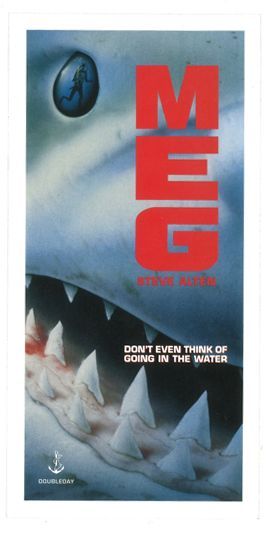 catskilleagle
Here's another promo sticker sheet sent out to members of the Disney Movie Club (Disney, undated). It's a sheet of die-cut stickers that measures 3 7/8 x 9 inches. One of the stickers says "My 4 movies" as a reference to the movie club program in which you can pick 4 movies for a total of 1 dollar but then you also have to buy a certain number of other movies each at full price over the next couple of years.

catskilleagle
Here's a sticker of the NASA logo given away at events where NASA set up exhibits. I think I got this one at a USGS open house or maybe a local air show. It's a die-cut sticker measuring roughly 3 9/16 inches in diameter on 4 x 4 3/4-inch backing. 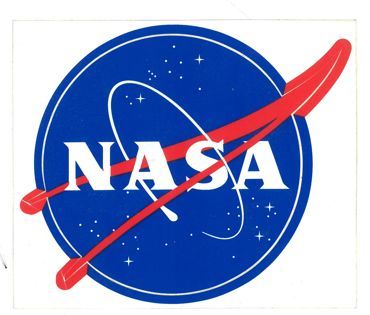 catskilleagle
Here's a sad memento in the trading card world. Versatile comic actor and well-remembered SNL cast member of the late 80's-early 90's, Phil Hartman, intended to sign official autograph cards for the "Small Soldiers" card set (Inkworks, 1998). Tragically, he was murdered that year. The cards didn't get signed but were printed with his birth and death year and distributed to dealers as a memorial card instead of being inserted in packs. 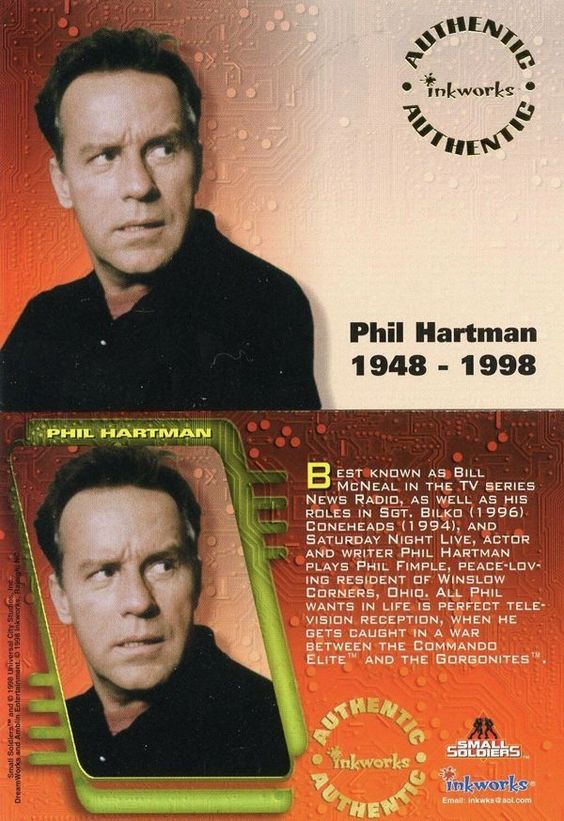 catskilleagle
These are cards from 1998 and 1999 given out at the Dark Horse booth at San Diego Comic-Con those two years. You're supposed to cut out the finger puppets, but of course, because they're in card form, many collectors kept them as cards. They are similar but one says "Dark Horse Maverick" at the top (given out at the 1999 SDCC) and the other one doesn't (given out at the 1998 SDCC). The backs are different too. There were 4 in the 1998 set and variants of the same 4 the following year. 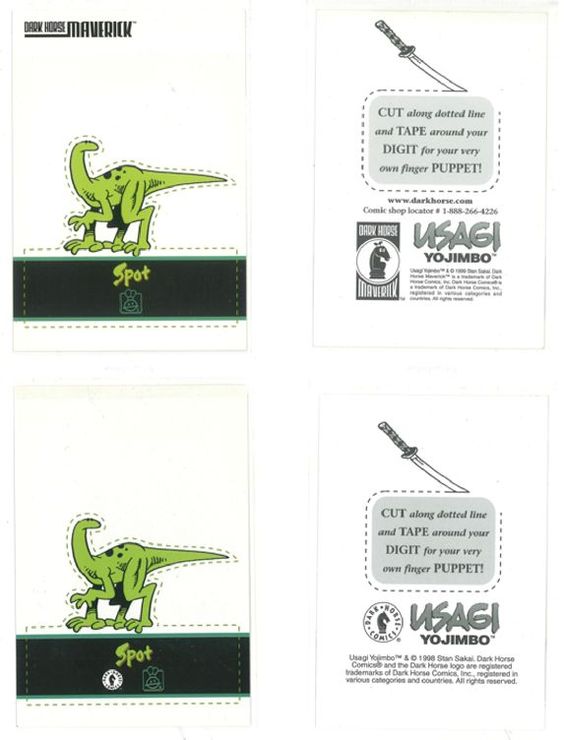 This message has been edited. Last edited by: catskilleagle,