Non-Sport Update's Card Talk
Oddball cards
This topic can be found at:
http://nonsportupdate.infopop.cc/eve/forums/a/tpc/f/954605353/m/7497050696
catskilleagle
Oddball cards
It looks like a bookmark (measuring 2 1/2 x 7 inches) but it's considered an FPG promo card and was given out at a show in 1994. I've seen other bookmark/cards. FPG did one with Janny Wurts artwork.

This one doesn't promote a particular product though it features Ken Kelly art with his name prominent on the front along a mention of a card dealer.

You can still use it for a bookmark if you want.

catskilleagle
Here's a card a friend gave me with a handful of base cards. I overlooked it at first as a base card from Marvel Universe 1. If I'd looked closer, I would've noticed the extra text on the front. The card happened to get flipped over and I couldn't help but notice the completely different back. As you can see, it's actually a recent promo/business card for the House of Cards (a trading card store in Las Vegas, Nevada) done as a spoof of the well-known Marvel series. 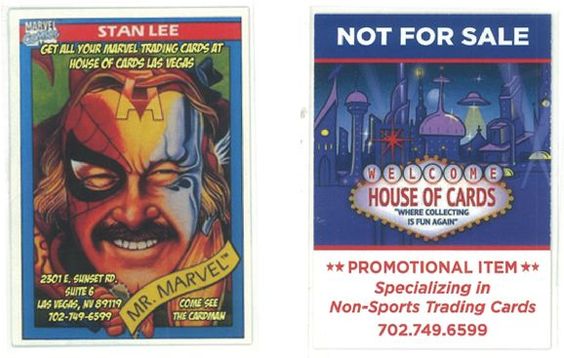 Raven
Not sure how recent that promo/business card is Jess. Just went to their website to look around and it's still there, but nothing seems to work. I put in a few mainstream titles in non-sport and nothing came up at all. On Facebook but no activity in 2021 that I could tell. Admittedly social media is not my forte.

catskilleagle
Yeah, I checked out the website too and nothing came up in a search. The store advertised in the most recent issue of The Wrapper. Website maintenance is tough enough for a large company but can be a real pain for a sole proprietor or small company.

quote:
Originally posted by Raven:
Not sure how recent that promo/business card is Jess. Just went to their website to look around and it's still there, but nothing seems to work. I put in a few mainstream titles in non-sport and nothing came up at all. On Facebook but no activity in 2021 that I could tell. Admittedly social media is not my forte.

catskilleagle
Here are the front and back of one of the promo stickers for "Mission Hill" (Castle Rock Entertainment, 1999), a cartoon that turned out to be short-lived. At least two different stickers have been seen but rarely these days. They were given out one per attendee each day at the 1999 San Diego Comic Con. I think one was in every souvenir bag with the show guide and an X-Files scratch-off card. They are unnumbered and measure 3 inches in diameter. 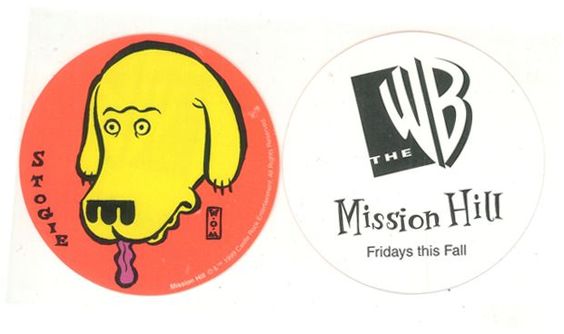 catskilleagle
Here's a card listed in PCE2008 as a promo for the "Coin Cards" trading card set (Liberty Bell Products, 1991) and is also a creatively-designed business card given out by people representing the card maker, Liberty Bell Products. It has an image from the "Coin Cards" set on the front with contact info on the back and it's standard trading card size at 2 1/2 x 3 1/2 inches (larger than a standard business card).

I've seen a few cards like this - business cards made more memorable (and collectible) because there's artwork or photos on the front. 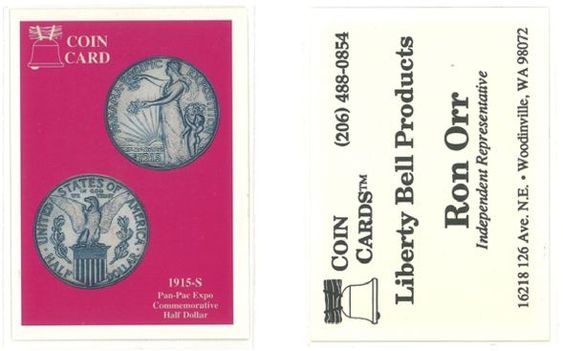 Batman
Mission Hill was great, thanks for posting the sticker!

catskilleagle
You're welcome. Yeah, there are so many shows that had short runs. Maybe if "Mission Hill" had debuted on a different channel or late at night or a couple of years later, it would have caught on with an audience. In the 70's, a show might go a year and it would get renewed because it showed some promise despite unspectacular ratings. "Seinfeld" is the most recent show I can think of that was given time to pick up an audience and it paid off big for the network. More recently, I've seen shows axed after a single episode.

Yeah, there can't be too much Mission Hill merchandise out there.
catskilleagle
It's not really a card but a window decal (Dark Horse Entertainment, 2006) promoting various Dark Horse Comic series. Some people who collect Dark Horse comics and/or cards also collect the posters and other promo stuff, keeping the decals intact though they don't display well with the reversed graphics and somewhat foggy front. They are said to have been given out at shows - a series in 2005 and one in 2006. They measure 3 7/8 x 4 3/8 inches. This one promotes "Usagi Yojimbo." Here's a list of the ones I've seen. 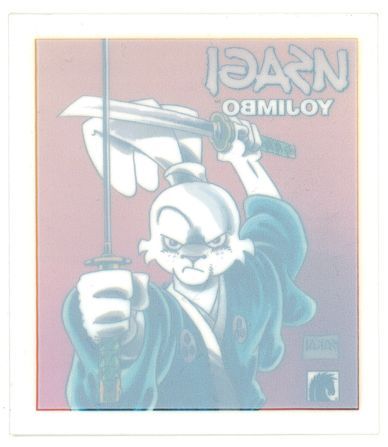 This message has been edited. Last edited by: catskilleagle,
catskilleagle
Here's #04 from a 13-card set of 3D cards featuring Looney Tunes characters. They were inserted in Fontelle Mini-Treats packages in Australia. Twelve of the cards measure 2 1/8 x 3 1/2 inches but one is oversized and harder to find. They are undated but the promotion was running in 2011. The 3D effect has a nice depth that doesn't really come through in a scan - unusually good for a food insert. Daffy Duck is clearly in front of Bugs Bunny and that green background is clearly well behind Bugs. 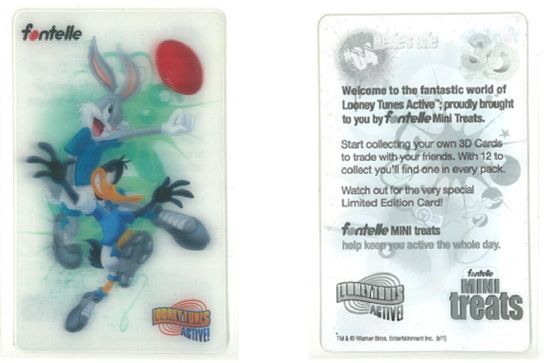 webjon
Those Fontelle cards look really cool!
catskilleagle
Here's a card listed in PCE2008. It's a promo phone card for the movie, "Frequency," released in 2000. It was given out only at advance screenings and measures 2 1/8 x 3 3/8 inches. This one still has the side piece that you snap off to peel off the backing so you can use the card. 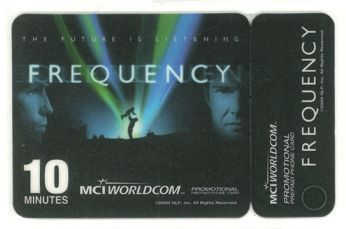 catskilleagle
We've talked about unsigned autograph cards before in this thread and elsewhere. This one was printed and intended to be signed by Edward Woodward for "The Saint" card set (Cards Inc., 2003). As has been said already but repeated here in case someone hasn't heard, card companies print more autograph cards than end up getting signed. Usually, the extras get thrown away but sometimes they sit in a box and are forgotten.

In the case of a card company going out of business, company items sometimes leak onto the market as individuals try to salvage some value out of what's left. Of course, the danger is someone could forge a signature on one of these cards and try to sell it as an official autograph card and it would be tough to spot as a fake. The only thing that keeps that from becoming a noticeable problem is that sellers tend to want almost to about as much for a card meant for a big celebrity as what the actual autograph card goes for. Some collectors want them as a variant but don't want to pay a lot so many of the unsigned have not been big sellers, tending to go unsold. 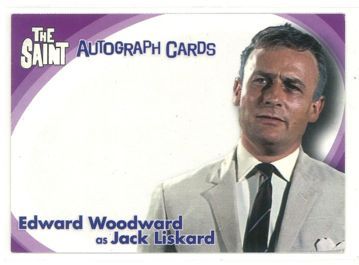 This message has been edited. Last edited by: catskilleagle,
Raven

quote:
Originally posted by catskilleagle:
We've talked about unsigned autograph cards before but I note them in this thread in general because they are another category of oddball card. This one was printed and intended to be signed by Edward Woodward for "The Saint" card set (Cards Inc., 2003).

Well when you say "intended" I hope you mean that others were signed and not just that none were signed, because I have this SA20 card with an autograph. Can't remember where I got it, been a long time, but it certainly compares to his signature.

However I don't see the card signed on eBay, just another blank. Could it be a fake? Did he sign some for iCards?

I hate blank certified cards just for that reason. If card makers want to leave them lying around, have the sense to brand them blanks. Of course they don't and you can wind up with a fake signature on an authentic card, worse combination years later. Hope I don't have one. If any Saint card collectors know, please chime in. Always liked Woodward for the Wicker Man.
wolfie
Darren would know but i'm not sure quite where he is right now. With a bit of luck he might see this or be told about it.

JOHN LEVITT
We covered this card and others like it on page 10 of blog PCE 2008, additions, deletions and corrections. I tried doing a link but it did not work so apologies.

Yeah, I think card companies should have just had them stamped "void" or similarly embossed to obstruct someone from adding a signature later as I think you suggested in another thread. At that point, give them out with purchases or just throw them out. I think stuff like that sometimes just gets stuck at the bottom of a pile in a storage area and everyone forgets about it as they move on to the next project.

Todd Jordan noted that 200 were signed for "The Very Best of The Saint" in "The Encyclopedia of Non-Sport & Entertainment Trading Cards" (Non-Sport Update, 2007). Allender notes the same number adding that the card was not in packs and was sold separately.

I knew Woodward from the American 80's TV series, "The Equalizer," which was a good show. I liked the first movie with Denzel Washington (haven't seen the second yet) and like the current TV version with Queen Latifah as well.

JessThis message has been edited. Last edited by: catskilleagle,
Raven
Great, I'm going to assume it is one of the 200. I know I never bought packs from any of The Saint products, but I have a few of the signers from that Saint purple design, Blair, Bate, Graham, Andre, maybe some more. Must have found them at a show. Used to pick up anything signed that didn't break the bank.

Should have checked Allender's first instead of eBay. Thanks for the responses guys.

catskilleagle
This is a promo sticker for the "Indiana Jones Adventure," a park attraction at Disneyland. It's undated but it was available in late 1994 and/or early 1995. The die-cut sticker measures 3 1/8 inches in diameter. With the backing, it's 3 5/8 x 3 5/8 inches. Most of these stickers were stuck on the front of a media guide so you don't see too many floating around. 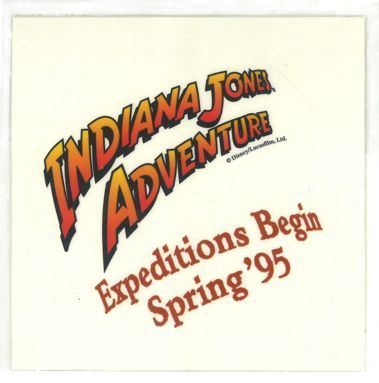 catskilleagle
Here's one from a 56-card set, "Rock 'n Bubble," (Dandy, a candy maker in Denmark) which was issued in 3-card packs with a piece of gum in Canada and the United States. The cards are undated (but said to be 1986 or 1987). There are 13 cards in each suit (hearts, diamonds, spades, and clubs) and 4 known Jokers. They feature photos of recording artists of the mid-1980's and are done in an overall playing card style though they are smaller than a standard playing card, measuring just under 2 x 3 inches, or more precisely 50 x 75mm.

I don't remember seeing these cards in my area. 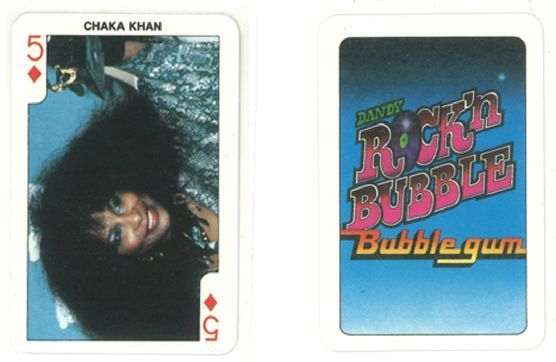