quote:
Originally posted by mykdude:
I figured it might be a good idea to start a thread for projects centered around our card collecting.


Not so much a project, as it is a collecting theme -- magicians on trading cards. All of these people have performed magic at a serious or professional level at some point.

Cool theme idea.
You can maybe add a Steve Martin card to the collection. He did it at Disneyland for a few years.
https://d23.com/walt-disney-legend/steve-martin/

I once saw Andrew Yang ridicule bing.com but I have noticed that you can get a different mix of results in a bing search including some relevant ones that didn't appear in a google search. It's often worth doing.

quote:
Originally posted by Raven:
Forget about the cards, where'd you get the sketches? You do them? They look like different styles, but I really like them, and the whole display is impressive.

Haha! I wish. Many different search criteria on the google machine. Was actually going to use the one sitting in the chair for Samantha until I found the one at the bottom. The one of Barbara Bouchet was a last minute find as well.

quote:
Originally posted by Bill Mullins:
In this pair, the custom is definitely a more appealing card. But the major custom producers have a limited design scope as well. Portrait with the top 2/3rds fading into a white space. If you go to Blowout and look at the large collections, they are very repetitive.

Not sure if we are looking at the same BO thread but those are pretty much from the same person and yeah....he seems to be stuck in a design rut. The ink doesn't seem to take well on some of them either. The two I have are the thickness of a costume card but I got them from someone else. A home solution that can print like that is major bucks. If someone is printing for him he may not have many options. Or he is just a big Rittenhouse fan.

For me the image I decide to use often determines what it is going to look like. But I am in that phase where I am still making a list of do's and don'ts.

Not so much a project, as it is a collecting theme -- magicians on trading cards. All of these people have performed magic at a serious or professional level at some point.

No, this is part of what I was talking about. A project most certainly is collecting in very specific groups. I'm currently putting Bond Girls in groups of the actor who played Bond.

Where did the Harry Anderson come from, don't recognize that design?

Is that Stephen Fry? Pretty sure he has an autograph card.
Raj

Is that Stephen Fry? Pretty sure he has an autograph card.

In either The Hobbit or Lord of the Rings.
Bill Mullins

quote:
Originally posted by chesspieceface:
You can maybe add a Steve Martin card to the collection. He did it at Disneyland for a few years.
https://d23.com/walt-disney-legend/steve-martin/

Oh yeah, I've got a number of Steve Martin cards. He's in StarPics SNL, Little Shop of Horrors, Sgt Peppers, Inkworks Looney Tunes (including an auto), Playboy Chromium Covers, Warner Brothers promos, and probably more.
The collection is much bigger than these two pages. I just linked these because I had recently posted them to a FB magic collecting group, and could paste in the URLs easily.

quote:
Originally posted by mykdude:
Where did the Harry Anderson come from, don't recognize that design?

It's from a board gamed, called "Face to Face", I believe. He's also got some Leaf Pop Century signed cards, which I'm sure you knew about.

quote:
Is that Stephen Fry? Pretty sure he has an autograph card.

Yes, that's Stephen Fry, from the Cryptozoic The Hobbit: Desolation of Smaug (and yes, he's got an auto in the set.) While he was hosting the British quiz show QI, he did some magic tricks on screen. This resulted in his becoming a member of the British magician's society, The Magic Circle. (Prince Charles is also a member.)
mykdude
Ran through a couple different designs but finally settled on this one.

mykdude
Not sure if Topps is ever going to continue with the Walking Dead. Decided to create this for a local Con in April

Currently have my home printer cranking out 28pt card stock. 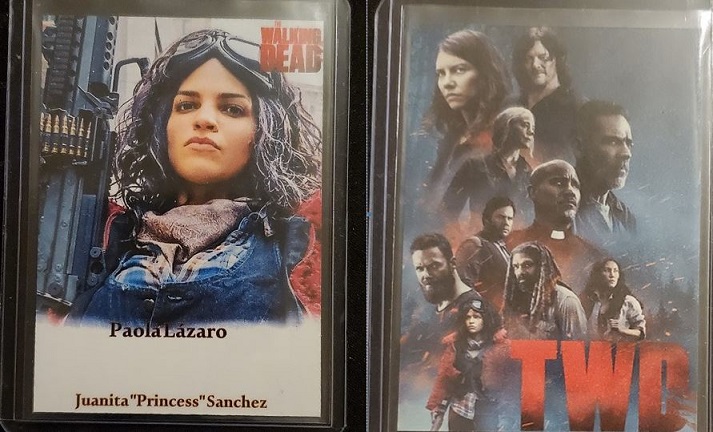 Great FORBIDDEN PLANET card!
mykdude
Thanks! This is the completed cast. 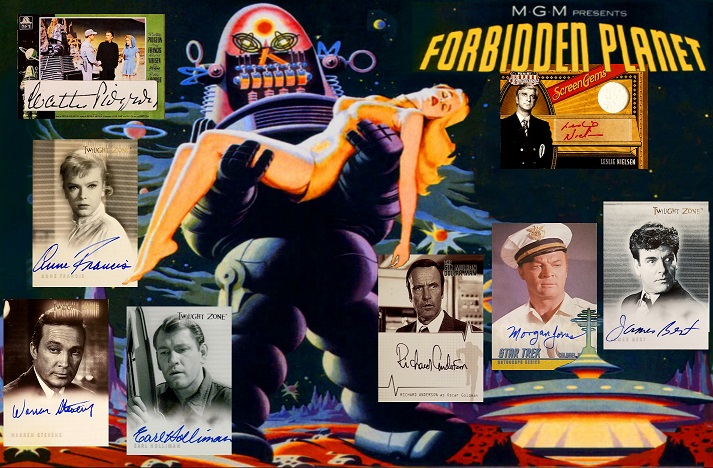 cardaddict
Beautiful!
One of my top 10 all time favorite movies.
mykdude
Yeah definitely a major influence on the modern science fiction film era.

Much thanks to RA for preserving a cast that is 66 years old.
wolfie
That looks really nice. I also have that Anne Francis card, that is very nice as well.

cardaddict
We can only hope that one day the lost footage of her doing the "Morbius Strip" dance sequence is found!
Raven
Congrats on getting all those signed cards, but I have a bone to pick on your choice of background.

That ain't Robbie. Robbie was a nice boy.

If that's an authentic image from a promo, someone was playing around for maximum effect because it's not even close to the actual scene.
cardaddict
That's from the original one-sheet, trying to draw the people inside!

I sure wish I had one of those!
Raven
Yeah, if I remember correctly Robbie carried Warren Stevens in after he tried the machine, not sure if he ever picked up Anne Francis. I did see that image on the Wiki page. Robbie should be insulted.

I remember once having found an original Robbie the Robot battery operated model a long time ago. I think it's worth something, but darned if I have any idea where it went.
cardaddict
I just counted.
I have 13 Robbie the Robots and an equal or greater number of B-9 robots, plus other, miscellaneous robots.
I don't WANT to have them, but they MAKE me buy them!!!!!!
mykdude
I did play with a few different designs. Being a fan of posters using images that never happen in the film but used to draw people into the theater I thought this one was fun.

I still love the film but being brainwashed by so many great soundtracks over the years I find the sound effects to be a bit annoying. Has anyone ever re-scored it? Robby sounds like a hand crank calculator.

Always thought a modern prequel could be interesting.