Non-Sport Update's Card Talk
Marvel Masterpieces 2007 (Upper Deck)
This topic can be found at:
http://nonsportupdate.infopop.cc/eve/forums/a/tpc/f/4026073384/m/7941002062
ghostrider666
Marvel Masterpieces 2007 (Upper Deck)
Opened my 1st box.
I know a lot of people are going to HATE the amount of parallel cards in this set. There are 2. Even the sub sets have parallels!
Overall Im pleased with the overall quality of the cards, & the artwork used for the set. Its very consistent with the quality over the run of the series from 92-96.

I was unable to complete any of the subsets from my box, but did get doubles! The same goes for the 3-card chase sets. Again, I got a double of the 1 Ross card. 2 of the Adams, & 1 Struzan.

My sketch card is of Giant Man by Quiles. Though only black&white, IMO its nicer than many of the colored sketch cards weve seen recently. Same goes for other sketches Ive seen from this set.

Overall, Im happy with the cards. Did they live up to my expectations? No. But, being a hard-core Marvel zombie, I dont know if anything could have.
I really dont like the breakdown of the cards by not getting a complete subset. You could have by the numbers.

Oh, and theres a 1 per pack game piece card. You have to register the card pieces on UD. I think for the original Ross artwork prize.

If you have time it would be cool to see a scan of your sketch -- from the sketches I've seen so far it seems like the overall quality is pretty decent.

Jon
Bryan Shaffer
I think people are going to love this set. Fist off it is a 90 card base set...not 80

I opened up three boxes and am in love with this product. The base set is beautiful and the level A foils are very very nice. There are three versions of the 90 card base set. The normal, a "fleer foil" set, and then a gold bordered set. The fleer foil fall at 30 per box, and the gold border at 6 per box. There is also an X-Men and Spiderman 9 card subset, and each of those ALSO has a 9 card foil set to match the normal cards. Out of my three boxes, I was able to put together a COMPLETE 90 card fleer foil set (I know that is amazing luck...90 foils pulled, and not a single double or missing card...I was thrilled!) didn't get a single double on the gold border set, and was able to complete my X-Men Subset, and foil subset. My spiderman set is missing 1 of the 9, and the foil subset is missing 3. I was also able to put together each of the three insert sets featuring Ross, Adams, and Struzan. My sketches weren't the greatest in the world, but they were still really nice to look at (I am not trying to knock an artist or anything, it's just coming off DC Legacy at a cheaper box price with a colored sketch in every box it is hard to accept pencil and ink at a higher price point). I would have liked some color but I will live. Honestly though, the set itself is so beautiful that the sketches were put aside for me, this is the first set EVER that I am planning on making a mini master of. I just love it. I don't think anything at all will be terribly hard to finish except MAYBE the gold bordered set. I think people are going to REALLY enjoy this set. It really does feel like a continuation of all those early-mid 90's comic sets I used to go buy packs of at my local Wal Greens when I was a kid. Also, I was able to make a full set out of every box, with plenty of extras left over.

Peter cloet
great sketches,
I know we are spoiled with all the colour sketches but I really like your sketches.
Most of the sketches I have are pencil or inked, not that much of coloured ones.

igman7
All 3 of the sketches are very solid renditions of very popular charachters. With as many oddball charachters and art student sketch artists as there are for this set, I think you did quite well Bryan.

Bryan Shaffer
Oh yeah, I know I did...like I said I wasn't trying to come off like I didn't like them or that i was putting down an artist or anything, just spoiled by Complete Avengers and DC Legacy is all.

Darth Vader Fan
I really like your Bullseye sketch Bryan

alfster
Got my two boxes yesterday. I'm glad I didn't get any duplicates of the base foil cards.

Artist Shasteen. Is this Orka?

quote:
Originally posted by alfster:
Got my two boxes yesterday. I'm glad I didn't get any duplicates of the base foil cards.

Artist Shasteen. Is this Orka?

Yep. Look at top left under the Marvel Masterpieces logo.
chad
I open a case and I was very happy with the base cards and the inserts. The sketches where good and some not so good. I guess after being spoiled with DC Legacy & Complete Avengers over all the sketches are good. 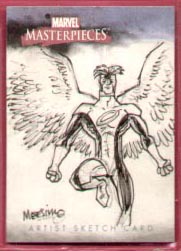 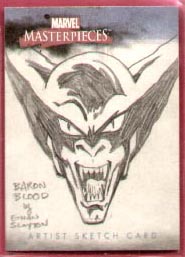 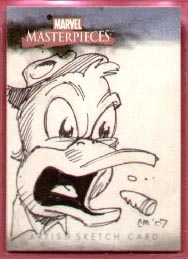 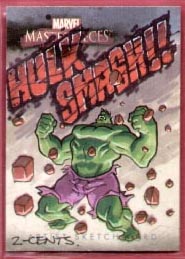 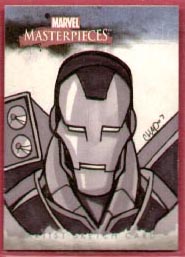 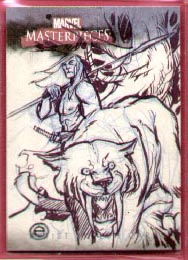 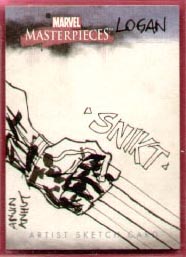 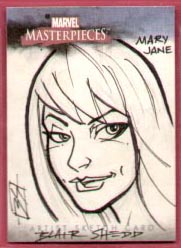 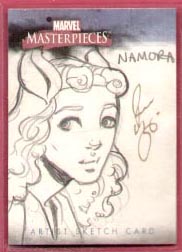 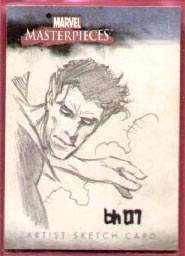 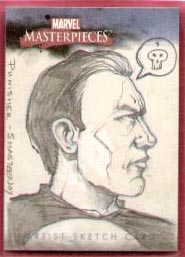 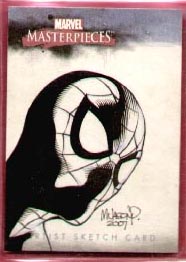 Bryan Shaffer
Oh yeah? Try this one out then.

FyBy
I wonder who else from obscurity has a card. To bad they couldn't get Sergio for some Groo sketches. Although technically never a Marvel book.

Peter cloet
it's maybe not the most famous marvel stuff but I like Howard the Duck, it's a very nice sketch.

Raj
And there is a Howard The Duck comic mini-series coming out at the moment.
clearblue
these sketches are a lot better than the ones that have been on ebay.. i hope my case is just as nice as urs chad..
Incarnadine

quote:
Originally posted by FyBy:
I wonder who else from obscurity has a card. To bad they couldn't get Sergio for some Groo sketches. Although technically never a Marvel book.

How's this for obscure?

quote:
Originally posted by FyBy:
I wonder who else from obscurity has a card. To bad they couldn't get Sergio for some Groo sketches. Although technically never a Marvel book.

How's this for obscure?

I have been watching that one. I think it may be by Colleen Doran, the irony of being obscure, but not positive. I am hoping to find a reference on the cards she did for the set so I can start looking for them.

Like Bryan, I was also able to complete the Fleer Foil parallel set out of my 3 boxes. I guess they collate the foils exactly the same, in batches of 3. I also got all unique gold foils.

I also managed to get all three box toppers, and all three insert sets featuring Adams, Ross and Struzan.

Of the Spider-Man and X-Men subsets, I'm missing one Spider-Man S7 only. In terms of the foil versions, I barely pulled any of the Spider-Man foil subset cards. I only received 3 of them. I didn't get all of the X-Men foils either. I'm missing X5 and X7. That was the only disappointing part out of the 3 boxes. I got a case coming, so I'm sure I'll be able to finish those off eventually.

I think I will actually post up a trade list for this stuff. I'll try to go for a full gold foil set. I think I'll be close when I'm all done opening.This message has been edited. Last edited by: clearblue,
RAMolinelli

quote:
Originally posted by alfster:
Got my two boxes yesterday. I'm glad I didn't get any duplicates of the base foil cards.

This is the only Ironman I did for this set I believe!