I love the colors in this next sketch card. I just wish I knew who it was.

This message has been edited. Last edited by: hollypop,

The second one might by Jubilee?This message has been edited. Last edited by: Redemption,

I was thinking that it might be Jubilee, also, because of the sploches of color around her and her youthful appearance.

I'm glad you thought the same thing- makes it more valid then just a mere guess on my part.

Jaguar69
yes that has to be jubilee!!
opened one box yesterday, pulled this nice looking Scarlet Witch by Ricardo Rattan. I think he did 150.
May be up for trade if anyone is a scarlet witch fanatic! This in my opinion is one of the best looking sets iv seen in years, not just coz of the ladies! but the look of the matt finish, it gives them real sharpness and vividness (is that a word!?) anyway hopefully gonna be getting a few more boxes if i can find them!

raider5gt
Finally i broke into my last box

I think its Jean Grey?? by Eddie Wagner with smiley face in the 0 of o8

tangent
Yayy, my boxes arrived. I got 12 loose boxes rather than a sealed case so I will need to trade to balance the chase sets. Collation generally was not up to Rittenhouse standards (several boxes did not have complete base sets and one was missing the sketch). On the other hand, the set itself is stunning, base and chase are all excellent.

Sketches are (with best guess and helpful suggestions on characters): 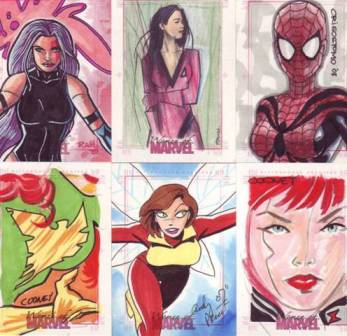 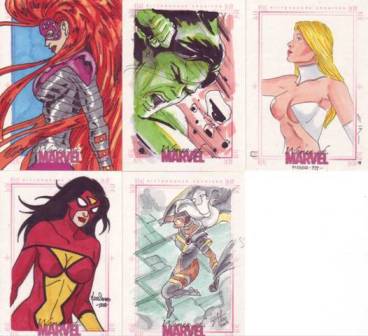 I love the impact of the Goodmanson and the layout of the Ratton Storm. Lots of nice sketches here to complement the beautiful artwork of the printed cards.This message has been edited. Last edited by: tangent,
KADRAN00157
Wow Jen

Great Sketches.....
Loves the Miller one

KADRAN00157
Incarnadine
A box I purchased from Ztaylork arrived safeley today. The sketch is a very nice Domino by Cezar Razek.

Likes the one on the bottom right hand corner

Incarnadine
I hit my local shop today when I went to see Iron Man and picked up a couple of boxes,

My sketches were a Mowhawk Storm by Cooney and a Blink by Dos Santos.

Hyperion
My four boxes arrived some time ago, but scanned them now for your viewing pleasure

I am quite happy with the sketches

hollypop
I am in love with this set!!

The sketch cards are so beautifully done and the base set is perfect.

hollypop
Hyperion... I forgot to mention that I love the bottom sketch card. If I'm reading it right.. it's done by Campos?

It's so cool when the artist uses the entire card- 'full bleed' sketch cards, the only way to go.

Hyperion
Yes Hollypop, its a Campos- sketch, and yes: I really like it as well

And Batman: I also like the enchantress, its fun with all the different styles !