Anyway, I have now almost finished breaking and collating both cases. The six major hits from the first case were:

And from my second case:

Not too bad really...

As a final note, this is a breakdown of the autos and chase cards I pulled from the two cases.

I was able to make the complete Lenticular set from the two cases but only found S1, S3, S4 and S6 from the Sauron Set. I have yet to combine/collate the foil parallel base set.
Don Norton
I received my box today, thank you Ed!

Base cards look nice, there should be a complete set of 72 cards in each box, the fact I was missing 3 cards is inexcusable, especially considering there were 40 extra base cards, with doubles of some of them.

Inserts are mostly nice, the poster and Biography cards are beautiful, the clear Laketown and Beard cards not so much. The Laketown cards could have been printed on some kind of opaque stock and looked really nice. I don't see how the clear Beard cards are a good idea.
My autograph is Andy Serkis, as Second Unit Director. I think it would have benefited from a photo of him.
In today's market, I think a full base set should be guaranteed, also, Cryptozoic raised the price of their product, but there is only one hit per box, while most competitors provide 2 or 3 hits per box.
Hope everyone does better than I did with these, maybe my box was just a fluke.
steviek2
Here are the results of my one case of The Hobbit: The Desolation of Smaug...

igman7
I busted 2 boxes tonight, nothing over the moon to report, just the expected inserts plus the following autographs

It is a good thing I stopped at Walmart for WWE Chrome to balance out my luck.

Not too bad with 2 autos (1:24) cards and 1 Smaug (1:96) card.
Kevin F
After spending 10 days in Customs lock-up, my final two Hobbit cases arrived yesterday and I have to say they were worth the wait

Across the two cases, I only picked up two new standard autographs. Fortunately, that included a Martin Freeman auto in both cases so that was fine. Anyway, I wont waste any more time on the standard stuff as I know everyone will want to see the case hits.

First case was very much like one of my other cases with three sketches, two poster autos and a printing plate. Two of the sketch artists were also the same as from one of my previous cases. But, I also found a nice little bonus in the form of an Arkenstone 1/1 of Card # 29

Now my second case was a bit different. While it was undeniably loaded, it was also a little short on case hits compared with the other three. Only three sketches and a single poster auto. Then again, considering the pulls I did get I can't really complain too loudly

I've included a scan of one of the autos I pulled, as it is a little scarce as far as I can tell. It's the only inscribed auto variant I've seen from Mary Nesbitt. Perhaps others may know different. But it is a nice quote from the film.

1) Stephen Ure as Finbul the Hunter

2) Adam Brown as Ori the Dwarf

3) Sylvester McCoy as Radagast the Brown

5) Ken Stott as Balin the Dwarf

Then I pulled these 2 Surprises

Then wait for it I got

Not bad from a 6 box break

12 standard autographs, best of which was Lee Pace, two poster autographs of Mark Hadlow and James Nesbitt, and these three sketches : 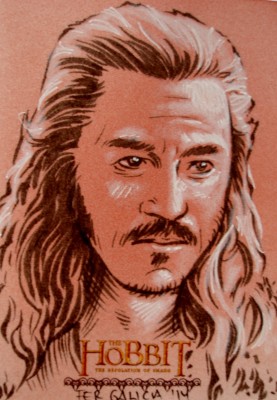 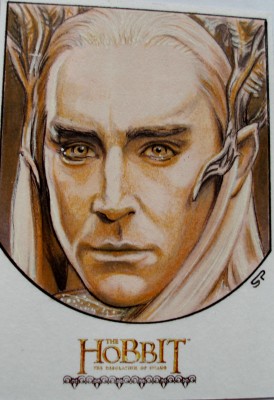 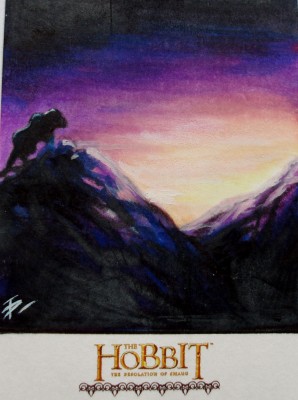 quote:
Originally posted by xtime:
Enjoyed the movie, so thought I try a cheap Hobby box...

I would be VERY happy with the Auto - nice pull