Non-Sport Update's Card Talk
Doctor Who (Topps, 2015)
This topic can be found at:
http://nonsportupdate.infopop.cc/eve/forums/a/tpc/f/4026073384/m/4647025976
Kevin F
Doctor Who (Topps, 2015)
My two cases from this set finally arrived on Wednesday. I finally finished collating everything this evening, so I thought I'd post the results here with a few comments.

D-3 Who Is The Doctor – The Third Doctor (Yellow)

Eric Roberts as The Master (Gold 1/1)

Collation was overall pretty good but I was only able to make 8 complete Base Sets from the two cases. I had to open 7 boxes in the first case before I was able to complete my first Base Set, which did not bode well. However, the intriguing, and slightly frustrating, aspect of that is that all four incomplete sets are missing the same card. in three of those cases, this is the only card needed to complete the set. The fourth set is missing two other cards.

My only disappointment was not hitting an autograph from one of the actors playing the Doctor. However, this is offset by hitting autos from the two actors who played the Master who contributed to the set. Getting a Gold 1/1 for Eric Roberts was the icing on the cake there :-)
Deena
Here's the breakdown for my second case:


Who is the Doctor


I have lots of extras and lots of needs. I'll post them in the trade area. If interested in a trade, email me.
dcole
IANTO!! Sweet, Deena, congrats on that one!

quote:
Originally posted by dcole:
IANTO!! Sweet, Deena, congrats on that one!

Thanks, Debi! I was happy about that one. Now I need that Barrowman one to complete the Torchwood subset (the trio auto is way out of my price range; but, hopefully, I'll find a good trade or a reasonably price John B auto in the near future).
piperh33

quote:
Originally posted by Deena:
My first case finally came (another one coming hopefully soon...Wolfie -- I'll be in touch once I break down the 2nd case).

You're so lucky ! (I LOVE him ! I dream of having an autocard from David.

quote:
Originally posted by Deena:
My first case finally came (another one coming hopefully soon...Wolfie -- I'll be in touch once I break down the 2nd case).

You're so lucky ! (I LOVE him ! I dream of having an autocard from David.

Thanks so much, Sandra! Yes, I was lucky to pull a numbered auto from David. And, I did need one of those Bernard Cribbins.

Thanks again for the congratulations!
Spencer Quist
Bit rum getting two of the same autograph in the same case if you ask me. Surely there's enough around for some variance?

quote:
Originally posted by Spencer Quist:
Bit rum getting two of the same autograph in the same case if you ask me. Surely there's enough around for some variance?

Yes, I was happy about the first Bernard Cribbins auto; but, when I got three in two cases, I was disappointed since I need so many others.

If anybody wants to trade, my trade list is up to date.

Thanks!!
barobehere
Picked up a second box to inch me closer on the base set.
I got almost all new base cards now I am only missing 5 base cards.
Tardis variant 41 River Song.
My cards are at home but got all the stated Companions, Christmas, Moments, Gadgets, who is the Doctor and parallel cards.
11th Doctor Tardis Patch card and
Deborah Wathing autograph card.
Very pleased.
hammer
Finally got to open my other 2 boxes

Disappointing that the 2 boxes duplicated each other so much - would have preferred another auto rather than printing plate. Won't be buying boxes of the new set!
hammer
Got a final box as a present from a Good friend! Cheers

Still no full base set in 4 boxes
piperh33
My box was incredible ! (for a simple buyer like me.

and, my biggest surprise : 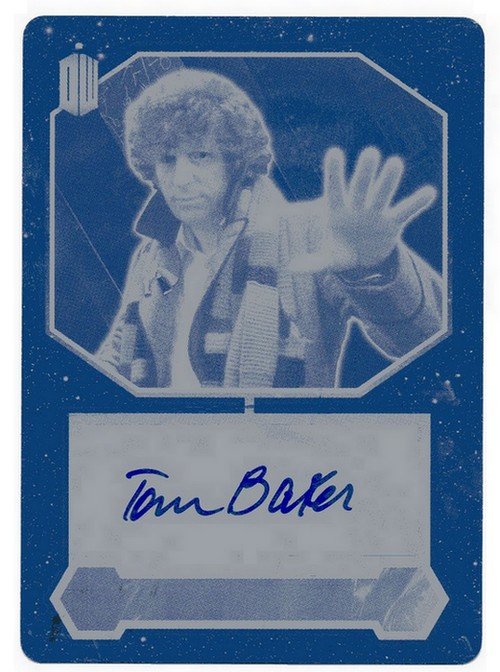 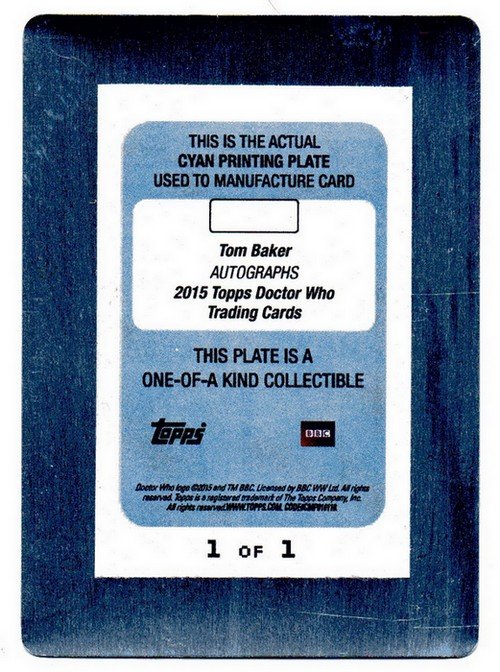 for a minute ! I had never seen a plate in real, not even touched ! And, here is one, and beautiful.

I think I can say that it was a good box.

Raven
Congratulations, always great to hear somebody pulled a big 1/1. It's the allure of the sealed box that keeps us coming back against our better judgement.

But when it works out, its better than finding money. Enjoy!

cardaddict
Even I, who never watch DOCTOR WHO, recognize that guy!