considering up until a week before release it was going to be one sketch per box.

Base set collation was spot on but I only made up 4 of the chase set needing F1 to make up 5th and 6th sets.

The Christopher Lee auto was at the front of one of the boxes in an envelope rather than pack inserted. I got five each of the Roy Boyd and Lindsay Kemp autos and two Britt Ekland autos, one auto per box.

I also found three printing plates as well as the five sketches below. 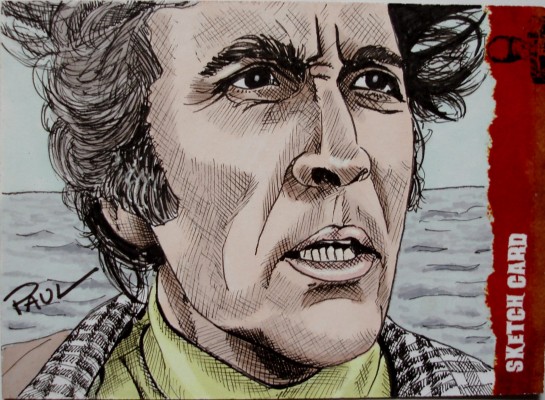 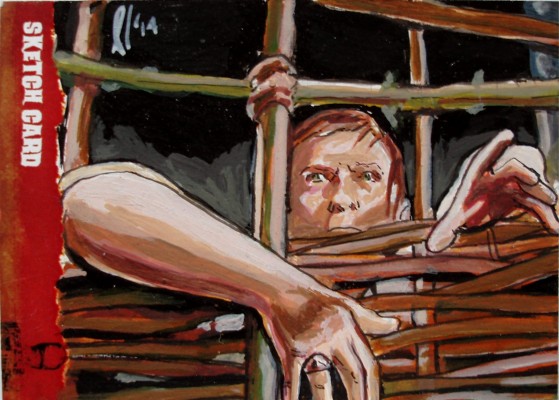 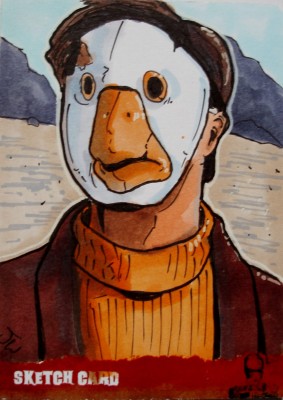 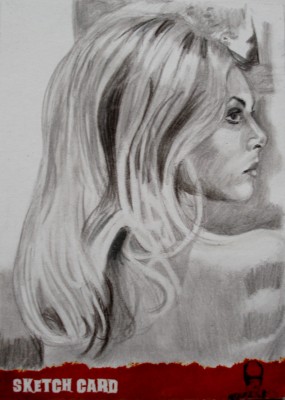 . Don't like to be negative as I know Jason and Barrie put a lot of effort into the cards, hopefully The Man Who Fell to Earth will be as pre-advertised.This message has been edited. Last edited by: H_Toser,
Raven
I really like all 5 of those sketches, just on a general basis from what I saw, they are better than Women of Avengers. The two Ekland autographs and 3 printing plates are also nice and getting the set going at all is an accomplishment. The Lee autograph is of course the incentive for a case. Could you scan the autograph cards please?

Having said all that, getting only two signers combined on the other ten autographs is very poor and should not have happened.

vampy
doe`s the lee auto come in the packets or was it dealer only ?
with each case
Raj

quote:
Originally posted by vampy:
doe`s the lee auto come in the packets or was it dealer only ?
with each case

Sounds like it was in the sealed box but, instead of being in a pack, it was in an envelop on its own.
Triple-Frog
The Christopher Lee auto was inside the sealed box at the front of one of the rows of packs inside a small white envelope.
wolfie
could you tell it was there without opening the box?

quote:
Originally posted by wolfie:
could you tell it was there without opening the box?

No, it's only a thin small envelope. I would be more concerned about damage if the front of the box took a bash.
vampy
some one must be very lucky ??? they have on ebay a 1 of 5 Christopher lee signed print plate and a brit ekland signed print plate ??? very lucky
hammer
Some dealers got 5+ cases of the stuff so it could be one of them
wolfie
I am totally confused about the binders.

What do they contain or not contain and why is ebay full of what should have been in them or exclusive to them.

Triple-Frog
As I understand it there were 199 binders made. The first 100 sold had an exclusive promo card which was marked on the front /100. Anyone who ordered via the website also got a film cell card.
JOHN LEVITT
I bought two boxes and an album.

49/54 cards for a second set of the base cards.
1 duplicate Gold Foil card.

The Gold foil cards were all in one packet.

Again the Gold foil cards were all in one pack.

Not having seen a checklist I don't know what I missed other than not getting a sketch, a Britt Ekland auto and a printing plate as per Triple-frog's post.

Regardless I am quite happy with the result.

I placed my order only on 17th November.

monkeyafterdark
I've long looked forward to this release and got 7 boxes. All sequentially numbered. So far I've only opened 5 of them. I'm trying to keep 2 sealed until the weekend...

So far I've two complete gold foil sets. I love the soft sepia tone Unstoppable added to the black and white pictures as it really fits with the gold title-ribbon on the card. This could've just as easily worked as a parallel card set.

Looking forward to what the two remaining boxes will deliver this weekend.
Bacall1

quote:
Originally posted by Bacall1:
I opened box 0011 and pulled Roy Boyd auto and Roy Boyd autograph. I got 2 of the same autograph and I didn't even get the gold foil pack. I checked twice to make sure I didn't miss them. I was hoping the low numbered box would bring me good luck. Guess not. Oh well. Win some lose most. I did get a lot of nice promo cards from Barrie in my package that took some of the bad feelings I had from opening my less than stellar box. Thanks Barrie!

chesspieceface
Here's mine, 3 boxes worth. There's a duplicate autograph not pictured.

Cool color sketch, painted for sure, but I don't know the artist. The film cards are everything I hoped for, just beautifully designed. The images in two of them are pretty similar, but that's how film strips are, a lot of similar images, luck of the draw, I'm sure. These thicker film cards are sometimes not cut cleanly (Nightmare Before Christmas from NECA being the main culprit), but these are clean as a whistle, sharp as the wit of Oscar Wilde.

No Ekland or Lee autograph, but with only 3 boxes, that's well within the odds on those, so no problem. Happy to get the plate.

The Gold Foil cards are handsome. I ordinarily would prefer these to be scattered through the box and not in one pack like they are, but in this case, the vast majority of the boxes will be opened as full boxes, not too many single pack sales will be made with such a limited run, I think. You seem to get a full pack of 5 golds unless the box has a second hit beside the autograph in which case that hit would take the place of one of the gold cards.

I missed #3 (Ekland, bummer) to make the first 9 card Gold set and need 4 cards for a second, so not too shabby.
Here they are, plus the puzzle on the back:

Each box had 2 base sets, and only 6 extra base cards, so three boxes means 6 sets and only 18 leftover cards, A+ collation, pretty much as good as it gets.

The binder is gorgeous, maybe a little thick for a 63 base and gold (+hits) card set, but I'll use the extra room in there for sets from a few other cult movies I'd been keeping in a generic binder. They'll all go nicely together.

I'm not sure where "Wicker Man" is on my (giant) list of all-time favorite films, but it's on there, for sure. And if I'd been asked to guess which movie from that list was at last getting a card set, it would've been a LONG time before I guessed Wicker Man. Good stuff, glad Unstoppable got it done, and with new signatures from the two biggest stars (happily!) remaining, and cut signatures from the others.

Thanks to Barrie for the fast (and free!) shipping to the United States and for the bonus items (including the "Wicker Man" preview set with a few images not in the regular set, I think), all of which is greatly appreciated. Looking forward now to the "Man Who Fell to Earth" set.This message has been edited. Last edited by: chesspieceface,

quote:
Originally posted by Triple-Frog:
As I understand it there were 199 binders made. The first 100 sold had an exclusive promo card which was marked on the front /100. Anyone who ordered via the website also got a film cell card.

Sketch card of what appears to be Christopher Lee; can't make out the artist's name, but last name appears to begin with P, and looks to be numbered out of 14
Kevin F

Sketch card of what appears to be Christopher Lee; can't make out the artist's name, but last name appears to begin with P, and looks to be numbered out of 14

If you post a scan of the sketch and auto I'm sure someone can help with identifying the artist. Also, it's likely the 14 is just a reference to this year, i.e. 2014, rather than the number of cards the artist drew.
Tommy C
Well, Barrie said under the News section that most artists are only doing 20 sketches, so maybe David's sketch is truly limited to 14
jaseb
I would imagine the sketch is by Jay Pangan III. He puts the III over the year - in this case 14. He did 35 sketches for the set and from what I have seen they are all pencil sketches either fully monochrome or with an orange pencil background.