This message has been edited. Last edited by: samjoey,
tangent
What a way to start - that is a fabulous sketch.

Is the squiggle near bottom left a signature or part of the drawing? If a signature, can yoy do a larger scan of that part?

Katie Cook
i'd guess it's a goodmanson :-) great card!

Ariana
Soooo...my parents, on their random travels, found a card and collectables shop with a bunch of random sealed boxes. One of them was a box of Lord of the Rings Masterpieces...a hobby box! They bought it for me (yay!) for $80, and gave it to me when I went up to Massachusetts to visit them.

I was super excited to begin with, but when I opened pack #5 and pulled a Katie Cook sketch, that was the best feeling ever. Here are pics of my two sketch pulls:

Nothing worth millions, but I'm absolutely in love with my tavern kitty. I also got two complete base sets, and the collation of the foil and etched foil sets were perfect...a full set of each. I don't know if that's unusual or not, since I've never been lucky enough to get a box of this before. But it was still exciting. I even scored a Legolas bronze foil.

One day I hope to have a Katie Cook sketch....one day.
Batman
Awesome Katie Cook, Ariana!!

I've never had the opportunity to pull one of her sketches (never bought Star Wars because of the rare odds of even getting a sketch from one box, or DC Legacy because I'm not too into comics), but she's by far and away my favorite artist. Despite the fact I pretty much only go for her color sketches, this one is never leaving my collection. Ever. lol.

rectz
i was lucky to find a box.. ive always like sketches.. and i was glad i bought this box...
these are my second and third sketches EVER..
my first was from heroes by lord mesa of claire.


my first sketch i loved..


my second sketch was incredible..


thank you for looking..

cardinalfan13
opened a box today got a full base set full sets of both foils. and these two sketches

hitdog44
Here are the 'highlight sketches' (including one of our best pulls ever!) from our latest 8-box hobby case split:

tangent
Great pulls. You got quite a few excellent Frodos in that case! 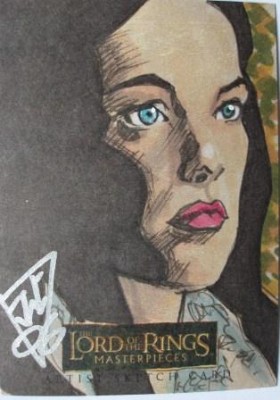 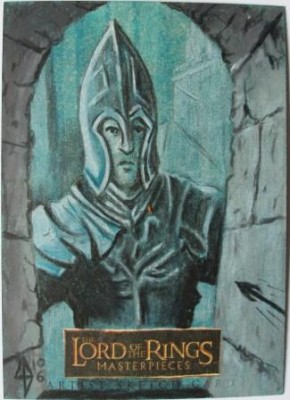 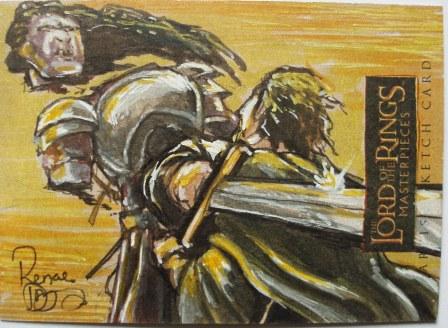 Raven
[QUOTE]Originally posted by HIM:
Had some LCS credit and couldnt really decide what I wanted so I broke down and got a box-
/QUOTE]

Very nice, especially the Rabbitte. I wish I could find these boxes again. I don't usually buy sketch card product, but a lot of the artwork in LOTR Masterpieces was really outstanding. I busted quite a few boxes when it came out and got some of my favorite sketches. The downside was pulling one of the W/W boys "efforts", those were just awful.
HIM

quote:
Originally posted by Raven:
Very nice, especially the Rabbitte. I wish I could find these boxes again. I don't usually buy sketch card product, but a lot of the artwork in LOTR Masterpieces was really outstanding. I busted quite a few boxes when it came out and got some of my favorite sketches. The downside was pulling one of the W/W boys "efforts", those were just awful.

Believe it or not that box had been sitting there for a few years and I had been eyeballing it for 1 or 2 and held off for that very reason. Too bad its so far gone that I cant get decent price comparison to know what values to put on them for trade purposes.

lotr-mattt
This set is so far gone that it's a challenge to know if people even still have the old cards in their collections, but if anyone does and is looking to trade or sell, post up here.

My full collection can be seen here if looking for trade bait (it doesnt anchor perfectly, tab down until you see the Ahmed posts for the Alphabetical starting point)