Captain America was all I could think of - do you know the name of the other character?

US Agent (I googled Captain America lookalike). I am not really a Marvel person, but I think Cap is blue uniform and US Agent is grey.

Also, the star is on the left side of his chest, rather than in the center where it is on Captain America's costume.

quote:
Originally posted by Jake:
If anyone knows who drew the Original Iron Man card, & who MJT is (I think it's Mark J. Tannacore but it's not how he signs his other cards) I'd appreciate any and all help.


Can't help with the Iron Man but MJT is definitely Mark J. Tannacore. That's one of the sketches he's posted over on the Scoundrel forums.

http://scoundrelpublishing.com...iewtopic.php?t=27074
cardaddict
Judging from these pictures and what I've seen on Ebay, this set has some really outstanding sketch cards.
igman7
Here are the results of my SUPRISE case...

Unknown by Alex Magno and Human Torch? by Mary Bellamy

Daredevil by Riamundo Nonato and Yellow Claw by Mike Rooth

Human Torch by Lui Antonio and Daredevil by Adam Cleveland

X-Man by Kevin West and Colossus by Michael Sta. Maria

Ms. Marvel by Yesim Asrar and Majik by Jayson KretzerThis message has been edited. Last edited by: igman7,

cardaddict
I want that Ms Marvel card. Just send it to me -no arguments.

Haha, just kidding, you can argue all you want as long as you send it to me.
Miss Lizzy
I haven't sorted out the inserts yet, but here are the sketches from my third case: 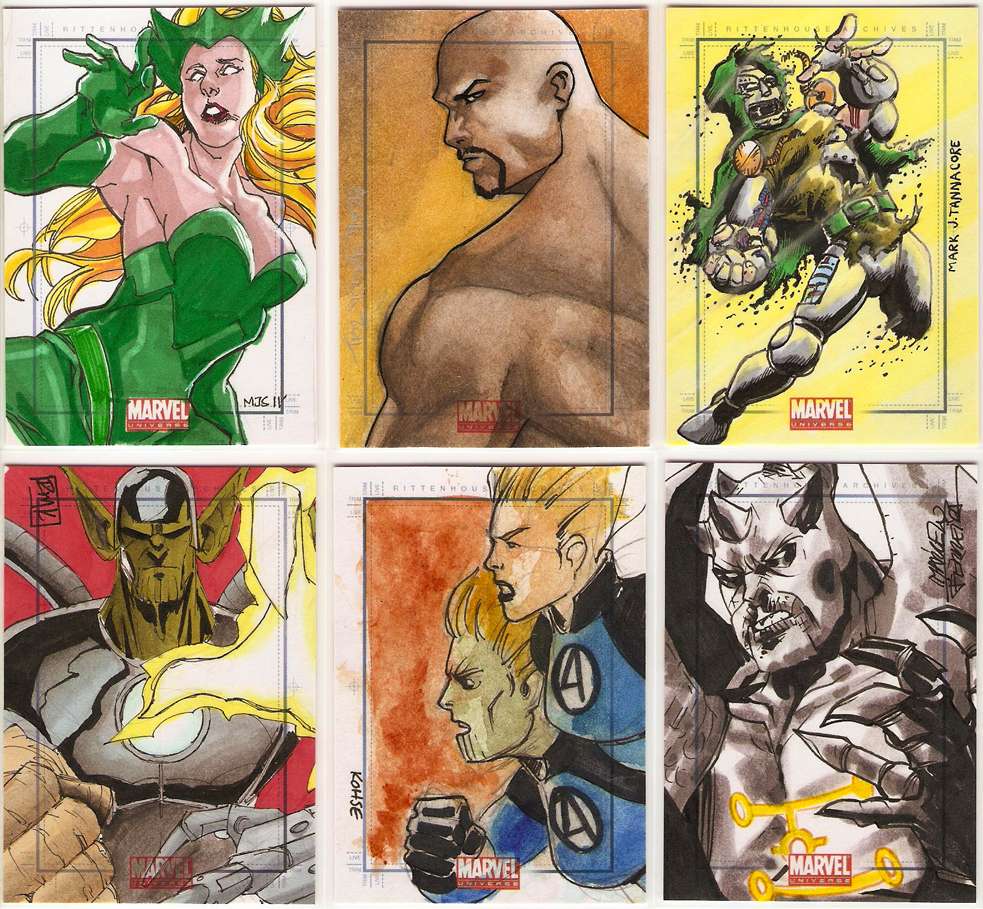 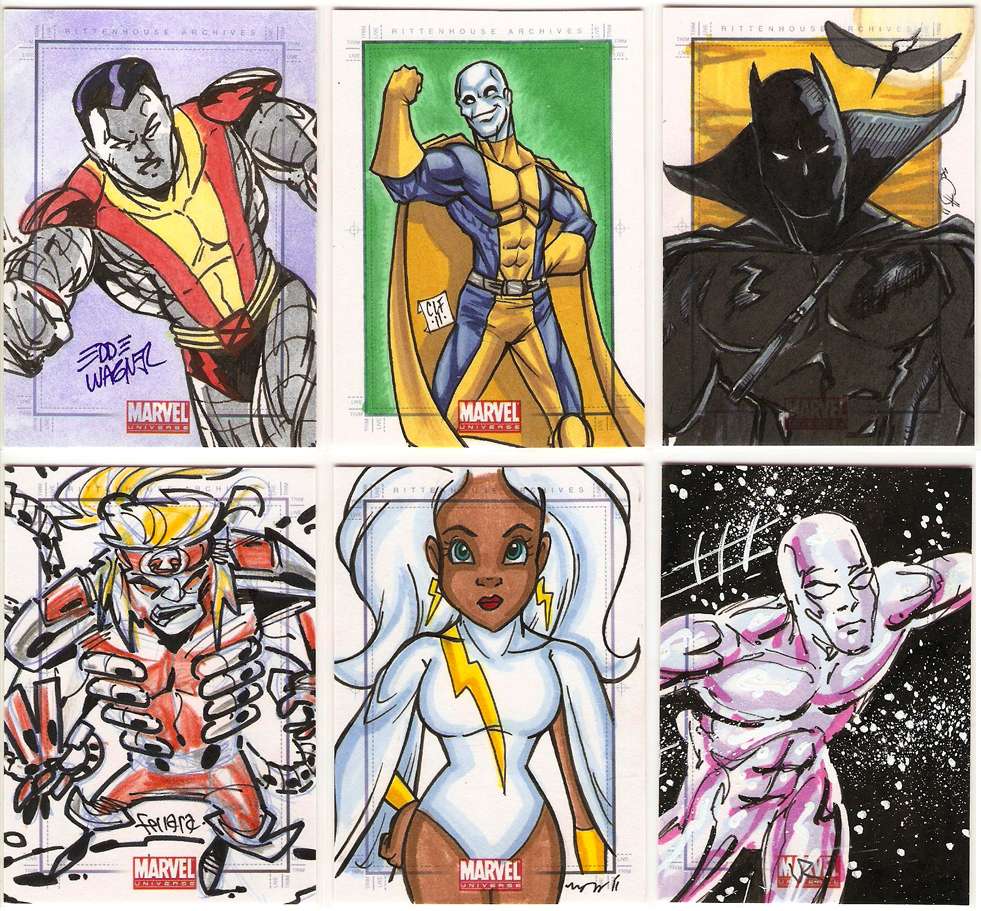 This message has been edited. Last edited by: Miss Lizzy,

Miss Lizzy
Thanks much

Miss Lizzy
Decided to open the remaining 10 boxes I had left for sale.
Once again, I need a little help with a few of the characters. 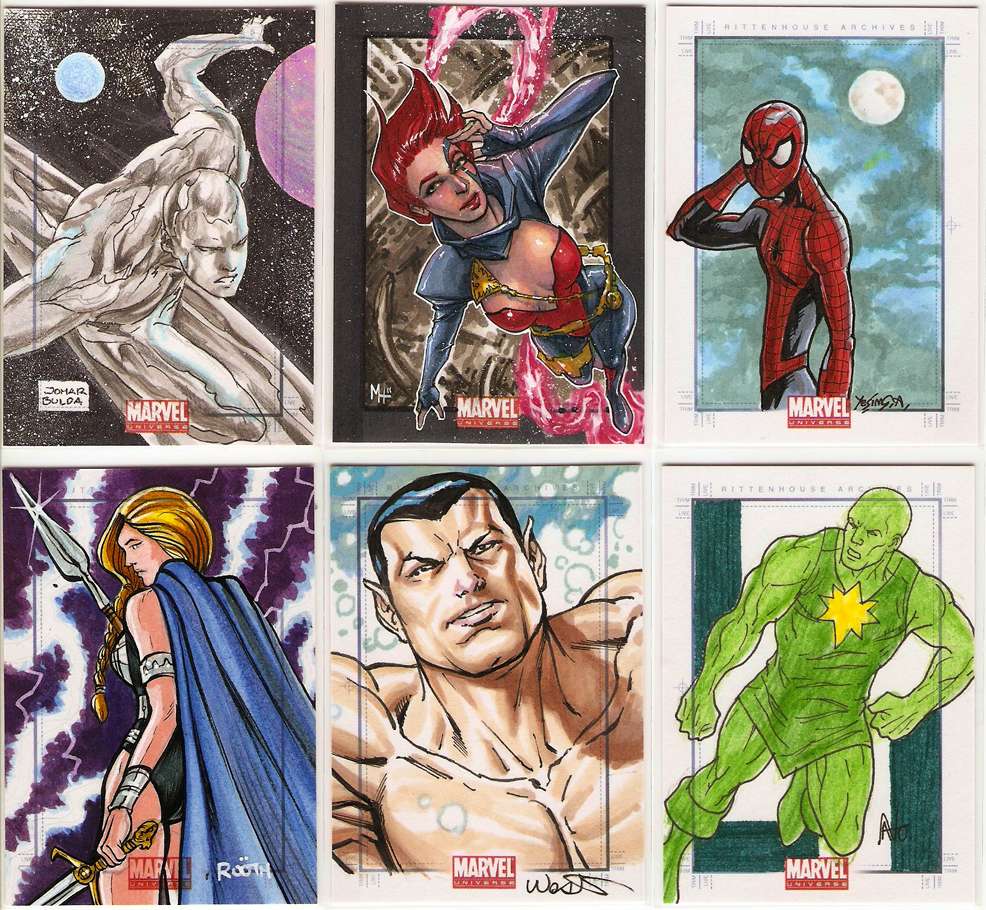 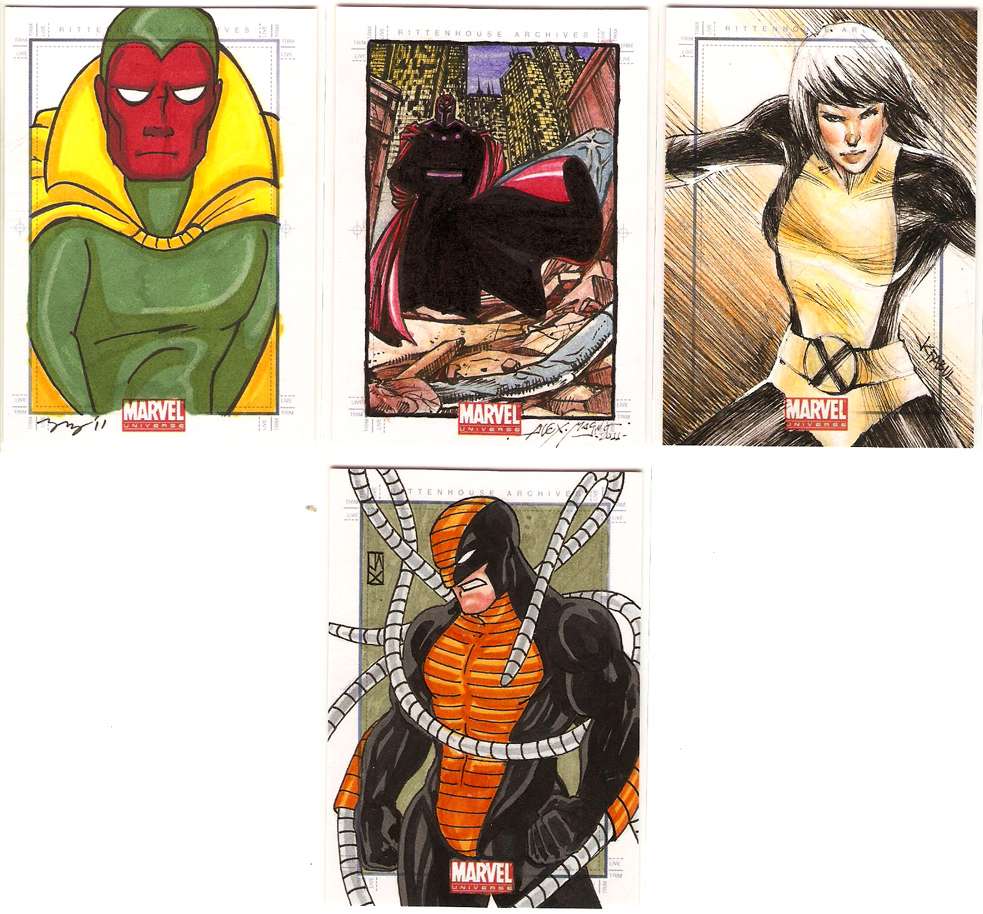 This message has been edited. Last edited by: Miss Lizzy,

Miss Lizzy
Awesome, thanks for the help

Monsterama2000
The Nonato is Radioactive Man.

cardaddict
My favorite is the Meghan Hetrick (AOA Jean Grey).

Monsterama2000
Got one box today. I really like the base cards. And I think clear cards are neat. But, I don't like that they are unnumbered paralells. The sketch card is Archangel by Renato Mapa Jr. (EL).

here are a few pulls from a case hadnt posted on this board:

QBall
Started back into the hobby again yesterday at Memorabilia with among others a box of these.

And a rather nice Red Hulk sketch card by JC Fabul

tangent
Finally made it to far off Australia. I actually picked up an archive box and a case. First the archive box: Now the case. The Hetrick panel is probably the nicest sketch I have ever pulled. And an amazing 4 card Meghan Hetrick panel of Gambit All in all, quite happy, although I would have liked at least one of the considered 'high end' artists just to ease the wallet a little.
hammer
Not a bad 2nd case though