If I could figure out how to post pictures here, I'll post picturesThis message has been edited. Last edited by: H_Toser,
Raven
Sorry for the misunderstanding, but it is 180 card base set. You were never going to complete it in one box.

The main thing is did you like the sketches? At least you got one of a main character.
Scorpiovamp
The sketch was ok.

I think I would have preferred if the got rid of the parrallel cards. Then you could have a base set.
Batman
I got a box today and got 3 autos and a patch

Don Norton
By now most of you have probably seen my NSU blog article on this set. I wound up beating the odds with 5 hits.
Well, my local shop also got a box of these and for the last few days I've been buying a few packs when I could. I think I bought 18 of the 20 packs. Once again, 5 hits.
I now have two autos Fredric Lehne and Edward Atterton, 2 patch cards, Wash and Mal, 2 artist autos, Tim Shay and Harold Edge, 2 sketches, Chris Henderson and Dan Gorman,and 2 Print plates.
Still need about 16 cards to complete a base set. Have a bunch of extras, so if any of you need some singles, let me know.
Graham
I was lucky enough to have been gifted 2 boxes. Here is the combined breakdown:

Not too bad although I would have cut down on some of the parallels to give me a full base set. No sketches or printing plates

Triple-Frog
Looking at the quality of some of the sketches I would say you were better off with the autos, especially as you got a dual and a crew member.
Curler
I bought one box of this. I pulled 3 autos and a patch and some parallels:

Overall, I like the set. It's a large base set, and I still need 58 cards to complete it. I only have 2 base card doubles out of the box.

I like the on-card autographs much better than the sticker autographs that Upper Deck usually does. That's a definite plus. I do wish that the single autograph cards featured a larger picture of the actor.
Triple-Frog
Bought a case of this now it has come down in price ( $460 which I thought was good value ) .

Made seven base sets of 171 cards from the twelve boxes, 27 cards short of a green parallel set and 40 leather parallels numbered to 99. 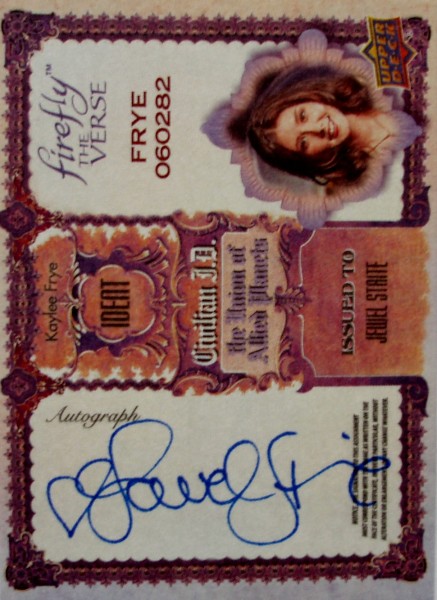 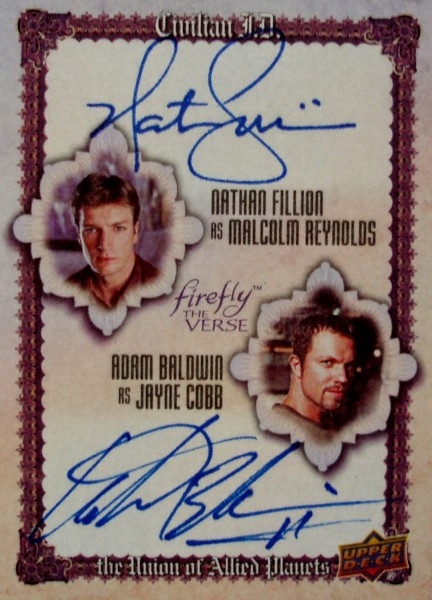 One black printing plate 1 of 1 for card number 85 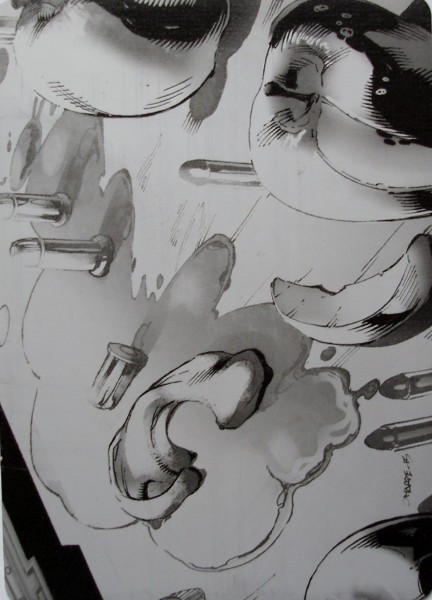 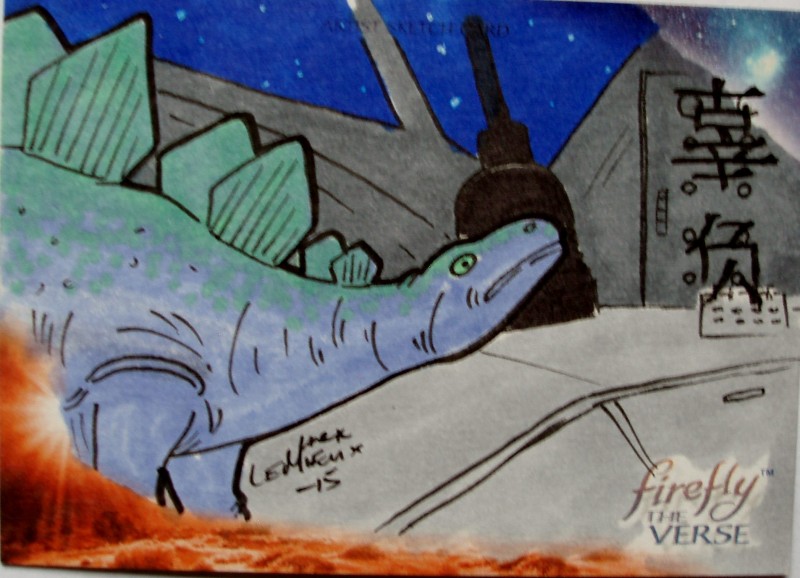 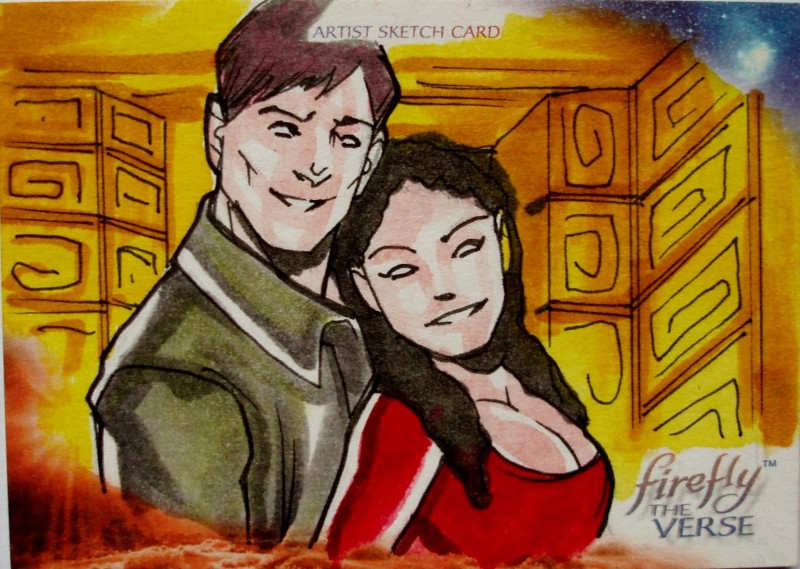 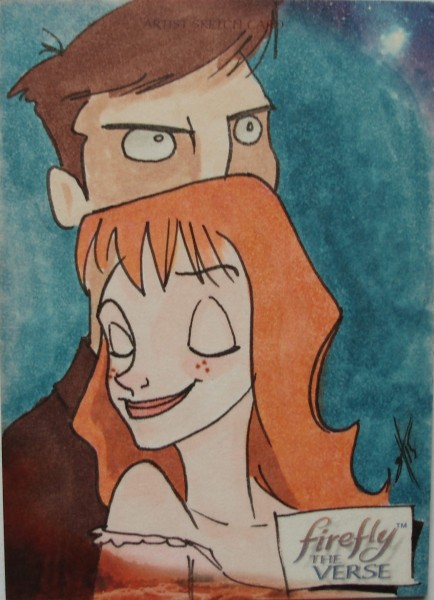 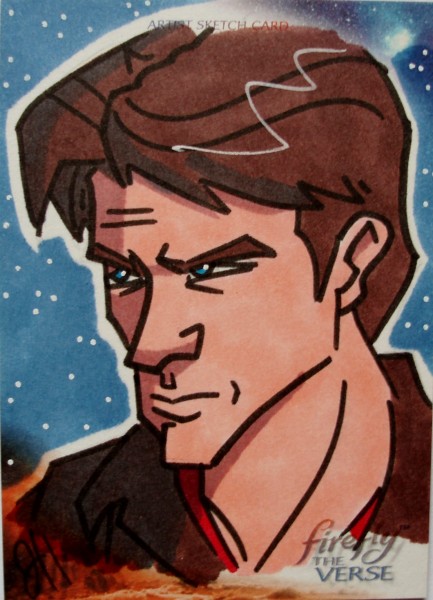 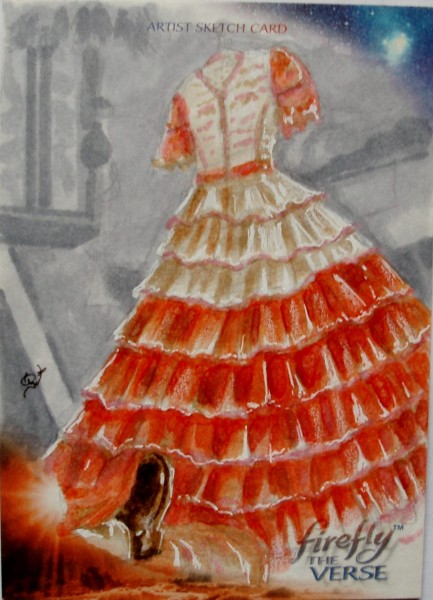 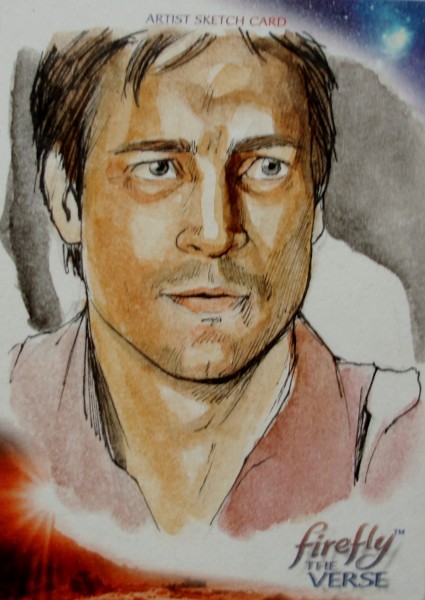 George Vega and ??? ( any help Appreciated ).
cardaddict
Love the autographs. Another set I have no chance whatsoever of doing.
Raven
For a set that was based on artwork, I thought a good majority of the sketches were well below average. I liked the autographs too, but this product was a big dud. Even at the discount, you have to pull a Fillion auto to get the value back.

I did like the last sketch.
Obi Wan Chrisobi
Twelve boxes to make seven base sets? That's horrible.