Non-Sport Update's Card Talk
Edwards Cinemas promos
This topic can be found at:
http://nonsportupdate.infopop.cc/eve/forums/a/tpc/f/274605453/m/8507081296
catskilleagle
Edwards Cinemas promos
Sometimes we run into a set that seems to be an isolated promotion, but later, we find out it was one of at least a few. This is the case with cards released as a co-promotion by Edwards Cinemas and Tabb Investments. Edwards Cinemas was a theater chain based in southern California with most of the theaters in that state. The company still exists today as a brand name within Regal Cinemas. Tabb promoted a series of collectibles shows in the early-mid 90's.

For years, many collectors were familiar with the 12-card set for the 1994 movie, "Mask" starring Jim Carrey. I don't know if you received one card with every ticket to that movie or if they were just given out in the lobby. Not living in a part of CA with an Edwards Cinema, I picked up a few of the cards maybe 20 years ago as part of a lot but still haven't completed the set. I really haven't been hunting that down but it doesn't appear to be an easy set to finish either. I've noticed only a few cards available over the years. Maybe other collectors have run into these more often. The cards shown below are #1, front and back, plus the front of #8.

In the early 2000's I saw a 6-card set of Edwards Cinemas cards promoting "The Flintstones" movie also from 1994. Since then, I received one of the cards in a lot but those are the only two times I've seen those cards. Card #3, front and back, is shown below. 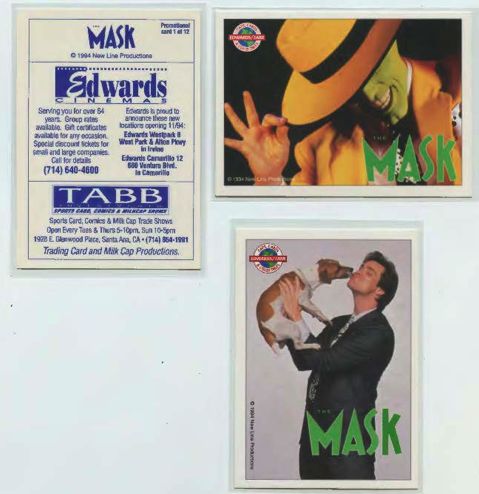 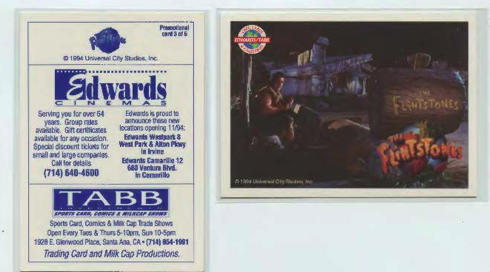 This message has been edited. Last edited by: catskilleagle,
chesspieceface
I went to an Edwards regularly in the 90's and for sure saw "The Mask" and maybe saw "The Flintstones" there. (Mighta been the drive-in for that one). I don't remember them ever giving out any cards. I would've definitely saved them. Those are probably pretty rare.

That theatre is still open, and is, in fact, a Regal budget (or second run) theatre. Good research, CE!

I was hoping you'd comment as I know you've lived the area for some time and might know more about them. If you didn't see them, it makes them even more of a mystery. Did you go to any of those Tabb-promoted shows? Maybe they were given away at those. The only other thing I could think of is that they were only given out opening day or the first few days.

It does appear the cards were not given out as sets as I have seen these mostly as singles or pairs (two of the same card - not two different cards at a time). I did see just that one Flintstones set and was able to describe it from some old notes for the PCE additions/corrections thread.

Yeah, I've talked about these cards with other collectors. The "Mask" cards seem to be the ones most often seen which makes sense since it might be the most popular movie represented by Edwards Cinema cards. I don't remember when I picked up the few of those that I have but it was back in the early-mid 2000's at least and it seemed like a couple of collectors had the set then. I have some other ones that were in an oddball lot. These cards are just another reason to take a close look for anything unfamiliar in promo card lot listings. Sometimes, sellers are unloading all or part of a personal collection and every collection is going to have mostly common things plus maybe a few rarities and local items.


quote:
Originally posted by chesspieceface:
I went to an Edwards regularly in the 90's and for sure saw "The Mask" and maybe saw "The Flintstones" there. (Mighta been the drive-in for that one). I don't remember them ever giving out any cards. I would've definitely saved them. Those are probably pretty rare.

That theatre is still open, and is, in fact, a Regal budget (or second run) theatre. Good research, CE! 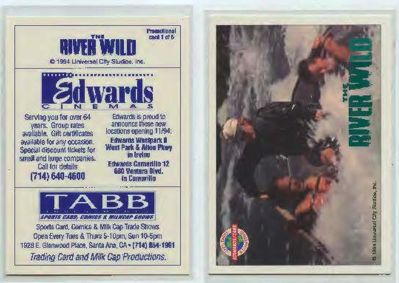 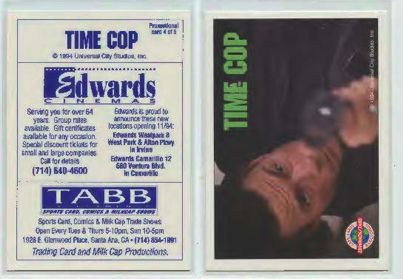 Jess
David R
There is also a Tabb Edwards promo set for the 1994 Little Rascals movie, which has been on ebay forever with no takers.

I have the Mask set.

However, in 20 years of searching I have never seen the Flintstones set. I do not have it.
Tommy C
I have also seen on ebay Tabb Edwards' milk caps for the 1994 Disney "Lion King" movie

pcetodd
Hey Cats, what is the logo in the corner on front?
catskilleagle
Hey Todd,

I forgot to get back to you on this...the logo says, "Edwards/Tabb" within the red bar and "Caps, Cards & Collectibles" in the white ring.

quote:
Originally posted by pcetodd:
Hey Cats, what is the logo in the corner on front?