Non-Sport Update's Card Talk
UNLISTED PROMOS PICTURE GUIDE
This topic can be found at:
http://nonsportupdate.infopop.cc/eve/forums/a/tpc/f/274605453/m/8267062236
catskilleagle
UNLISTED PROMOS PICTURE GUIDE
Here's a card that shows Denise McConnell, who was Miss March 1979 in Playboy magazine. Its design is similar to that of cards of various editions of the Playboy Centerfold Collection (Sports Time, various 90's publication years), but unlike her cards in the March Edition (1995), she is fully clothed on the front with just a head shot on the back. It's numbered "1" on the back, does not note the manufacturer there, and has a copyright "Denise McConnell, Inc. 1998." This card is said to have been given out as part of a promotion on Ebay in 1998. I haven't seen it for sale in a while. 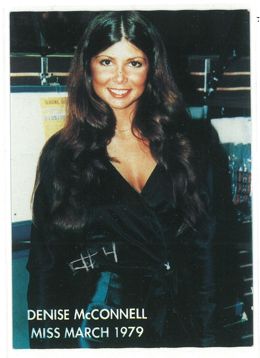 catskilleagle
This "puffy sticker" is part of a set of stickers that promotes Disney's Uncle Scrooge comic book series characters. This one features Flintheart Glomgold. It measures 1 7/8 x 3 1/8 inches with a 1988 date on the front but no text on the back (sticker back). These stickers are said to have been distributed in Sweden as part of a Kellogg's promotion - probably inserted in cereal boxes. I saw 3-4 other stickers in the set a few years ago but haven't seen any since. This one is still in its cello-pack. 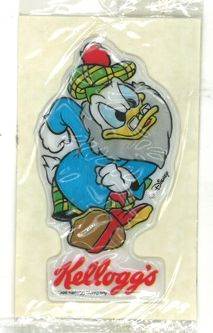 This message has been edited. Last edited by: catskilleagle,
catskilleagle
Here's a promo card for "Mickey's All-American Pin Festival," a two-month long event devoted to Disney pin collecting/trading at the Disneyland Resort in 2003. It measures 2 3/8 x 3 5/8 inches. The back has a website for getting official news on the Disney pin trading hobby. 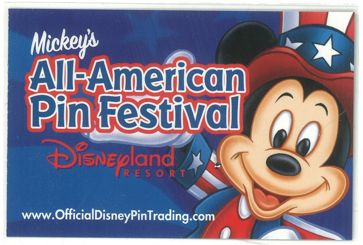 kyfhomp
Here's some additional info about the Muscle Cards with 91 5 STATE EXPO in silver on their fronts. I have the following cards: 1of8, 5of8, 6of8, #84, #90, #93, #94, #96, #98, #101 for a total of 10 cards. I also have 3 cards with CARD EXPO 92 on their fronts in gold (one of which I found a few months ago). The gold front cards are 3of8, 6of8, & 7of8. I've had all of the others for at least 10 or twelve years but I run a search for additional cards every now and then and have not seen any in all that time. I doubt that they did entire sets for these two shows but it would help if any of you out there have cards with numbers other then mine. If no one has any other numbers that might indicate that I can stop searching because there are more to be found.
catskilleagle
Hi Kyfhomp,

Thanks for the info. I went through my "transportation promos" and saw that I have just one of the '91 5 State Expo cards and it is #96. Yes, if that string holds, it looks like you have determined the set number and solved a promo mystery.

The foil on the CARD EXPO '92 cards looks silver to me but maybe I need to see it in natural light.

Jess
cardaddict
I've made my way all the way to my X rated, er, uhm, I mean, X lettered comics, and I found this one with two trading cards inside it! Are they rare or common? Anyone know? 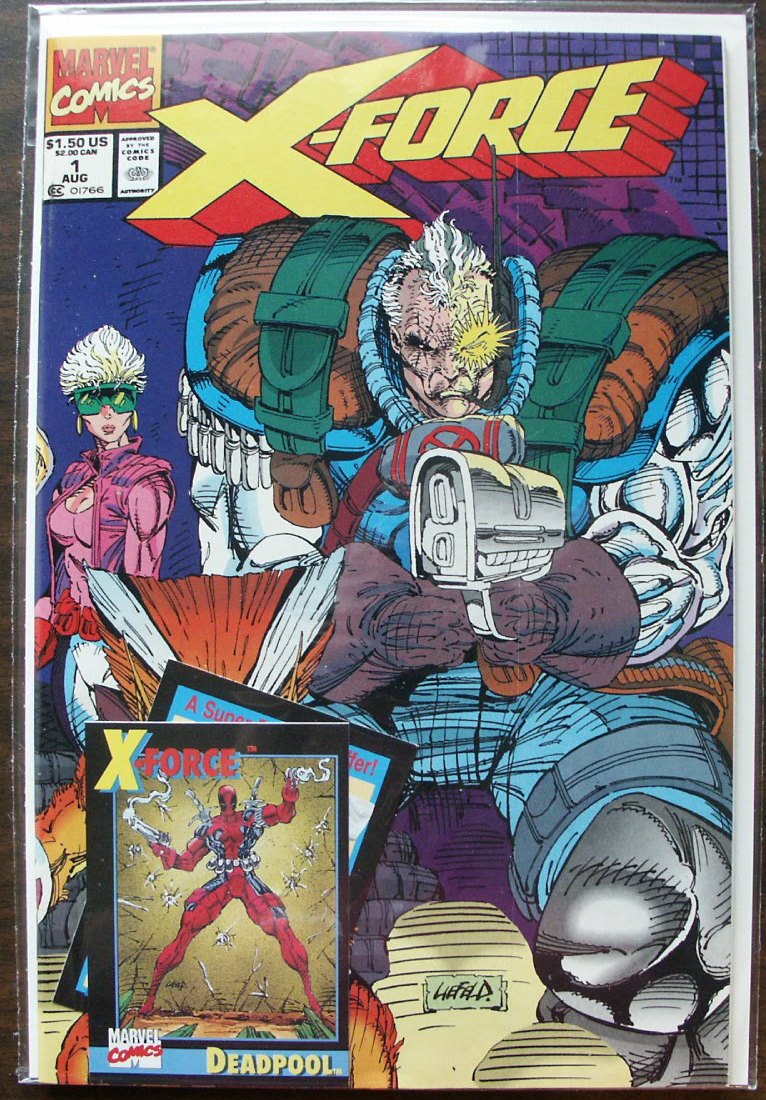 Are they rare or common? Anyone know?

common, they were in every comic.

cardaddict
Figures. I also found a sealed Wizard Magazine with a Star Wars and a Judge Dredd card in it. It seems there were different Judge cards inserted.
pcetodd
Yeah there ere six Dredd card, but each had thin lettering on front and thick lettering on front.

The X-Force had 5 promos (Im too lazy to look), one per copy. They printed a zillion of them.
catskilleagle
Here's an oddball card that promotes the prize-winning custom show truck "Wrapped with Envy." I bought it with a couple of promos it was grouped with at a sports memorabilia store in the late 90's. It's also unnumbered so I'm reasonably sure it's a promo though that's not a foolproof indicator. In any case I haven't seen another one nor another card like it since. It looks like something that might have been inserted with a model kit or maybe it's a car show giveaway. Somebody went to the extra expense of purple foil lettering for the name on the front and the extra background image on the back.

catskilleagle
This card was inserted with a "Wind Riders" kid's meal toy at Dairy Queen. I've seen only two different and don't know the set number. The card fronts show photos of breeds of horses and the backs provide background info with blue borders on the front and back. They are undated but the toy packaging says "2001." The cards have rounded corners and tend to be bent or creased due to being pressed against the toy. 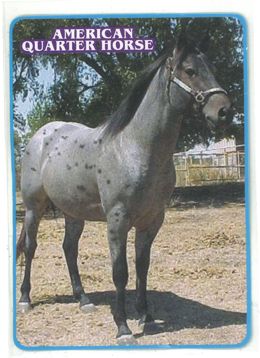 .
catskilleagle
This card promotes the world premiere of the movie, "River of Souls," an additional Babylon 5 story, that was released after the end of the TV series. It notes that the movie premiere was on November 8 but not the year which was 1998. The card measures 4 x 6 inches. The back also promotes the official movie novelization that was released around that time. 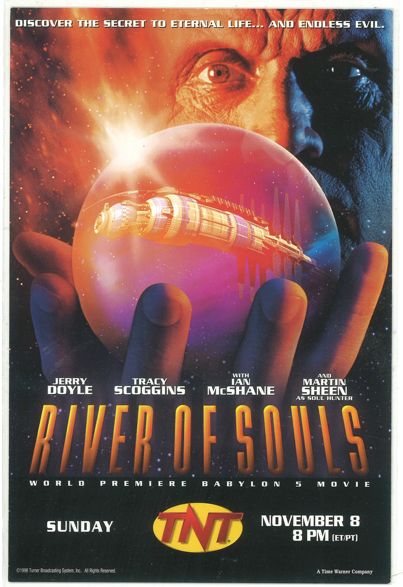 catskilleagle
Here is the front of a header card and the back of the second card in a 9-card foil pack that General Motors sent out to customers in 2001 to promote the 2002 Buick Rendezvous, a vehicle said to be an SUV with the comfort of a sedan. Most of the cards highlight various features of the vehicle but one card is devoted to the Tiger Woods Foundation, with Tiger Woods being the celebrity pitchman on the front of the pack.

Eight of the cards bear a silver foil stamp of the Buick logo. The last card in the pack is clear acetate with a photo of the Rendezvous. It's meant for you to hold up as you stand within view of your own driveway so you can see it there. The scan shows the front of the first card in the pack and the back of the second.

These cards (and other Rendezvous cards released in 2000 and 2001) can be hard to find at a reasonable price as sellers have tended to overvalue any card with Tiger Woods on it. If you can find a pack for about $10, grab it. 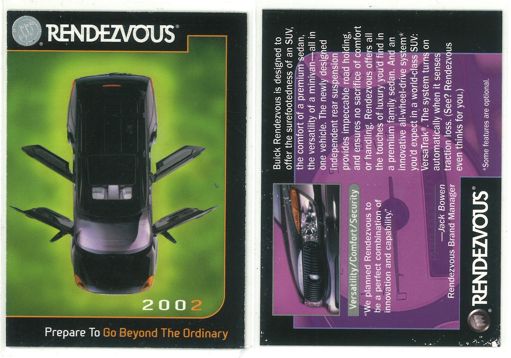 This message has been edited. Last edited by: catskilleagle,
catskilleagle
Here's an oddball Simpsons promo from 2001. It's a 6 sticker set seeded one per package of Black Diamond Cheestrings snacks in Australia. They are property stickers for sticking to binders, books, or whatever but they promote the company (Black Diamond and Cheestrings logos on the front) and the Simpsons in general. Each shows a Simpsons character (3 with Bart, one Homer, one Maggie, and one Milhouse). The backs are all the same. They measure 2 x 3 inches with rounded corners.

catskilleagle
Here's a sticker from the Smash Hits set (1995), inserted one per package of Uncle Tobys snack products in Australia. Each one features a music superstar of the 90's (Boyz II men in this case) and measures 2 3/8 x 2 7/8 inches. The card backs list prizes and how to mail away for a chance to win one of them but all the fine print left no room for text for the subject on the fronts. The promotion ran during the first half of 1995. I haven't seen any other stickers for a while but I think there are at least three others. 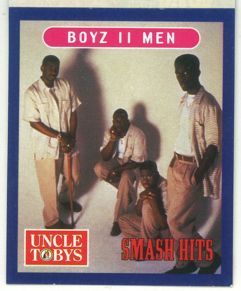 catskilleagle
This is #3 from a lesser-seen Marvel-related set of 8 dual-image lenticular cards. Each card was inserted one per package in BN snacks in France in 2004 and each measures 2 1/8 x 2 15/16. Though the promotion ran in 2004, the same year as the release of the "Spider-Man 2" movie with Tobey Maguire, the cards do not mention the movie. 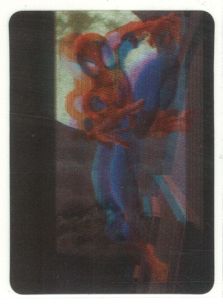 cardaddict
I've got HULK and SPIDER-MAN cards similar to that that were released in the US in Ritz cracker boxes. I think I kept every box I bought, but I ate the crackers.
catskilleagle
The Spider-Man Ritz cards can be found but I'm not sure I've seen the Hulk ones. There were Spider-Man 3 lenticular cards inserted with Kraft products as well.

quote:
Originally posted by cardaddict:
I've got HULK and SPIDER-MAN cards similar to that that were released in the US in Ritz cracker boxes. I think I kept every box I bought, but I ate the crackers.

pcetodd
Daredevil too.
cardaddict
Here are the HULK ones, still connected to the boxes: 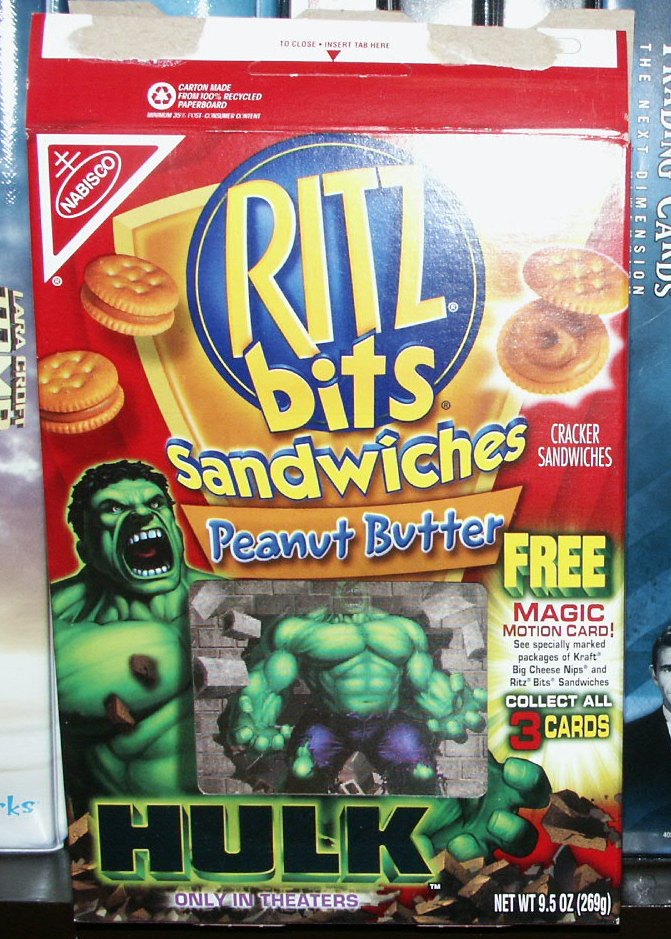 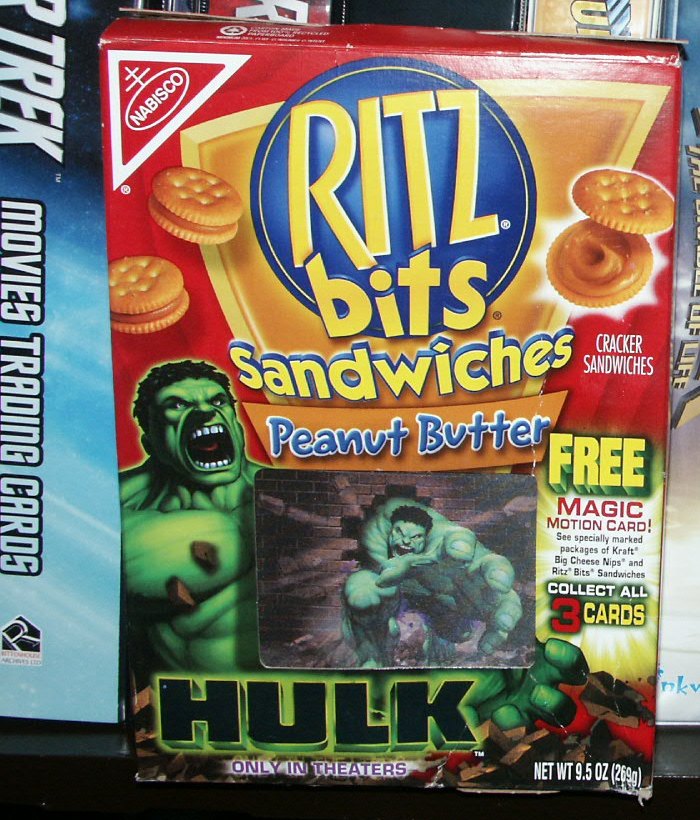 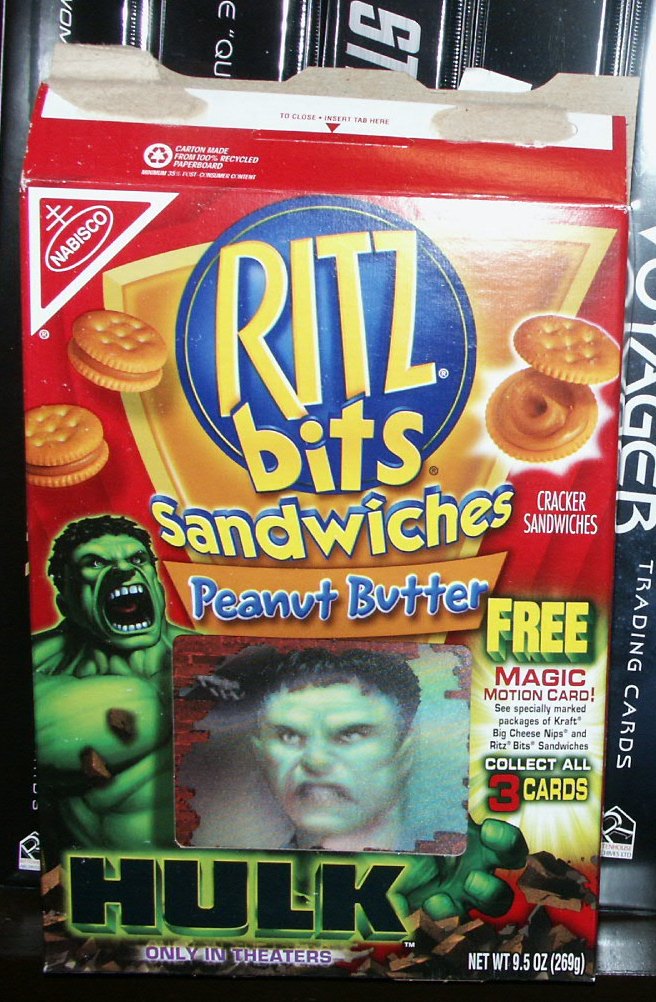 Rumors that they used me for the model are false.