I just learned something new about these Stuart Little cards. This set is a 5-card one as follows:

quote:
Originally posted by promoking:
I like these too. I think that considering how difficult they have been to find over the last 17 years,the set probably consists of only 4 cards. Just a deduction. But, If I'm right, since I have 3 different ones and the one in your picture IS the one I'm missing, then you must reciprocally also be missing one of the ones I have. I recently came across a double on these. If It's the one you're missing I will send it to you.

promoking
Catskilleagle,
Thanks! Of course now it's another one I need to add. Did you find them all?

catskilleagle
No, I have three of them. I found two a couple of years ago while looking for singles of the Casa Fiesta set.

quote:
Originally posted by promoking:
Catskilleagle,
Thanks! Of course now it's another one I need to add. Did you find them all?

catskilleagle
Here's a card that promotes a movie poster auction at Christie's East in New York City on December 9, 1991. On the back it mentions a past auction and there's also an order form for the auction catalog for the 1991 event. The front features the artwork from one of the one-sheet movie posters for the 1925 silent film version of "The Phantom of the Opera," starring Lon Chaney. The card measures about 3 1/2 x 5 1/2 inches (roughly 9 x 14 cm).

To a kid from the 70's that version of the Phantom looks like "The Hooded Claw" from the Penelope Pitstop cartoon. 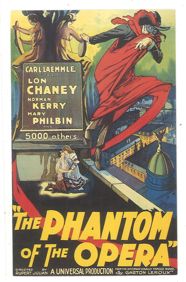 catskilleagle
Here's one of 6 stickers (Henson Associates Inc., 1988) that were inserted one per box of General Mills cereal in Canada. Each one measures 2 1/2 x 3 inches and was in its own cello-pack. Each is unnumbered with a blank back. Each one has French and English text and the General Mills logo. The artwork shows some of the main Muppet characters reimagined as young children. 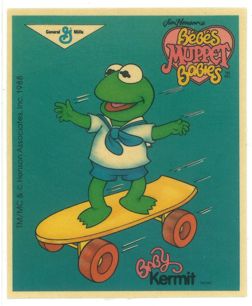 This message has been edited. Last edited by: catskilleagle,
catskilleagle
Like its "The Beatles" 4-card set of unreleased variants of the gold signature chase cards, Sports Time also had a 3-card variant set of the three gold signature cards from the Marilyn Monroe II from 1995. They also differ from the ones in the packs in that they do not have the gold foil facsimile signatures on the fronts. I believe that these cards were just leftovers after enough of the signature cards were finished and just ended up in a box somewhere.

Both the Beatles and Marilyn Monroe unreleased cards appeared on the market in 2004 which was after Sports Time went out of business. 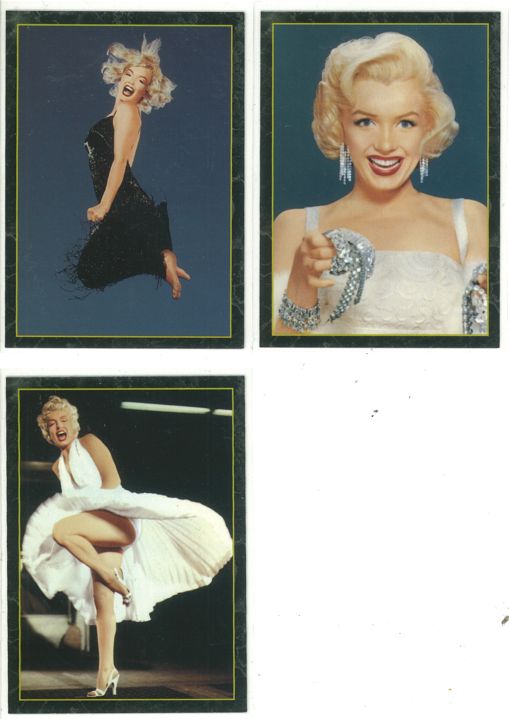 catskilleagle
Here's an oddball card, "Barnabus: Sins of Honor" (Jay Vargas & Felix Lugo, 1992) promoting the comic book series of the same name. You got it free with the purchase of a poster with different artwork though it appears at least a few of the cards were just given out too. The card front is holofoil; the back has background text on the comic book series, signed by the artist, Jay Vargas, and is also hand-numbered out of 500. It measures slightly wider than standard size at 2 5/8 x 3 1/2 inches and is printed on thin stock. 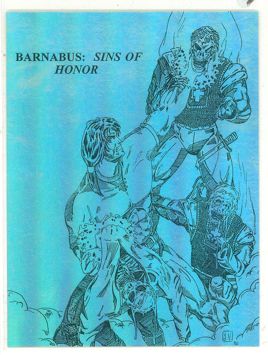 This message has been edited. Last edited by: catskilleagle,
catskilleagle
Here's one I thought someone had already posted a scan of. Promoking lists it in the PCE additions/corrections thread. It's one of the 12 cards in the Canadian Wildlife Federation set. They were inserted one per box of at least one of the Kellogg's cereals in Canada. The cards are unnumbered and standard-sized.

No one seems to know the year of the promotion but the set appears to be from the 90's. They are nice cards for anyone who likes animals/nature. The text on the back is in French and English and bears an illustration of Toucan Sam in the upper left corner and the the Kellogg's logo on the bottom right. 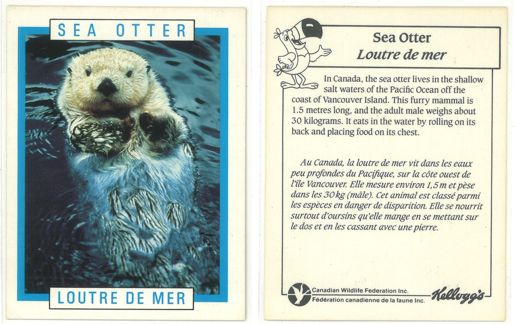 catskilleagle
Here's a card from the "Endangered Species" set that I listed in the PCE additions/corrections thread as follows:

Endangered Species (no year) TCC 14 card set; given out one at a time when purchasing $20 worth of gas at Caltex stations; dual-image lenticular cards; artwork of animals; artist n/k.; each card was in its own white plastic pack which says "Free Moving Action Card!; New Zealand issue...
No. 1 "Koala"
No. 2 "Tarantula Spider"
No. 3 "Siberian Tiger"
No. 4 "Polar Bear"
No. 5 "California Condor"
No. 6 "Alligator Snapping Turtle"
No. 7 "Tuatara"
No. 8 "Asian Elephant"
No. 9 "Javan Rhinoceros"
No. 10 "Humpback Whale"
No. 11 "Irrawaddy Dolphin"
No. 12 "Mountain Gorilla"
No. 13 "Giant Panda"
No. 14 "Estuarine Crocodile"

The same lenticular images were also used in the "Endangered Species" set by The Continuity Group (Australia), but in that set, the cards are unnumbered. The cards below show the front of "Irrawaddy Dolphin" and the two different backs.

catskilleagle
This card was given out by artist, Dave Stevens, when he set up at the San Diego Comic-Con in the late 90's-early 2000's. It features one of his famous artworks of Bettie Page. The card measures 4 x 6 inches and has a blank back. He signed and personalized one for anyone who bought one of his books or prints. I talked to him a few times. Nice guy. I was very sorry to hear of his passing in 2008. 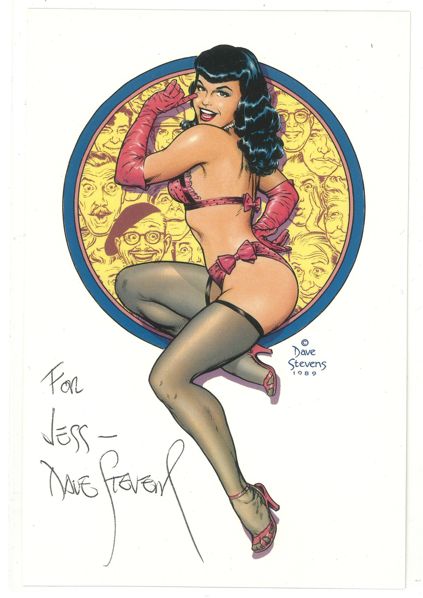 catskilleagle
A movie version of the 60's TV series, "Flipper" was released in 1996. There was a regular set made by Donruss that year. In Germany a 6-card set could be found in Kellogg's cereals - one per box. Here is the front of one card and the back of another one. The cards measure 2 x 2 3/4 and have 3D photo fronts. The backs are largely identical except for the brief description of the still at the top. 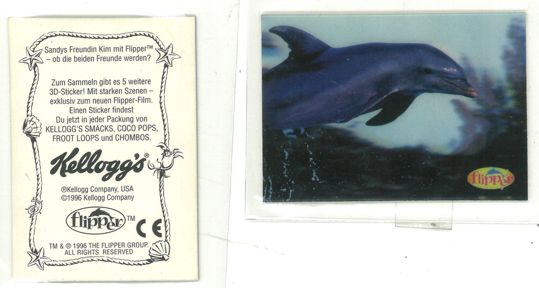 catskilleagle
Here is the Chitty Chitty Bang Bang 4-card set (1998, MGM home Entertainment/Hygrade Food Products) of dual-image lenticulars that was inserted one per package of Ball Park food products. These 2 x 2-inch cards promote the video release of the popular 1968 movie. The backs have the Ball Park Franks logo. The images are a little blurry as the scan caught them as they were starting to shift from one image to another. 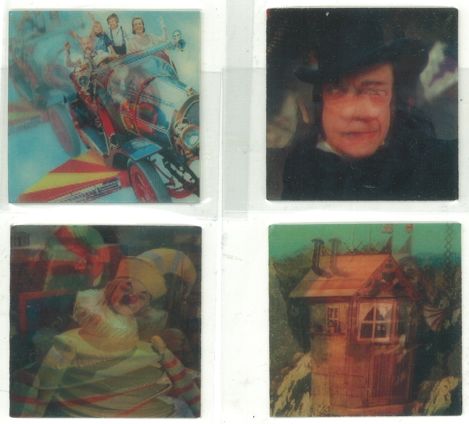 catskilleagle
Here's what's considered an "old" promo because it's from the 80's and maybe as old as from 1983. It's the "Bally Midway Grand Slam Baseball Cards" 6-card set (no year, Bally Midway Mfg. Co.). It was available in a sealed plastic pack reportedly given out at a coin-op trade show. The header card is a title card on the front and it has contact info on the back, The other card fronts show various views of a pinball machine. The other card backs have a trivia question, a baseball fact, and some game tips. The set promotes a baseball-themed pinball machine. It's an uncommon set but it tends to sell in the $15-20 range.

Some of the old promos of the late 70's and 80's called themselves "baseball cards" because they were designed like baseball cards (photo front with a text back). Before "promo card" fell into industry usage, people didn't think about coming up with a term for cards that promoted other things. Here's the breakdown of the set: 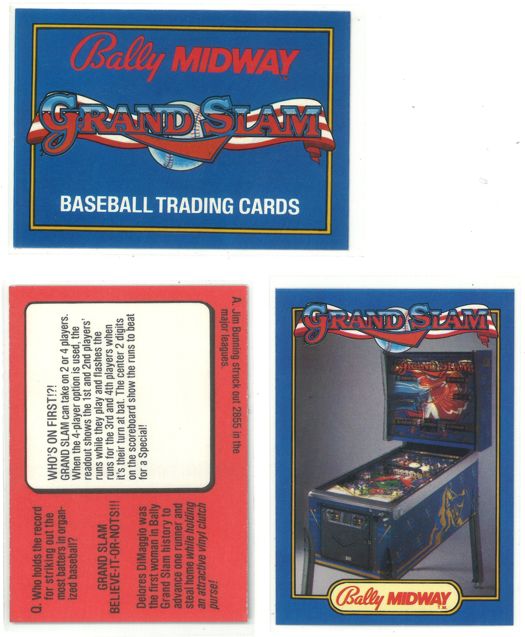 catskilleagle
Here's a promo for wrestling fans. This is a sticker from a set of 35 (1988, Titan Sports, Inc.) that was inserted one per bag of Hostess snacks. There's just enough French and English on the back to say that this was a Canadian issue. The cards measure 1 3/8 x 1 3/4 and each was in its own cello-pack.

Someone else told me the set may be bigger than that but I've seen them just up to #35. 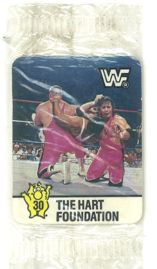 catskilleagle
Here's another "old" promo and this one is from 1980-1981. It's a group of three cards that promote the 1980 and 1981 SEMA (Specialty Market Equipment Association) shows - trade shows for car parts suppliers. Each one features MLB Hall of Famer and car collector, Reggie Jackson, and promotes a car magazine of the time. One of them also bears the Accel (car parts manufacturer) logo. The cards are printed on old-time card stock with text on the backs. There may be other cards in the set but I've seen only these. 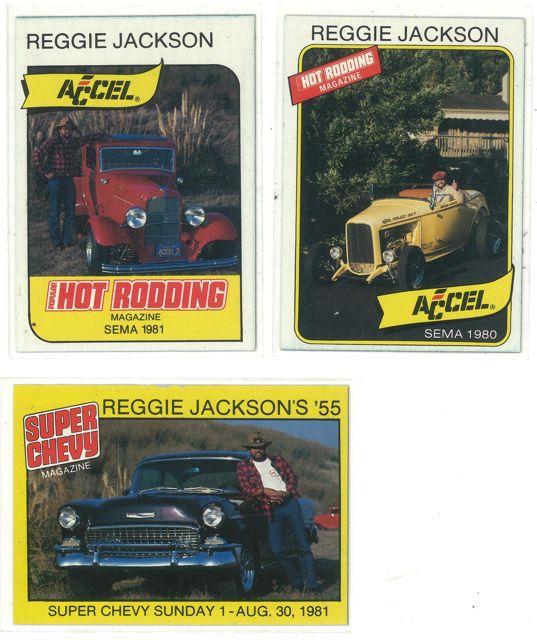 cardaddict
I was looking through my ICC (Incredible Comics Collection) Ward, and I came across this Lady Arcane comic with a trading card insert. I have no idea if the card came with the comic or not, but it probably did. Why would I have it there otherwise? There is also info on the back. If anyone wants the card or wants to see closer pictures, just let me know. The comic itself is virtually worthless. 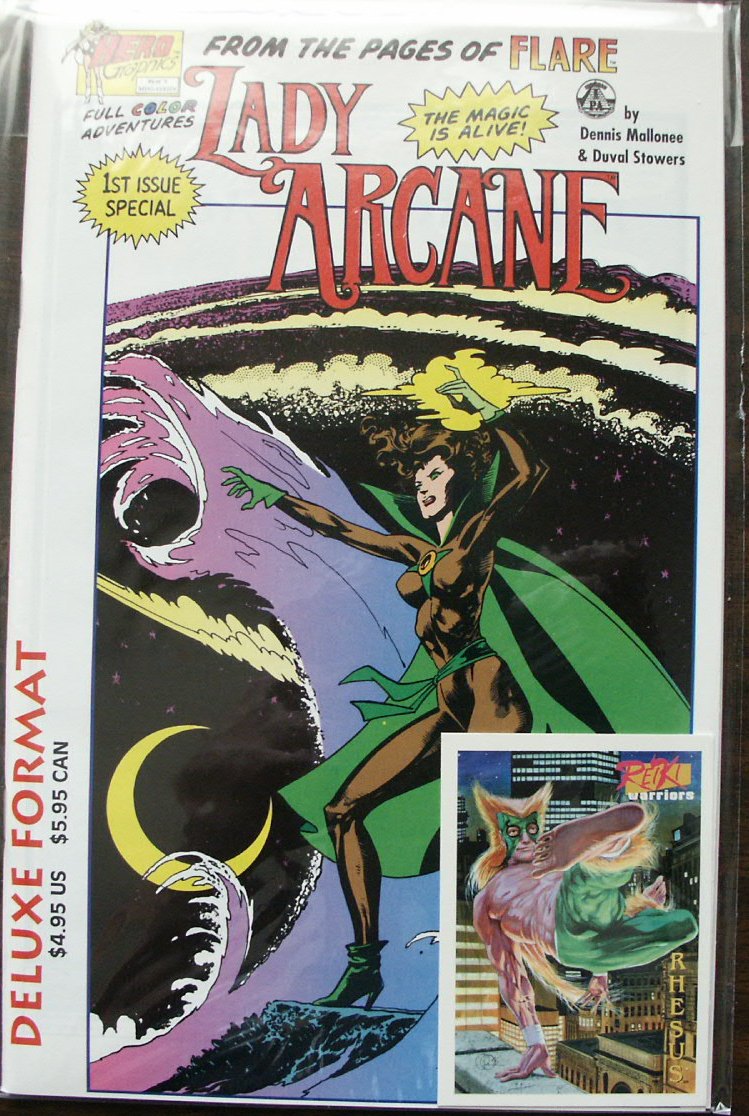 pcetodd
I'll take the card. It comes from a set called Heroic Publishing which were all comic inserts.
cardaddict
Just send me your address.
catskilleagle
Here's a card promoting a line of collectible pins related to the Buzz Lightyear Astro Blasters attraction at Disneyland. It measures 2 1/4 x 3 1/4 inches and is blank-backed. 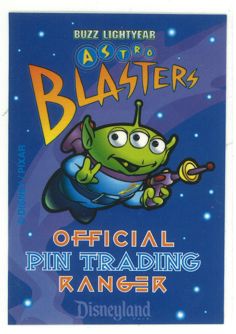 catskilleagle
This is card #7 from the Vans Team 44-card set (1997, Vans Inc.). These cards were given out at Vans shoe stores in 4-card foil packs. The card fronts show photos of extreme sports players. Neither the fronts nor the backa bear any indication that the cards are promotional but the back of the packs says "Free! Collect All 44! Not for Resale." There was also a Series 2 the following year. That set is listed in PCE2008.

I picked up 4-5 packs a few years ago and was lucky with the collation - only one duplicate in the lot. 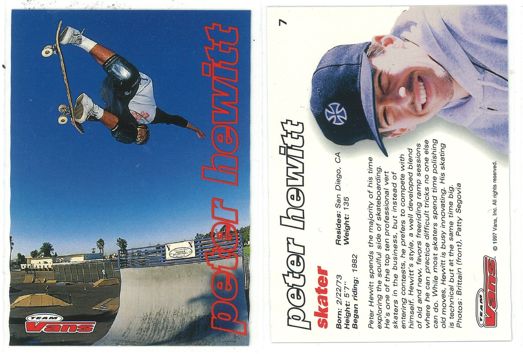