Non-Sport Update's Card Talk
UNLISTED PROMOS PICTURE GUIDE
This topic can be found at:
http://nonsportupdate.infopop.cc/eve/forums/a/tpc/f/274605453/m/8267062236
catskilleagle
UNLISTED PROMOS PICTURE GUIDE
This card promotes "The Dark" (1993, Joseph Naftali and Continuum Comics), a comic series from the early 90's. It's a regular-sized card with a refractor foil front. The back bears text that tells the backstory of "The Dark." It was intended to be serial-numbered out of 100 on the back but is blank where the serial number would be. 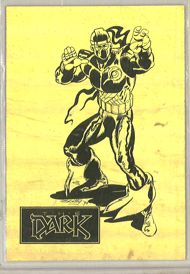 catskilleagle
Here is a lesser-known promo sticker released by AC Comics back in 1993. I read that 5 different stickers, all showing the character, Ms. Victory, were available in the same issue (FemForce Up Close #6) but only one per sealed copy. I've seen two of them. 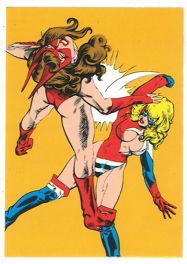 cardaddict
That's a promo I'd like to have just for its artistic merit. 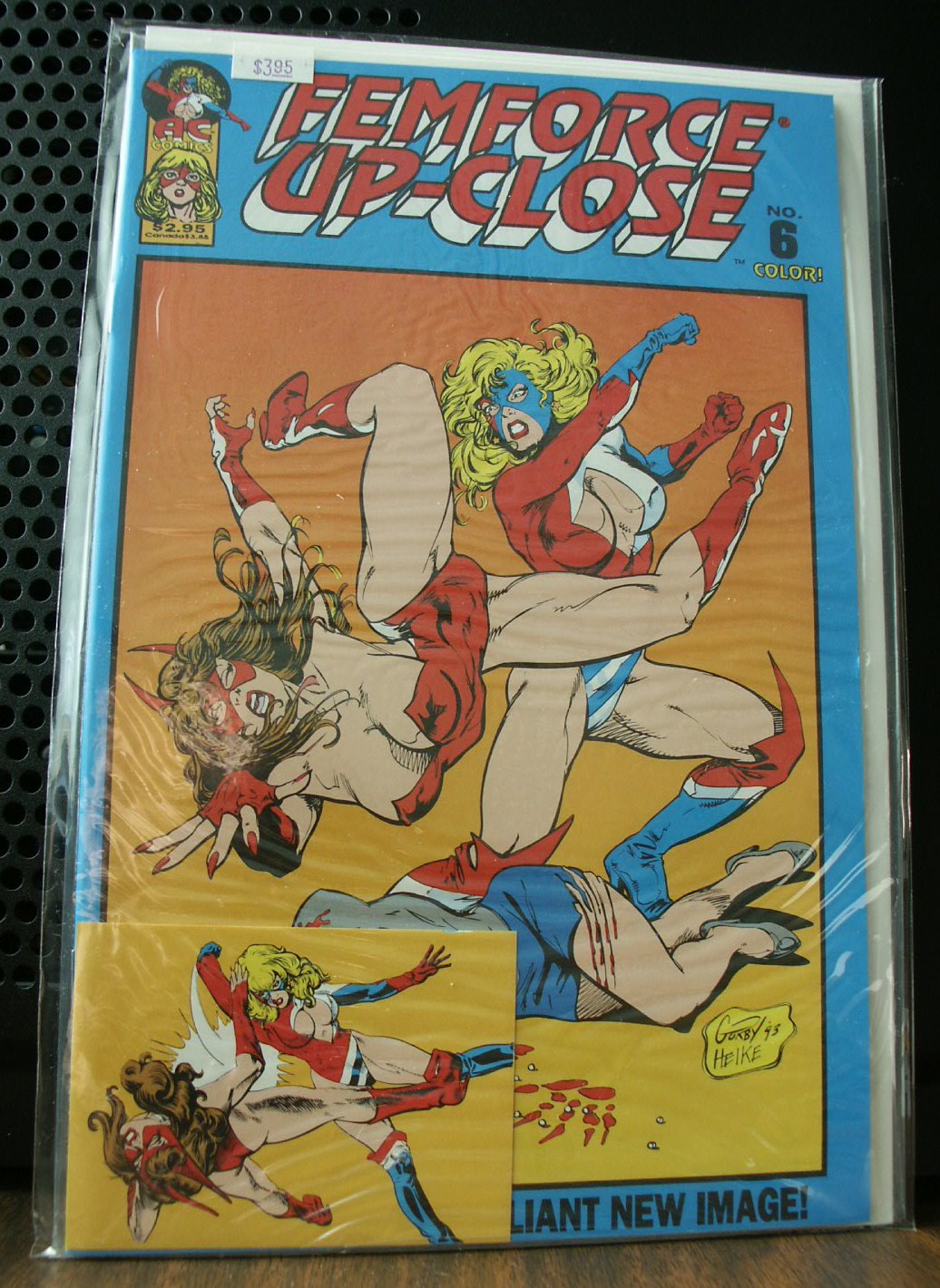 This message has been edited. Last edited by: cardaddict,
cardaddict
I looked through my few (hundred) issues of Femforce to see if there were any more cards stuck in them, and found a few items of interest, so I thought I'd share: 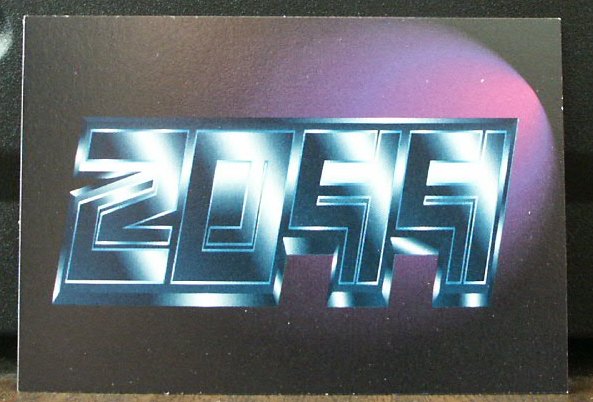 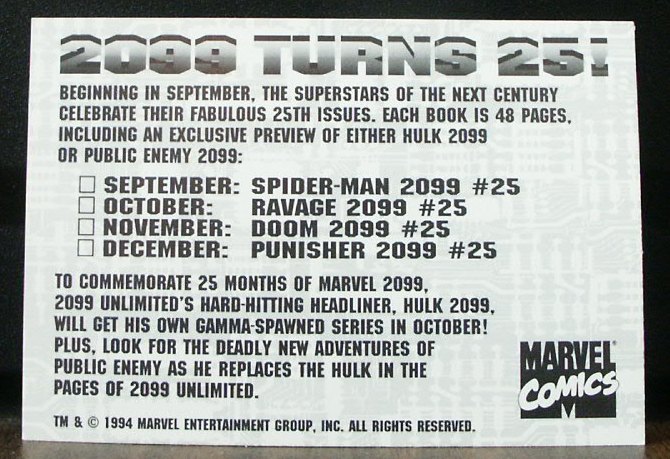 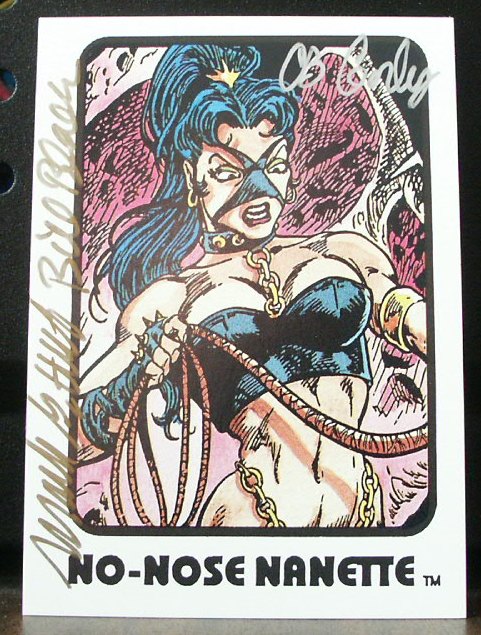 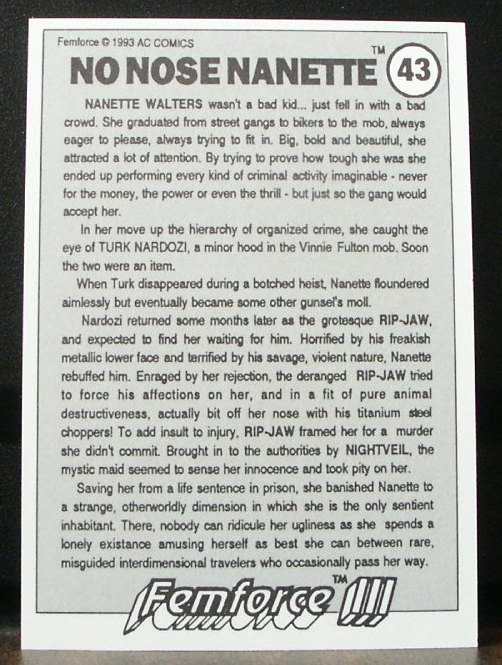 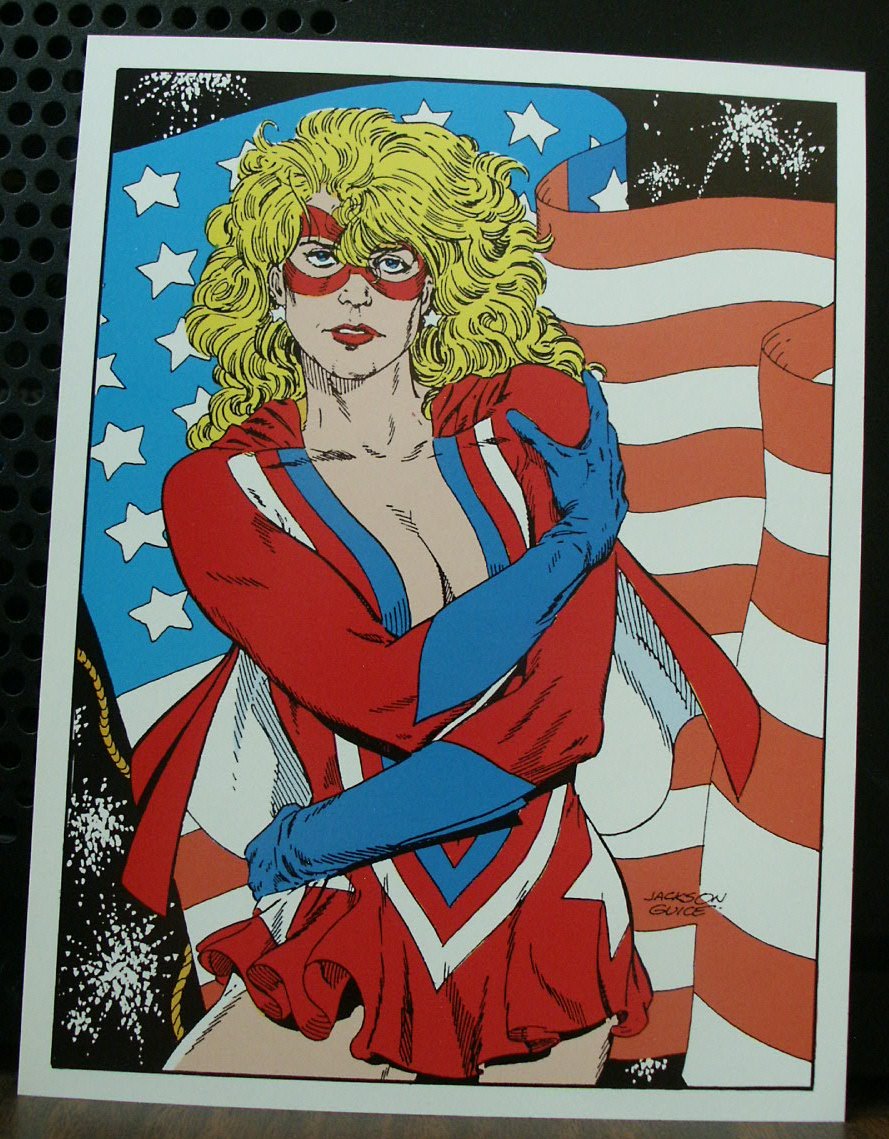 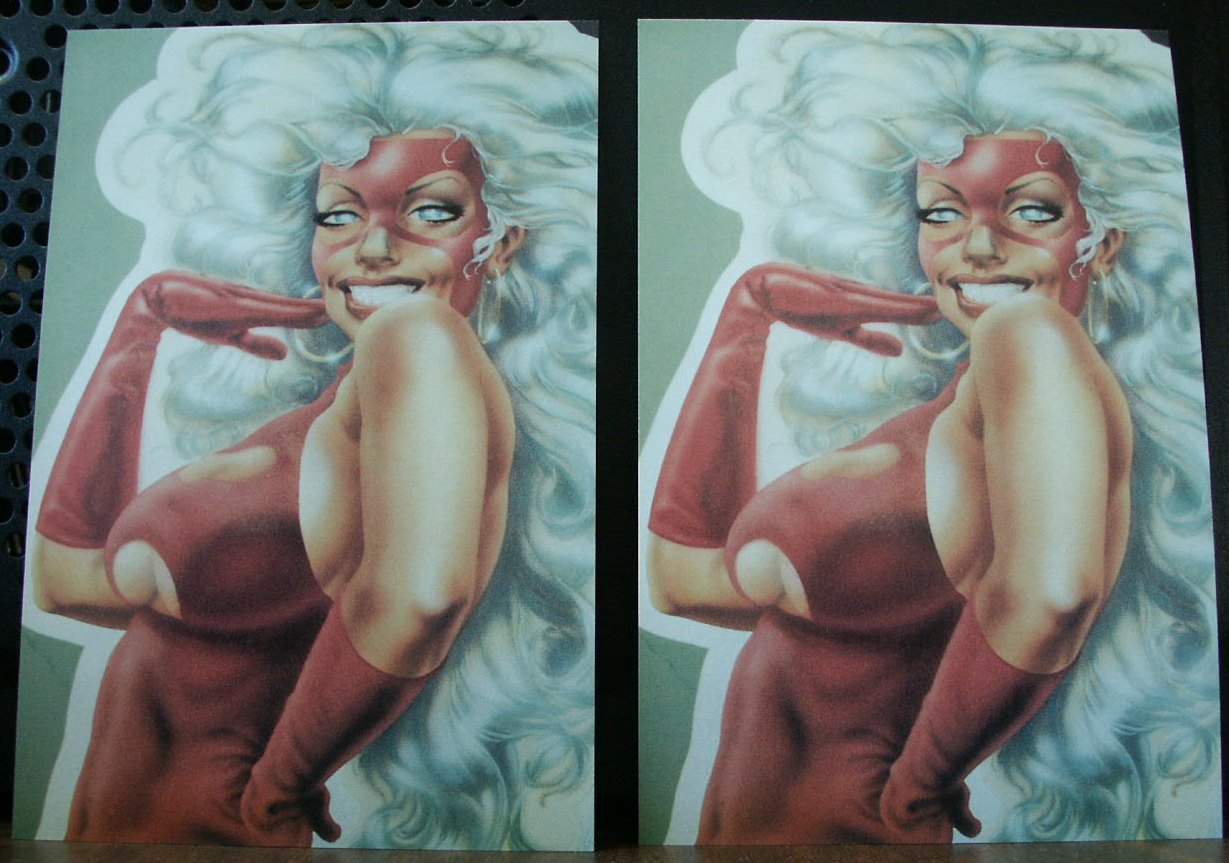 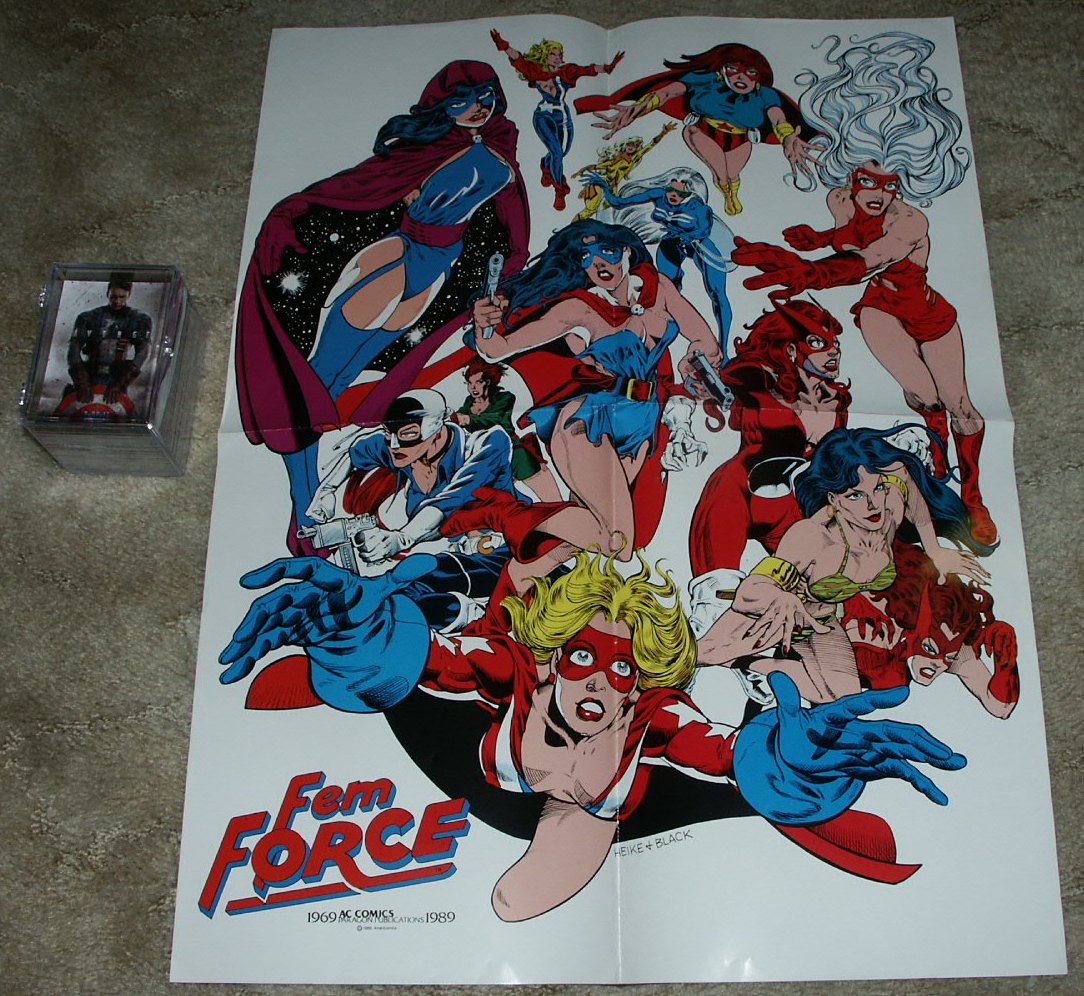 Great stuff! Are those roughly square-shaped items that say "AC Comics" stickers too? I haven't seen that one before. I have seen a couple of those promo posters/strips but they are not often offered.

That #43 No-Nose Nanette card is unusual in that it was a promo in some AC Comics promo card packs and it was also inserted with specially-marked factory sets of FemForce III ordered through Diamond. I think it was also signed and given out at shows (not sure on that).

Jess
cardaddict
Yes, those are all stickers.

A, uhm, friend of mine, yes, that's it, used to belong to the FEMFORCE FAN CLUB (I would NEVER do such a silly thing), and that's where all this stuff came from.
catskilleagle
Yeah, if I had known about the FemForce Fan Club, I wouldn't have joined it either but one of my friends would have and I would have ended up with the stickers and posters somehow too.

quote:
Originally posted by cardaddict:
Yes, those are all stickers.

A, uhm, friend of mine, yes, that's it, used to belong to the FEMFORCE FAN CLUB (I would NEVER do such a silly thing), and that's where all this stuff came from.

catskilleagle
Here are two cards from the California Raisins 6-card set (1988, Hardee's/Applause Licensing). Each one was inserted in its own cello-pack one per kid's meal at Hardee's restaurants. The California Raisins were originally created in the mid-80's for an animated commercial promoting the raisin industry in California but the singing and dancing group became popular everywhere and the campaign lasted into the late 90's with more commercials and spun off into their own TV series and a line of merchandise (toys, lunchboxes, posters, and even their own video game and record deal. They were huge (but maybe not a big enough deal to get their own space on Cardaddict's bookshelves). 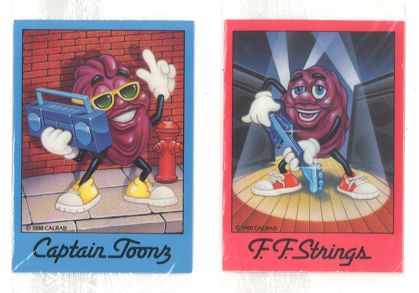 This message has been edited. Last edited by: catskilleagle,
catskilleagle
These are sample variants of the 4-card 24kt gold signature series chase set from The Beatles (Sports Time, 1996) trading card set. They differ from the rare ones in the packs (seeded 1 per 144 packs according to Allender) in that they do not have the gold foil signatures on the fronts. These cards appeared on the market after the company went out of business. 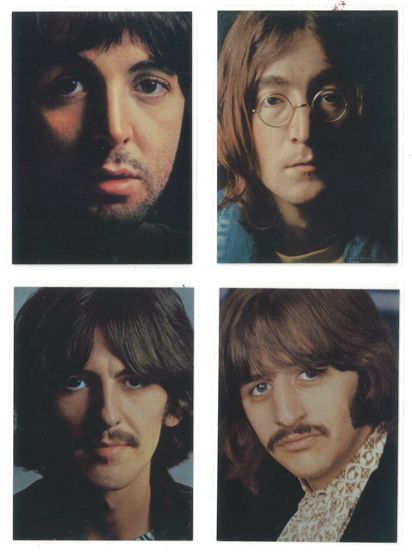 I always liked the Beatles. I started listening to the radio a lot in late 1981, driving to and from school. They had broken up over ten years before and even Paul McCartney and Wings had disbanded by then. I was amazed at how many Beatles songs were playing on the "easy rock" stations and at some point I started a list. It came to over 50 (maybe 54?). It's quite a jarring difference these days because I don't hear many 60's songs on the radio anymore - much less any Beatles tune (more likely to hear Aerosmith's version of "Come Together" than the Beatles original).

I mention that because I was surprised to learn that the gold signature chase cards from the Sports Time have held their value. Twenty years ago, they were going for about $50 per card and they are still going for about that today as a rough average with that being the high end of the range. You would think that the value would have gone down by now on something from the 90's about the 60's.

Anyway, here's the other sample that reached the market after the company shut down. It's a variant of the redemption card. The ones in the packs were serial-numbered out of 100 with each one redeemable for a particular piece of Beatles memorabilia so the cards were titled "Beatlebilia" cards. The variant is blank where the serial-number would be on the pack-pulled card. I see fewer of these than the gold signature samples but they all go for about $3-5 each when you do find them. This is the back (the front is the same): 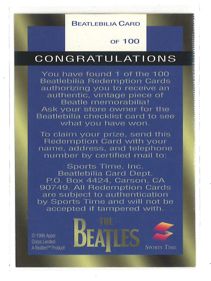 This message has been edited. Last edited by: catskilleagle,
cardaddict
Very nice.
I think at one point in their career, John Lennon said The Beatles were even bigger than Mickey Mouse. 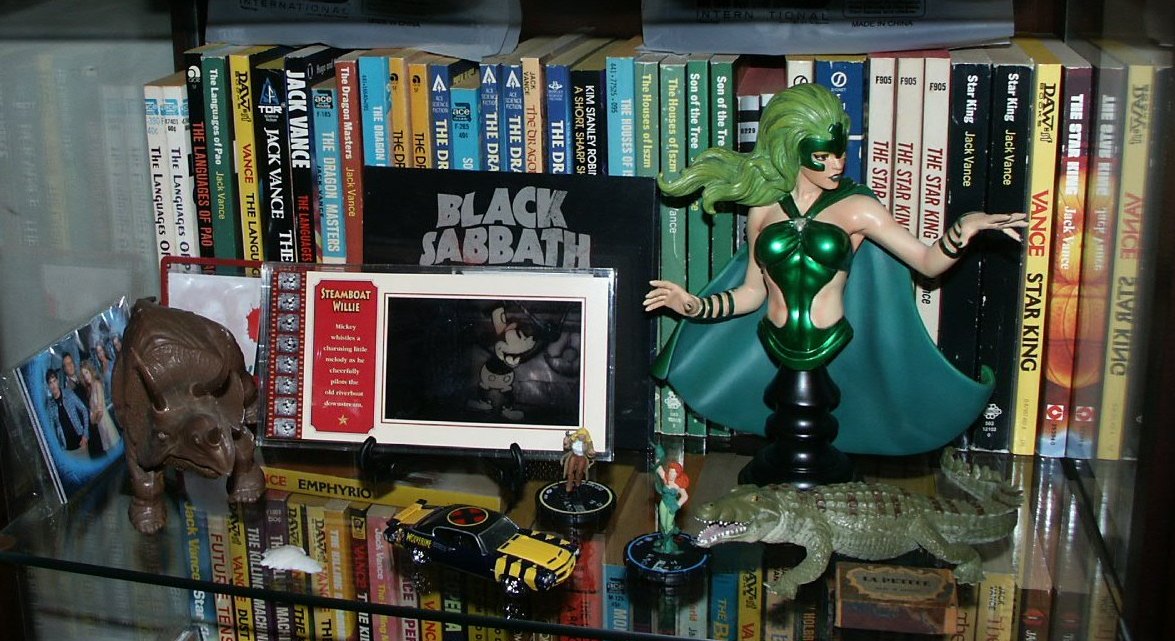 I also have an uncropped image of this photo if anyone is interested.
I swear IMGUR is getting harder and harder to use. Why can't they can't leave things alone instead of 'improving' them all the time!This message has been edited. Last edited by: cardaddict,
catskilleagle
That Triceratops looks familiar and that's a lot of copies of "The Star King." Do you use them as coasters?

Lennon did assert that the Beatles were more popular than Jesus.

Jess
catskilleagle
The scan below shows the front of the specially-printed, fold-open cardstock box that contains a 6-card set promoting the 2008 fantasy/action movie, "The Forbidden Kingdom," starring Jackie Chan and Jet Li. It also shows the first card in the box, "The Traveler." I don't know how it was distributed but it might have been a prize giveaway by movie theaters. The box also contained a packaged stick of gum.

The unnumbered cards are 3 x 4 1/2 inches and have foil fronts with each showing a character from the film. The backs provide background information on the character. Nice cards.

catskilleagle
Here is a card that is part of a set of Warner Bros. Special Edition Collector's Cards inserted with specially-stickered VHS copies of classic Warner Brothers movies in 2000. The unnumbered cards are 3 1/2 x 4 1/2 and are miniature versions of lobby cards. I don't know the set number but it seems like I find one I haven't seen before almost every year. They are blank-backed and have no markings as to their origin. A seller on Ebay once offered a "The Searchers" card but didn't know where it came from.

The videos that contain a card have a sticker on the packaging that says "Bonus! Collector's Card Inside." Here's a list of the cards I have or have seen: 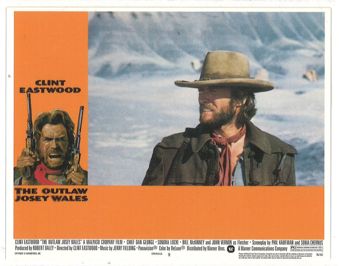 pcetodd
I want these! Nice find.
cardaddict
That's great!
I have the actual 11" X 14" lobby card myself, would love to find the trading card to match!

"Are you going to trade those cards, or whistle Dixie?"

Of course, I may no longer be able to type the word 'Dixie' without severe repercussions.
Raven

quote:
Originally posted by cardaddict:
Of course, I may no longer be able to type the word 'Dixie' without severe repercussions.