catskilleagle
Here are 4 of the 6 stickers in the "Beetlejuice" promo set (Warner Bros., 1988). These were given out one sticker per person at movie theaters. I was told someone was handing them out to people standing in line. Each 3 x 5-inch sticker was tucked in a colorful fold-out brochure which shows the photos on all the sticker fronts. The fold-out says "Beetlejuice The Beginner's Guide to Seeing Ghosts."

Single stickers are seen for sale occasionally so it takes some time to build a set at this point. Sometimes, you can find a lot with a brochure and a sticker or two. Despite the relative rarity, the stickers are generally cheap - maybe $3-5 each. 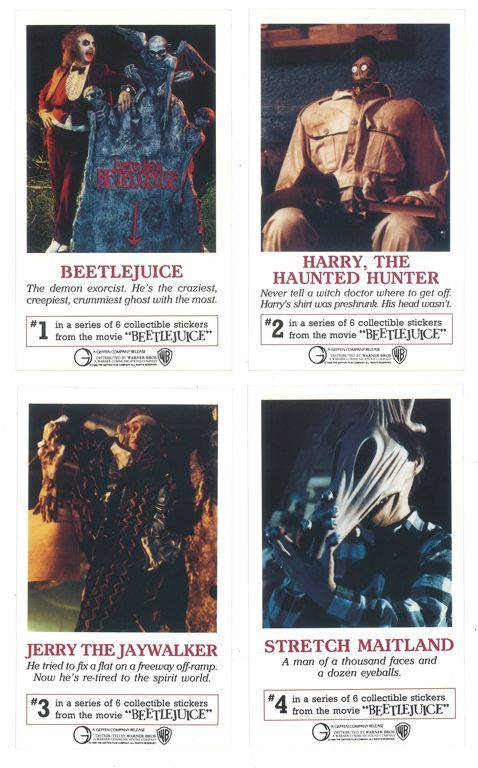 catskilleagle
This is the 9-card Peanuts set that was available though a Ziploc promotion - likely one card per box. There's a slight range of opinion about the year of release - sometime in the 80's or 1990. The date on the backs varies from card to card (1950's to 1968) but those appear to be the original copyright dates of the individual images. It's one of the older promo sets of the modern era and yet you can find it at a low price. 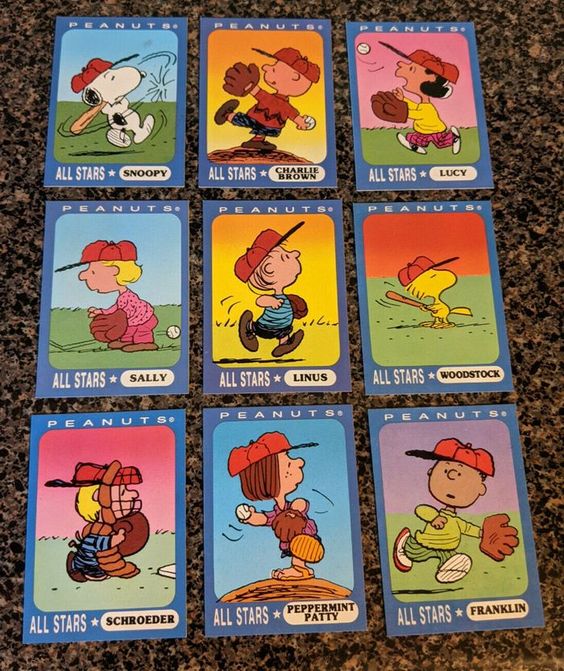 catskilleagle
Here's a promo phone card, Kathy Smith (ACMI, 1995). It was given out at the San Francisco Telecard Expo (April 26-30, 1995), commemorating the show and its collaboration with the fitness expert. It's the standard size for a phone card at 2 1/8 x 3 3/8 inches and serial-numbered out of 2000 on the front.

There was a time when it looked like phone card collecting in general was going somewhere. There was a lot of variety but it was hurt more than trading card collecting when the recession hit in 2008. I think it was in decline even before then with the heyday really being in the 90's.

Promo phone cards never really caught on with promo card collectors. We all seemed to have just a few. 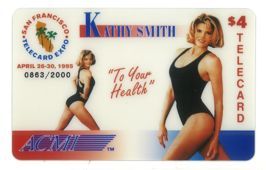 catskilleagle
Here's a promo for "The Norm Show," a 1999-2001 sitcom starring legendary comedian, Norm MacDonald. I think it was given out at a local collectibles show. It measures 4 x 6 inches.

We miss you, Norm. 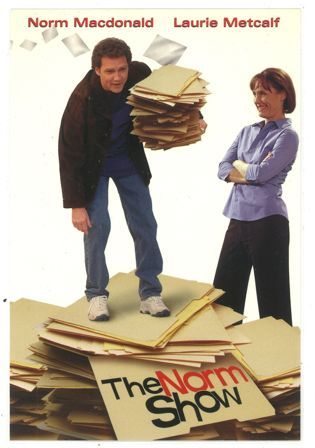 catskilleagle
This card (Score, 2001) promotes an event at Wizard World 2001 where the Buffy The Vampire Slayer CCG product was previewed before its release. It measures 6 x 9 inches. 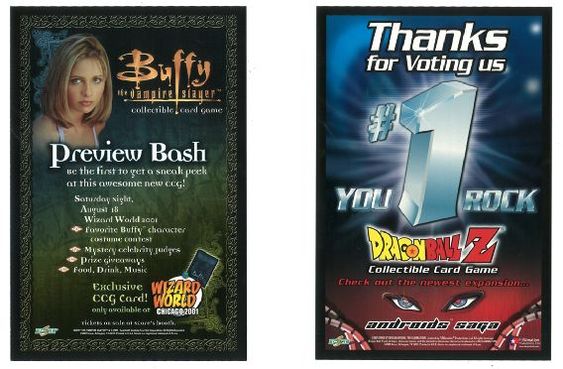 catskilleagle
Here's a phone card (Image Tech, 1996) that was given out at the Siggraph International Conference in New Orleans (August 4-9, 1996). The card measures 2 1/8 x 3 5/16 inches. The front has a nice 3D effect (the mask and ribbon appear to float over the background). The back says "not for retail sale" and is serial-numbered out of 5500.

Siggraph is an annual conference on computer graphics. I've never been to it but one of my friends has attended it regularly as part of his work. 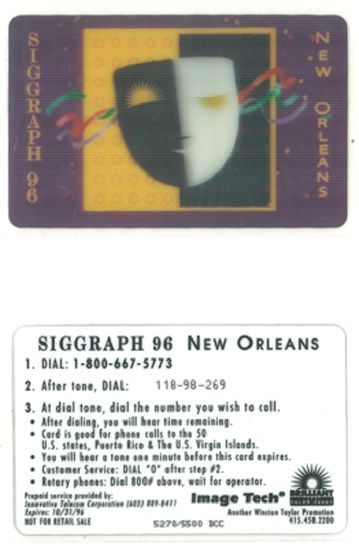 catskilleagle
Here's a promo from the 1991 SF Sports Collectors Card Expo in San Francisco. It's one of those oddball promos that could be used as a ticket to an event. In this case, it was a party that took place on the Sunday of the show that ran through Labor Day weekend that year. It became a collectible as it's in the form of a trading card. The card bears the 1991 Expo logo on front and back as well as Pro Set and Courtside logos (plus two dealer logos) so the card also promotes the show and those companies. It's also serial-numbered though it doesn't provide the total. 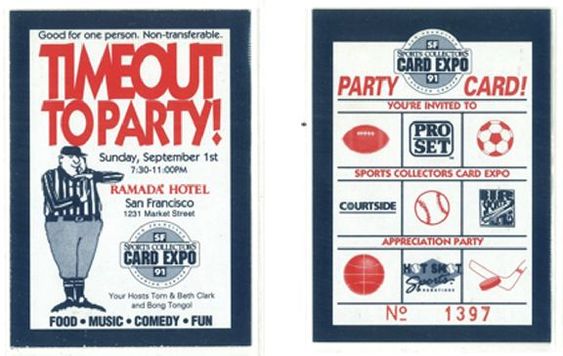 catskilleagle
Here's a promo for a trade paperback edition of "Fred the Possessed Flower" by Nick Hardcastle (Happy Predator Publications, 1999). It was given out at the 1999 San Diego Comic Con and measures 3 x 4 inches.

This one isn't often seen for sale.

Edit: I checked some old notes. This promo was in souvenir bags with the show guide at the 1999 SDCC. It might not have been noticed by a lot of attendees and got tossed out. It might explain why it's a rare sighting now. 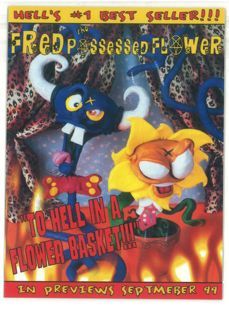 This message has been edited. Last edited by: catskilleagle,
catskilleagle
Here's an unnumbered promo from a set of 3 for the boxing history set, "Brown's 10th Edition" (Brown's Boxing Cards in association with Seidman Productions Inc., 1994). It was given out at card shows and boxing events in Missouri. It's stamped "promo" on the back.

PCE2008 covers promos from a number of boxing and other less-documented sports sets. This promo is for a set celebrating boxing history. 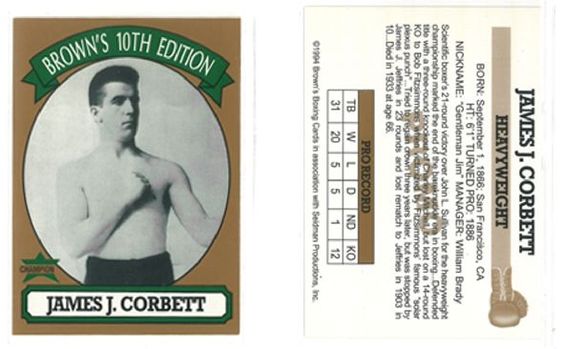 catskilleagle
This unnumbered card (Dreamworks Animation, L.L.C., 2005) promotes the animated movie, "Madagascar." It's said to be a printer's sample - perhaps an unreleased prototype. It has a nice 3D effect with French text on the back and rounded corners. It has the look of something that would have been inserted in cereal or some other food product released in France. 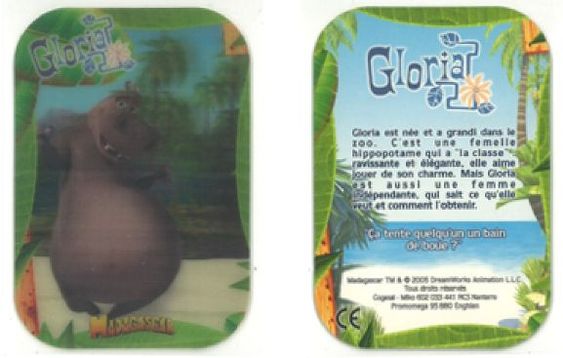 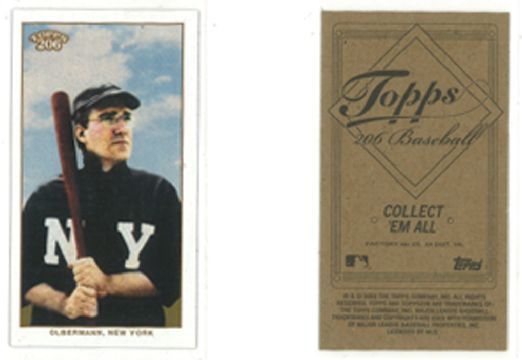 catskilleagle
Here's one from a set of Alaska Airlines (undated) cards. I've seen at least two different ones - set number unknown. No one seems to know how they were distributed but they might have been given out on the plane. I've asked a few sellers offering them but they never seem to remember or they got them second-hand. The cards measure 3 1/4 x 4 1/4 inches. Card backs provide background info on the plane on the front. 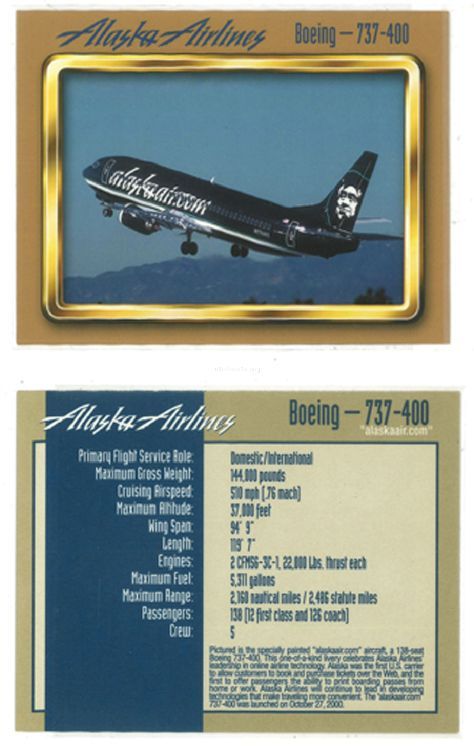 I found an image of all 5 Stuart Little cards. Where did I find it? Out in the back pages of Card Talk.


quote:
Originally posted by promoking:
Catskilleagle,
Thanks! Of course now it's another one I need to add. Did you find them all?

promoking
Jess,
I often refer to Cardtalk for answers to card questions. We truly have a treasure trove of information here. Keep on posting the pictures of promos.

catskilleagle
Yes, Card Talk has been around long enough that some questions posed recently were asked and answered years ago. Sometimes, I go back through pages just to see what's back there. Many links are broken. I try to replace scans when I can.


quote:
Originally posted by promoking:
Jess,
I often refer to Cardtalk for answers to card questions. We truly have a treasure trove of information here. Keep on posting the pictures of promos.

catskilleagle
This one has been discussed before in a couple of other threads. It's the SP1 promo (Inkworks, 1997) for the "Lost in Space Classic Episodes Series," - a set that was never produced. Two other promos were released but this one appeared on the market only after the company went out of business which was also after PCE2008 was published. It seems there were a number of them available because it wasn't too hard to find after it was discovered and you can still find it for a reasonable price now. 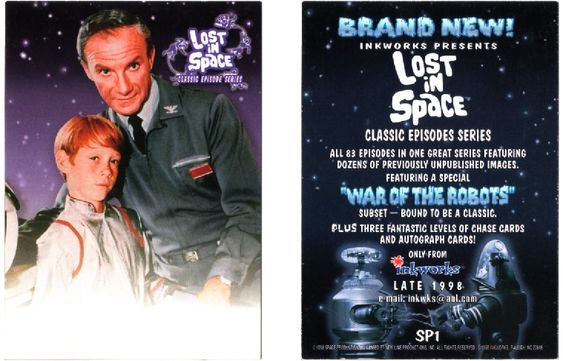 I found the other one I have from the Disney Sticker cards set: 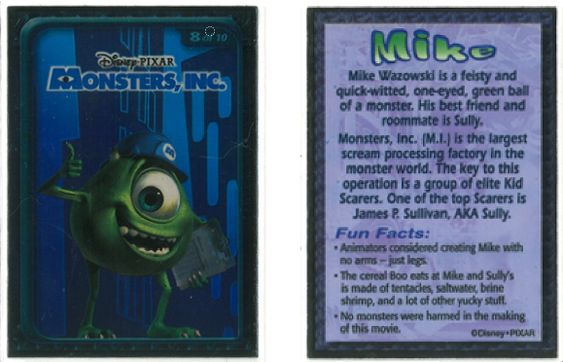 quote:
Originally posted by promoking:
Catskill,
That disney card is awesome. Can you post the other cards from the set?