Non-Sport Update's Card Talk
UNLISTED PROMOS PICTURE GUIDE
This topic can be found at:
http://nonsportupdate.infopop.cc/eve/forums/a/tpc/f/274605453/m/8267062236
catskilleagle
UNLISTED PROMOS PICTURE GUIDE
Here are 3 cards from the 22-card "Mr. Magorium's Wonder Emporium" set (Walden Media, LLC, 2007). The whole set was in a foil pack given out at theaters with the cards featuring a mix of artwork and photos. Most of the cards are pre-cut with side slots for building a vertical 3D puzzle with them. Many fronts say "You Have To Believe It To See It" and "In Theaters November 16th. "The card titles are on the backs. Some of the backs promote other products but the set promotes the movie of the same name.

catskilleagle
This is card #14 from the 30-card "Rock Star Collector Cards" set (1990). Cards were inserted in Bodalla cheese products in Australia and feature photos of various 80's artists. They measure 2 3/8 x 3 1/8 inches - a little smaller than standard-size, The card backs provide information for a prize drawing. Here's a partial checklist (cards I've seen) 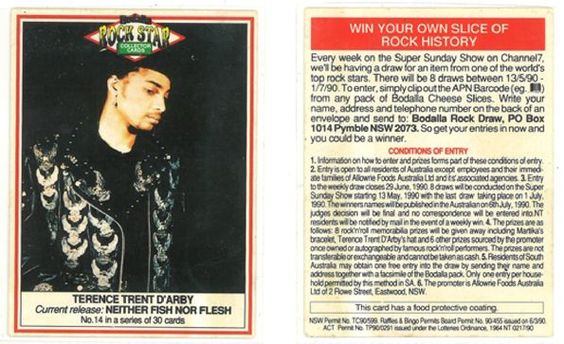 This message has been edited. Last edited by: catskilleagle,
catskilleagle
This is one "Racing Dreams Cereal Series" logo card (Playing Mantis, 1999) from a set of unknown number. It was inserted one per package of Johnny Lightning Racing Dreams die-cast toy cars; Card fronts show logos from various cereals. Unlike most Johnny Lightning cards the backs are not blank. In this subset, they feature box fronts and company milestones from various times in the product's history.

There are other "Racing Dreams" subsets as well but this is the only card I have of them. 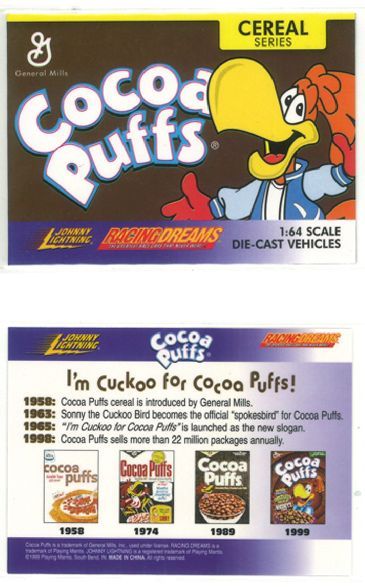 catskilleagle
This is an unnumbered card from the "X-Ray Dinosaurs" 4-card set (IBH Europe, 1997) - inserted one per package of Shreddies cereal in England. The cards measure 1 15/16 x 3 7/8 inches and have rounded corners. They are wider than usual but fit fine in a widevision-size sleeve.

Card fronts show artwork of a fleshed-out dinosaur but when the card is held up to a light, you can see a representation of its skeleton; card backs show the skeleton and provide some information about the animal. Here's the checklist: 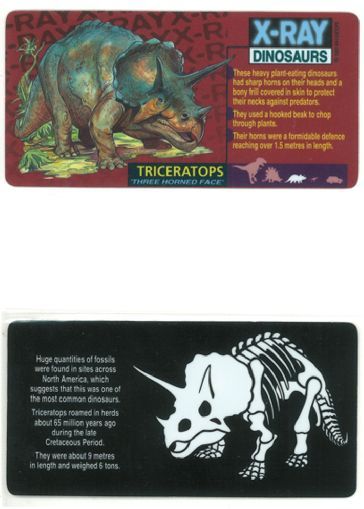 catskilleagle
Here is a promo for the "Remember?" card set with no date nor maker marked. No one seems to know how it was distributed. It's an odd size at 2 1/2 x 2 1/2 inches. The regular set has also been called "Remember When" and "Cold War Cuties" but it says "Remember?" on the back of this one in tiny lettering. The packs I've seen are titled "Remember?" and the cards are the same size and design as the promo. The photos on the fronts and backs are apparently reprints of 1950's-1960's pinup photos.

This is one of the oddball promos I got from a mail order dealer in the late 90's. I haven't seen one listed for sale in years. 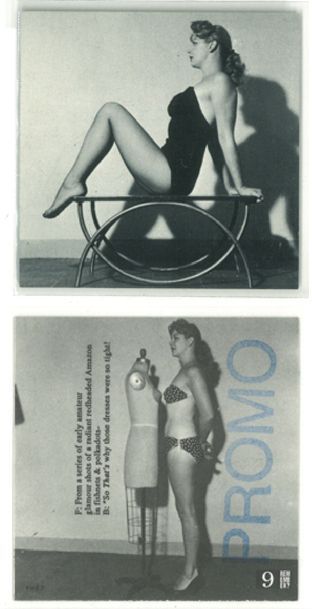 This message has been edited. Last edited by: catskilleagle,
catskilleagle
Here's a card from the "Saturday Evening Post" 12-card set (RC2 Brands, 2005) inserted one per package of "Johnny Lightning The Saturday Evening Post" die-cast-toy cars. The artwork on the fronts comes from vintage covers of the magazine. The cards measure 2 1/4 x 3 inches and have blank backs.

This series was made after the Playing Mantis toy company and the Johnny Lightning brand was sold to RC2 Corporation. 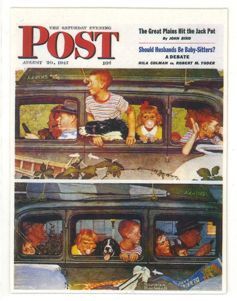 catskilleagle
From around 1992 to 1995 Republic Pictures released special VHS editions of its movies from the 1940's and 50's. Here are two cards that were inserted with the specially-marked 45th Anniversary VHS edition (1995) of the movie, "Rio Grande." The top card is a miniature reproduction of the movie poster and measures 3 7/8 x 5 11/16 inches. The bottom one is the same size and is a miniature reproduction of a lobby card.

David R
Anyone ever see these 2 promos for the unreleased 1994 Valiant Files set ? I have never seen them.

Are they actual cards or just images ?

I've never seen those. I wouldn't be surprised if they are real cards. Every once in a while, I find an oddball card that is part of or at least associated with a 1990's-2000's card series but we didn't see it back when the series was new.

quote:
Originally posted by David R:
Anyone ever see these 2 promos for the unreleased 1994 Valiant Files set ? I have never seen them.

Are they actual cards or just images ?

catskilleagle
Here's a Vivid Vision promo (Mello Smello/Lucasfilm Ltd. LLC., 2005). It's a 3D lenticular and the scan caught the card as it was transitioning between an image of Darth Vader and an image of the VividVision logo that seems to be floating in space (company logo and contact info also showing). The card measures 3 3/8 x 5 1/2 inches and has a blank back. It promotes a 3D poster and was given out only at the Star Wars Celebration 3 in Indianapolis in 2005. 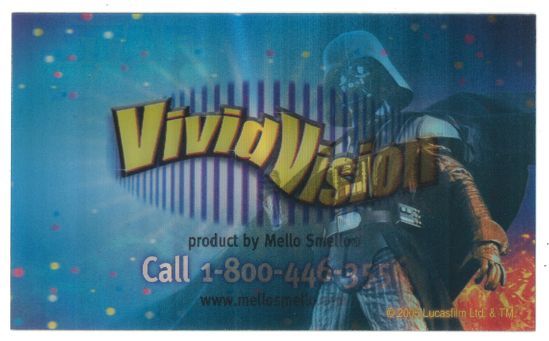 catskilleagle
Here's one from the 20-card "Olympic Champions" set (Kellogg Company, 1991) found in boxes of Corn Flakes cereal in the U.K. Each card came packaged in its own cello-pack and measures 2 1/4 x 3 inches. They fold open with a separate sliding card inside the back half and you can move the sliding card with a tab visible along the lower edge allowing you to select various years along with the Olympic records and record-holders that year. Card backs provide text on the Olympic events. 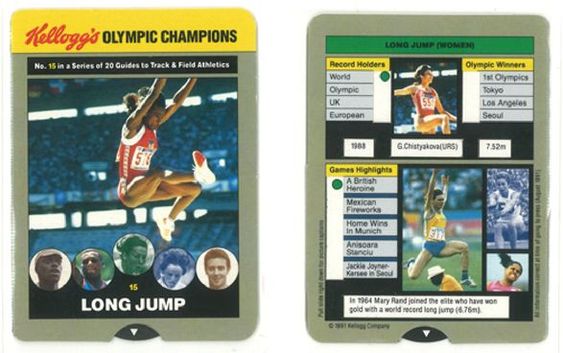 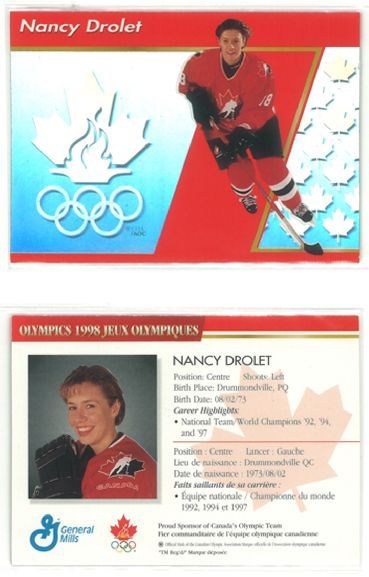 catskilleagle
Here's an apparently full set of Accolade promo cards (Accolade Inc., 1991). The cards are numbered on the back (1-7) and each measures 3 7/8 x 5 1/2 inches but they are connected as a 7-card perforated sheet totaling 5 1/2 x 23 1/4 inches. Each card promotes a video game with some released in 1991 - others were released in 1992. They were printed on thin card stock. Two of the card fronts say "Coming Soon" in the upper right corner. Card backs provide background information on the game and game tips.

catskilleagle
Here's the other version of the Accolade video game promo set noted above. The cards are the same size and are connected as a 6-card perforated sheet like the 7-card sheet also shown on this page but the cards titled, "The Duel: Test Drive II" and "The Games: Winter Challenge" do not say "Coming Soon" on the fronts and "The Duel" card has a different front image. It's unclear if it had a 7th card attached. I don't have this variant sheet but found images on the web. 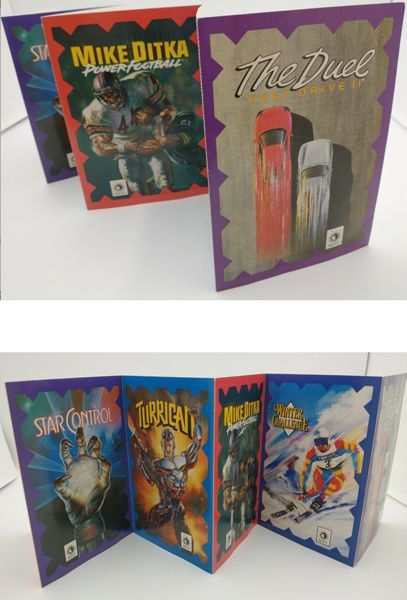 catskilleagle
This promo lenticular is titled, "Kodak 100 Years of Photography" (Kodak, undated). It's a tri-image lenticular measuring 2 3/4 x 2 3/4 inches. The image changes from an old camera to a digital model and then to another one, though the first one doesn't come out as clearly. The card has rounded corners and a blank back.

It doesn't appear that Kodak is still in the business of making lenticular products. 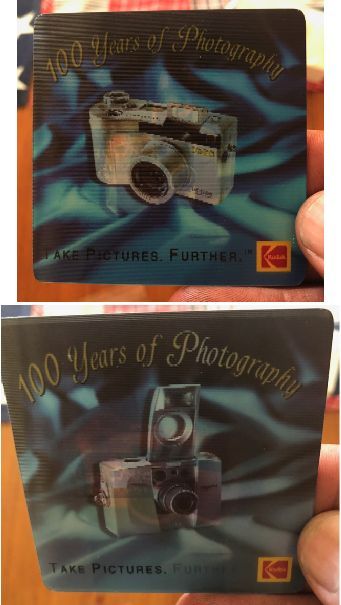 quote:
Originally posted by catskilleagle:
Here's one from the 20-card "Olympic Champions" set (Kellogg Company, 1991) found in boxes of Corn Flakes cereal in the U.K. Each card came packaged in its own cello-pack and measures 2 1/4 x 3 inches. They fold open with a separate sliding card inside the back half and you can move the sliding card with a tab visible along the lower edge allowing you to select various years along with the Olympic records and record-holders that year. Card backs provide text on the Olympic events.

I have the set with most of them still in the cellophane wrapping which surprised me as I remember I had to trade for them back in 1992. Although the cards show a date of 1991 on them they were not issued until April/May 1992 as details of them did not appear in Cartophilic Notes and News until the Jun/July issue. All 20 cards are based on Track and Field Athletics. Also they were issued with Kellogg's "Start" cereal as well as "Corn Flakes". A wall chart was also issued. Note that two of the cards do not show "All information correct at the time of going top press August 1991", these being nos 11 and 19.

I did a search on the web and came up with the following link, which shows images of the cards, cereal packets etc.

catskilleagle
Thanks for the extra info, John.

I forgot to check that website. It's a good one for cereal prizes/premiums.

I stumbled upon it while looking for something else a few years ago. It's possible there are other language variants. 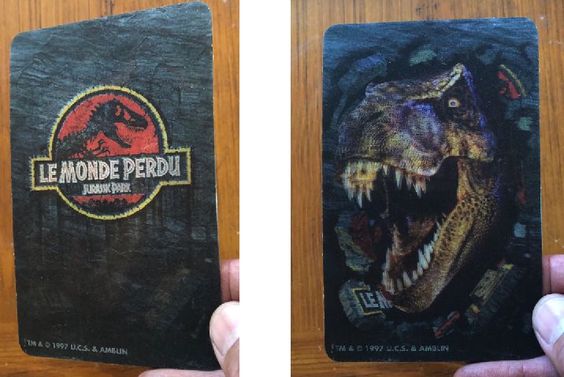 catskilleagle
This is a card from the "Uncle Toby's Super Series" (no year but was early 1997) and was inserted one per package of Uncle Toby's snack products in Australia. Card fronts show characters from the TV show, "Baywatch" and maybe other shows but I've seen just Baywatch cards. Card backs say whether you have won a discount voucher for CD's at Brashs stores as part of the "Baywatch and Win" competition (promotion ran to the end of April 1997). The cards have numbers on the back but they don't appear to be numbering for the cards. 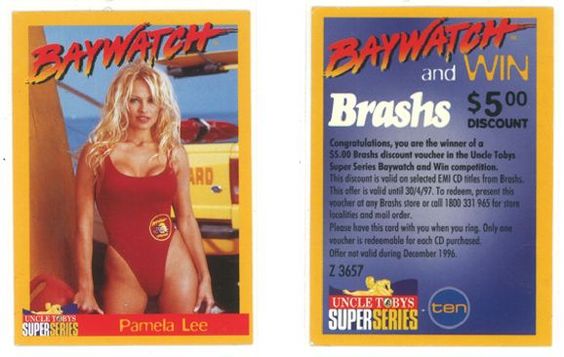 catskilleagle
I showed the Chester Cheetah card from a 1987 set (inserted in bags of Cheetos) that I have back in March. Here's another one from the set - might be three total. I don't see them often. 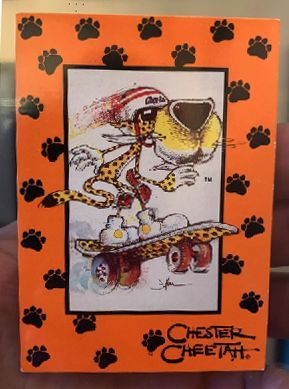