Non-Sport Update's Card Talk
UNLISTED PROMOS PICTURE GUIDE
This topic can be found at:
http://nonsportupdate.infopop.cc/eve/forums/a/tpc/f/274605453/m/8267062236
catskilleagle
UNLISTED PROMOS PICTURE GUIDE
Here's a lenticular promo card for "Das Grosse Krabbeln," which is how "A Bug's Life," the American animated movie, was translated as a title into German. It was glued to an unknown German magazine (or comic book) and it may be part of a larger set. It measures 2 x 2 5/8 inches and is blank-backed.

"Das Grosse Krabbeln" translates directly to "the big crawl." Maybe it's an idiom for "a bunch of bugs." 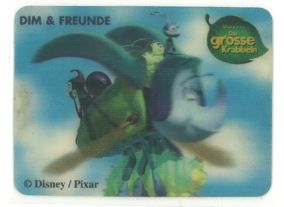 This message has been edited. Last edited by: catskilleagle,
catskilleagle
Here's an unnumbered promo card for model/actress, Tiffany J. Shepis (Choice Marketing, 1997). It was given out at the 1997 Dragon Con. The back has her filmography and contact info. I think I've seen this card for sale only a couple of times.

I think she's going for a warrior-princess look there. 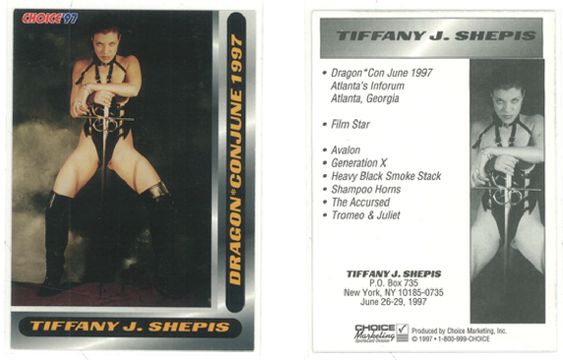 catskilleagle
Here's another 1997 promo card for model/actress Tiffany J. Shepis. I was told it was handed out at a show in Chicago. The card back has her contact info and a 1997 calendar. She appears to be going for an early 70's look. 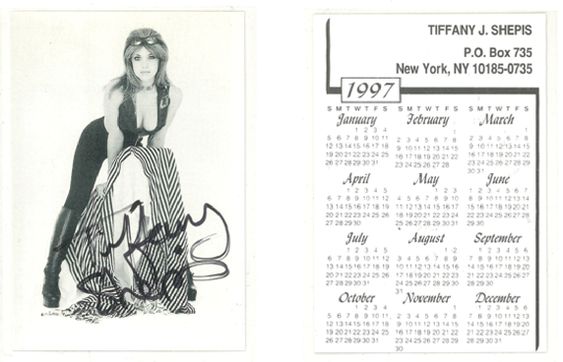 catskilleagle
Just when you thought I had run out of Tiffany J. Shepis promo cards, here's one more (Choice Marketing, 1997). It's possible it's part of a set of Cannes Film Festival promo cards but I haven't seen any others. 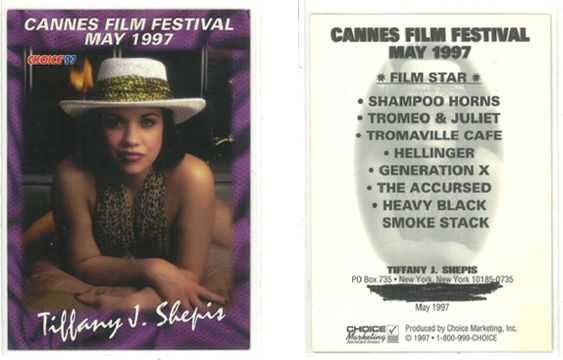 Sealed VHS tapes appear for sale occasionally. Look for one that has a round, red sticker that says, "Collectible Voltron Card Inside!" 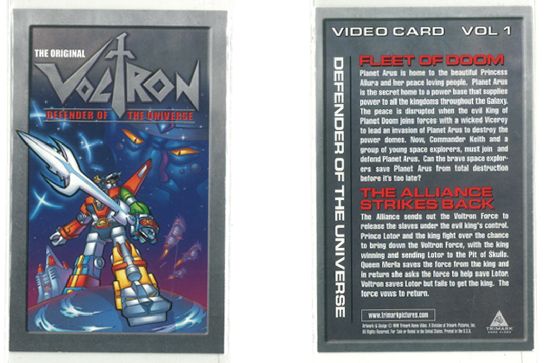 catskilleagle
This card promotes a sneak preview of the 2000 film, "American Psycho," at a theater in Canada. It measures 4 3/8 x 6 inches. To keep it from being mistaken as a preview ticket, text on the back points out that it's not a ticket. 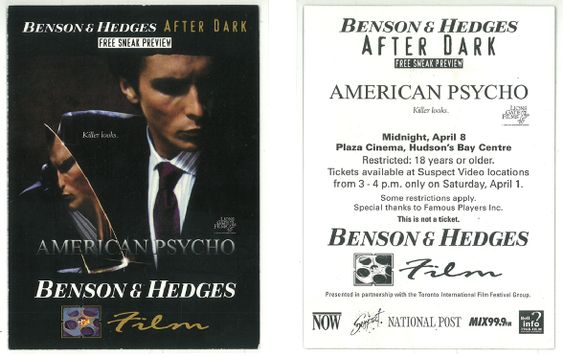 catskilleagle
This is card #3 from a 12-card artwork set which doesn't have a title written on the cards other than the company desgnation,"CJR2" (no year but said to be 1990) featuring early 20th century fighter planes from around the world. They were inserted one per box of Cracker Jack snacks and measure 1 5/16 x 1 3/4 inches. Many card collectors don't like the unusually small size but Cracker Jack prize collectors are used to it. 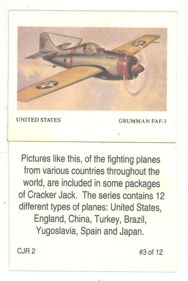 Bill Mullins
Those Crackerjack miniature planes use artwork from WW2 that originally appeared on Crackerjack cards of the era (E-151); Tydol/Veedol Planes (UO01); and Spaulding Krullers Planes (DC6 in Canada, D87 in US);This message has been edited. Last edited by: Bill Mullins,
catskilleagle
Thanks, Bill. I had wondered who did the art. I have a scan of the 6-card airplane set too and will try to post it later (misplaced at the moment).

Edit: I have a copy of "Cracker Jack Toys: The Complete, Unofficial Guide for Collectors" by Larry White (Schiffer Publishing Ltd., 1997) and it shows that card and its number (E-4050-20).

quote:
Originally posted by Bill Mullins:
Those Crackerjack miniature planes use artwork from WW2 that originally appeared on Crackerjack cards of the era (E-151); Tydol/Veedol Planes (UO01); and Spaulding Krullers Planes (DC6 in Canada, D87 in US);

This message has been edited. Last edited by: catskilleagle,
catskilleagle
Here's a promo card for "Coven 2: A Gallery Girls Book" (SQP, 2001), a pin-up/fantasy art book featuring the work of several artists. The artwork on the front of the card is by Tomas Giorello. The card measures 4 x 6 inches and was given out at shows. On the back it says "Coming soon from SQP Fantasy Art Books." 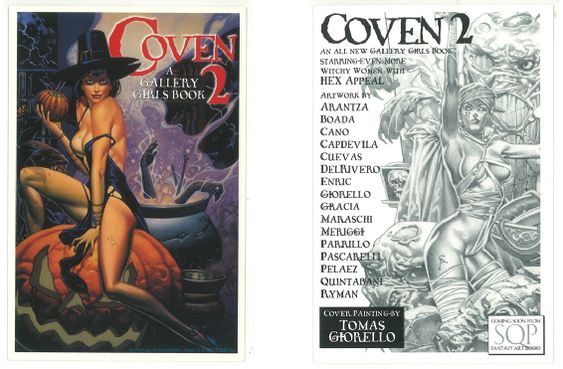 catskilleagle
This is card #1 from an untitled 6-card set designated as "CJR3" (no year but said to be 1990) featuring World War II warplanes of England's Royal Air Force. They were inserted one per box of Cracker Jack snacks and measure 1 5/16 x 1 3/4 inches. The artwork on the fronts was reprinted from cards issued by Cracker Jack in the 1940's. 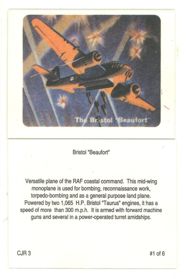 catskilleagle
Here's promo card for the "Boxing Champions" set (Victoria Gallery, 1991) which celebrates championship boxers not with photos but with artwork by Rob Larson. It measures 2 1/2 x 3 1/8 (62 x 79mm) and was distributed as a magazine insert in England. 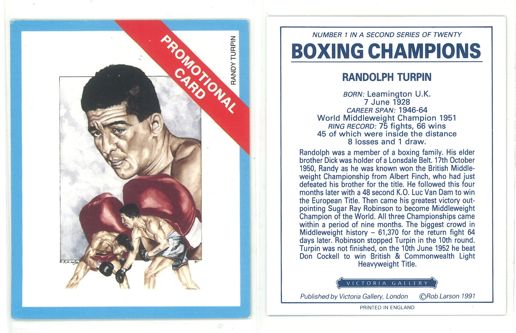 This message has been edited. Last edited by: catskilleagle,
catskilleagle
Here's a card similar to those drug-detecting dog cards (multiple sets) that the U.S. government gave out in the 90's. This one honors "Kodie," a rescue dog working with the ski patrol at Alpine Meadows, a ski resort at Lake Tahoe, California.

This is the only one I've seen but it may be part of a larger set. It was given out at a car show in San Jose, CA. 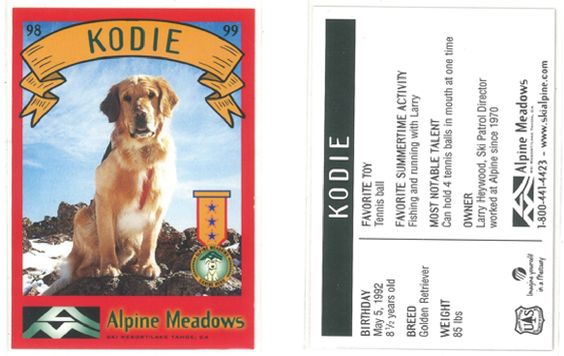 quote:
Originally posted by catskilleagle:
Here's a card similar to those drug-detecting dog cards (multiple sets) that the U.S. government gave out in the 90's.

Here are some more cards, doggy-style:

https://ccsoblog.org/2020/06/1...le-k9-trading-cards/
catskilleagle
This is a promo card for Dragon Booster, an animated TV show in Canada. It is covered in PCE2008 as serial-numbered out of 1000 on the back but this one is blank where the serial number is on that one. 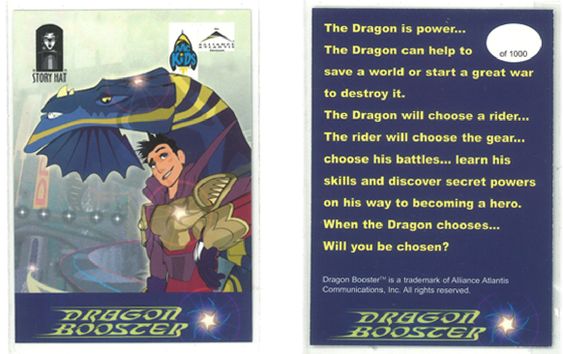 catskilleagle
This is card #2 from the 8-card Batman set (DC Comics Inc., 1989) which promotes the movie that had Michael Keaton as Batman and Jack Nicholson as the Joker. The cards were inserted one per box of Kellogg's cereals in Canada and they are triple-image lenticulars measuring 2 x 2 3/4 inches. Text on the back is in French and English. 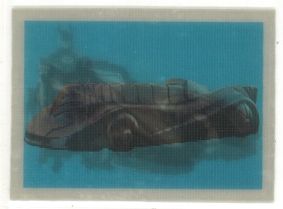 catskilleagle
Here's the #4 sticker from the 8-sticker set of Looney Tunes from 1996 - inserted one per box of Cracker Jacks. Each one has a silver prismatic background and measures 1 1/4 x 1 3/4 inches.

This is a sticker that actually has a printed back with the number given along with a quote from the character on the front and the Cracker Jack logo. 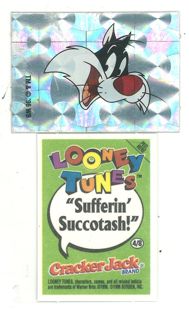 catskilleagle
Here is card #1 from the 10-card Disney Trading Card Stickers set (Disney, no year). They were inserted one per box of Incredible Berry Crunch cereal, a short-lived product from 2007. Each card was in its own cello-pack. The fronts are stickers but when you peeled them off, there were cards underneath. They are numbered on the front with each one promoting a different Disney franchise. 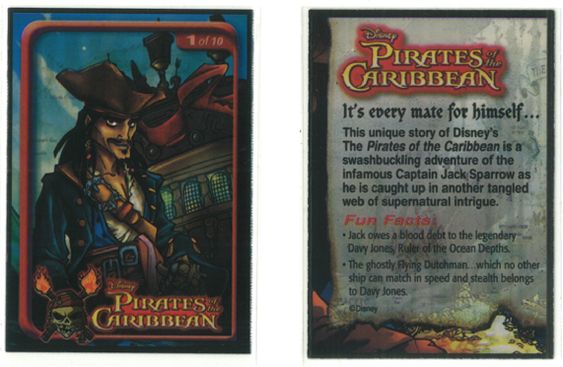 promoking
Catskill,
That disney card is awesome. Can you post the other cards from the set?

I have one of the other cards and have seen the set for sale maybe only a couple of times. It was always when I was looking for something else.

quote:
Originally posted by promoking:
Catskill,
That disney card is awesome. Can you post the other cards from the set?