Non-Sport Update's Card Talk
The Ones That Got Away...
This topic can be found at:
http://nonsportupdate.infopop.cc/eve/forums/a/tpc/f/274605453/m/6577082695
David R
The Ones That Got Away...
I haven't spent as much time on ebay as I use to, because my promo want list is pretty short at this point (all stuff between 1991 and 2000) and I rarely come across anything that I am missing.

However, a few days ago, one item popped up on ebay. The Marvel Universe IV 3 card red foil sheet of Doom 2099, Vulture 2099, and the third guy, from the 1994 Capitol con. This has been on my want list forever. Unfortunately, I missed it by a day, and someone else picked it up for $ 100. As many of you know, there are 3 uncut sheets of the 9 foil cards (3 cards per sheet). I have had the other two for many years, but not the one with Doom on it.

Two others that I missed on ebay over the past few years (saw the auctions after the fact):

The Earth Tribe 5 card set from the 2000 San Diego Comic Con. Promotes some comic book. I even contacted the artist afterwards, but he didn't have any left

You occasionally see these show up on ebay, but never the number that I am missing.
Graham
Hey, David. Email me (addy in my profile). Title it 'Blue'.
David R
Email on the way
Ace of Hearts
I'm still working on these as well. I have bought cards that have 2 different size stamp on the back.
They are identical to the regular set so anyone could make a stamp.
Ace
promoking
If I'm not mistaken and if my 50 year old eyes are not deceiving me, these are factory stamped and not "rubber stamped". So they're probably harder to counterfeit. I am the crazy one trying to complete a set of each! the large and the small print. I'm missing a few cards from each set. Wish me luck.

https://www.ebay.com/itm/Marve...rksid=p2047675.l2557
catskilleagle
Yeah, it's tough to watch for everything you're looking for every week. I didn't see it either. It got a lot of action, though. You might not have won it anyway but it feels like you did something when you get in a bid or two on something you want.

That one bidder thought he had it even with that other one bidding it up in small jumps several times late. Then, someone new sniped it at the end with a much higher bid. Didn't the last one that sold go for about $100 a couple of years ago? I don't have a note on that.

quote:
Originally posted by David R:
This has been on my want list for many years, but I did not see it. It sold on ebay last month for $ 152. Darn it !

David R
I never could figure out these promo sheets. There are 3 different ones, and each are numbered to 1200, I believe.

However, you NEVER see any of these show up on ebay. Maybe once every 4 or 5 years. I picked up the other 2 back in the early 2000s through a private sale (not ebay)

So if 3600 of these exist, how come NONE of them ever show up for sale ? Where are they ???
catskilleagle
Someone might have tossed a bunch of them in the garbage and there might still be someone who has another lot of them in storage somewhere. Some people probably tried to extract the panel from the plastic case so they could put it in a binder. I've seen a few cards that were sealed in similar cases but were later removed and then put up for sale (the Mighty Man promo from Arena magazine with the gold ink and the Savage Dragon gold lettering card from Collector's Sportslook magazine). However, I tend to think a lot of them are still sealed and in the hands of Marvel comic and card collectors' who got them back then.

Every once in a while, a small lot of rarely-seen cards comes up for sale. Maybe 15 years ago, an Ebay seller put up several Ultraverse P0 "Warstrike" promos with the Capitol City logo on the back. I got one before they were all snapped up. It wasn't a case of someone hoarding them for just the right moment to cash in. They went for about $8 each. I think a HWDC version of that card was up for auction a couple of years ago but I haven't seen the Capitol City card for sale in recent years.

quote:
Originally posted by David R:
I never could figure out these promo sheets. There are 3 different ones, and each are numbered to 1200, I believe.

However, you NEVER see any of these show up on ebay. Maybe once every 4 or 5 years. I picked up the other 2 back in the early 2000s through a private sale (not ebay)

piko
When i started to collect Promo cards about 1983 or 4. The dealer told me that before I came along most of his promos including box cards went into the bin. All his customers only wanted base or insert cards.
But i cannot see these promos being binned as they are sealed items and would of been collected.
So it would seem that whoever has them is not prepared, or dose not want to sell, regarding scarcity or price.
Raven
I don't know anything about these promos, but the seller says they were released at a sales conference. The stuff you pick up at sales conferences is often discarded straight away by the attendees or winds up in a box in the garage. If supplies are left over they just might get dumped by the organizers rather than get carted back.

If there were 3600 of them and they show up so rarely after 26 years, I think the majority must have been destroyed and the people who still have them don't know they are valuable to promo collectors. A person who does not know the market would probably not think very much of them and uncut sheets, even in frames, are often seen by card collectors as too irregular for easy storage.

The simple answer is that very few people thought they were worth enough to even try and sell them. Makes more sense than that someone cornered the supply 26 years ago and is waiting for the right price.

David R
There are so many mysteries of card collecting that will never be solved.

If so many exist, why have I never seen any on ebay in 20 years ? I have 1 of each, which I bought out of someone's collection, maybe 15 years ago.
Tommy C
Not sure if this was mentioned elsewhere.

That 1993 Marvel sheet which David mentioned up above, showed up on ebay in mid-Feb, and sold for around $ 100.

Another one of those infamous 1993 Marvel sheets (not the same one, there are 3 different ones total) was on ebay in mid-February, and that also sold for a few hundred dollars.

These are those red foil sheets, the uncut versions of the 9 foil chase cards (3 different cards per sheet), most of which come in those sealed, plastic holders, from the Capitol Con that year.
promoking
So I have 3 different types of these promos. First, there are these uncut sheets which are very difficult to find. Then you have the individual promos with the stickers on the back but those also exist with just a blank back and I believe the blank back ones may be the hardest of all to find. I don't have all 9 of the blank back ones and not for a lack of trying to find them over the last 20+ years. Rare suckers!

JOHN LEVITT
I have some images of the uncut sheets that David R has asked me to upload however I am having a problem in that Postimage will not let me upload any new images due to maintenance, Is anyone else that uses Postimage having the same problem.

I have 2 of the 3 sheets (I missed the auction last month, darn !), 8 of the 9 cards with the stickers on the backs (I have never seen the Punisher 2099 one), and a few of the blank backed ones.

I think the blank backed ones may have been cut from sheets, and therefore I don't really chase after those, as I don't think they are legit. I have seen some of these go for CRAZY prices, like $ 100 !

On the sheets, I have seen them in the plastic holders, and some loose, perhaps removed ? 1 of the 2 auctions last month was a sheet that was NOT in the plastic holder.
promoking
For sure, the uncut ones came exclusively in the Plexiglass holders but a lot of people have taken them out. I don't know the provenance of the blank back ones but I still buy them whenever/wherever I find them. Does anyone have any info?

catskilleagle
David asked me if I would try to get the photos up after John had some trouble. Here are two of three. All three have the same back except for the serial-number. 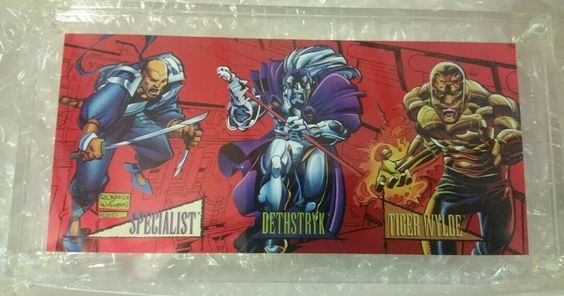 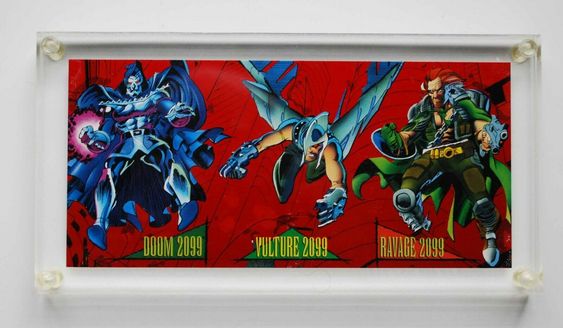 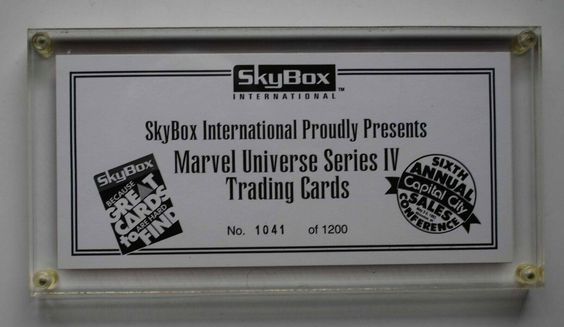 I don't know the provenance either but it seems they were cut from the same sheets as the ones with the stickers. I would assume not all the samples got the sticker so not all the ones given out would have had the sticker either.

quote:
Originally posted by promoking:
For sure, the uncut ones came exclusively in the Plexiglass holders but a lot of people have taken them out. I don't know the provenance of the blank back ones but I still buy them whenever/wherever I find them. Does anyone have any info?