Non-Sport Update's Card Talk
Non-Sports VS Sports
This topic can be found at:
http://nonsportupdate.infopop.cc/eve/forums/a/tpc/f/274605453/m/4487026786
catskilleagle
Non-Sports VS Sports
Here's one from from the 16-card "NSW RL" set (The Continuity Group, 1992). It was given out by newsagents in Australia. Each one is a dual-image lenticular with the image changing from a photo of a rugby team logo to a game action photo. The card backs provide background information on one of the teams in the league. They were selling for $7 or 8 each a few years ago. I don't know what they are going for now.

Rugby is one of those sports that has trading cards including promos like this one but there doesn't appear to be a guide documenting them. I think Todd had considered including them in PCE (and there may be one listed in PCE2008) but has since decided against it. I think this could be one of those borderline sports/non-sports promos because of the half emphasis on the logos. I bought this one because the Cronulla-Sutherland mascot is a shark and it's a cool logo. 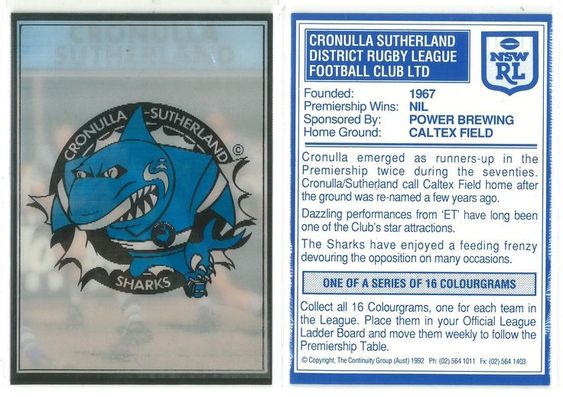 catskilleagle
This card has a front that looks like a Jim Kelly football card, and in fact, there are two similar Skybox football cards but they have different backs. The back of this one has a logo for "The Sports City Grill," a restaurant Kelly opened and owned for three years. The card was given to VIP guests at the grand opening party in 1993.

One of the other cards shows Kelly in the same photo but holding a wrapped present instead of a football and the back has a Christmas message. The third card is either another promo or a special chase card. It has "Skybox" in foil on the front, it's numbered S4 on the back, and the rest of the back is also different. The "Skybox" logo on the front of the restaurant promo does not have the foil stamping. 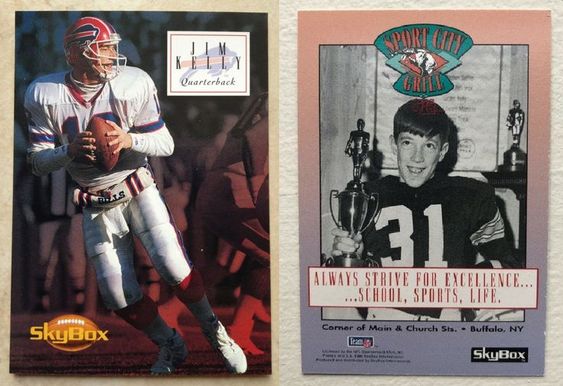