Non-Sport Update's Card Talk
SHOULD i OPEN IT OR NOT??
This topic can be found at:
http://nonsportupdate.infopop.cc/eve/forums/a/tpc/f/274605453/m/3497082496
cardscout182
SHOULD i OPEN IT OR NOT??
So, today I received a few awesome promos that I'd been chasing for a looooong time and the Bambi 55th Anniversary promos from 1997, ( page 15 of 2008 PCE) came in a cello pack and was wondering what the other promo collectors thought about the idea of open it or leave it wrapped?
pcetodd
I open everything but then again I want to see and document whats in there. I also suspect the cheap wrapping may deteroate over time and affect the cards. Plus I've never understood buying something and never opening it unless you intent was to resell.
wolfie
If you want it to keep open it.

If you want it to sell it keep it sealed.

cardscout182
Thanks for the input Todd and Wolfie... No, definitely no re-selling them so it looks like I'll be opening them, along with the other 100 or so packs I have... Might find some hidden gems in there and some spare cello packs

quote:
Originally posted by cardscout182:
So, today I received a few awesome promos that I'd been chasing for a looooong time and the Bambi 55th Anniversary promos from 1997, ( page 15 of 2008 PCE) came in a cello pack and was wondering what the other promo collectors thought about the idea of open it or leave it wrapped?

That's a very personal choice but I vote to open. For the first 10 years of collecting promos, I didn't open a single pack. Then I decided to open them all as well as all the new ones I would acquire. I am very happy to have made that decision for three reasons. First, I thoroughly enjoy scrutinizing every detail of each card. Secondly, I always search for errors, nuances etc.. for each card I get and lastly, In the past, I remember buying cards that I didn't recognize only to realize later that it was one of the "hidden" cards in a sealed pack I already owned. Open away my friend!

catskilleagle
That's a good pick-up not always available. You should be able to find another one if you want an unopened pack of that one.

Yeah, I tend to open a promo pack unless it's something very unusual. However, on top of Albert's reasons there's also the possibility that the cards might stick together over time. I have a promo pack that has a National Lampoon promo showing on top and a Horror Stories on the bottom (both from 21st Century Archives). It might have a mix of promos from the company or it might be an oddball show promo pack with other company promos. I might open it at some point.

quote:
Originally posted by cardscout182:
So, today I received a few awesome promos that I'd been chasing for a looooong time and the Bambi 55th Anniversary promos from 1997, ( page 15 of 2008 PCE) came in a cello pack and was wondering what the other promo collectors thought about the idea of open it or leave it wrapped?

cardaddict
Speaking (or typing) of sealed, are any of these something to jump up and down about, or are they just a bunch of ho-hummers? 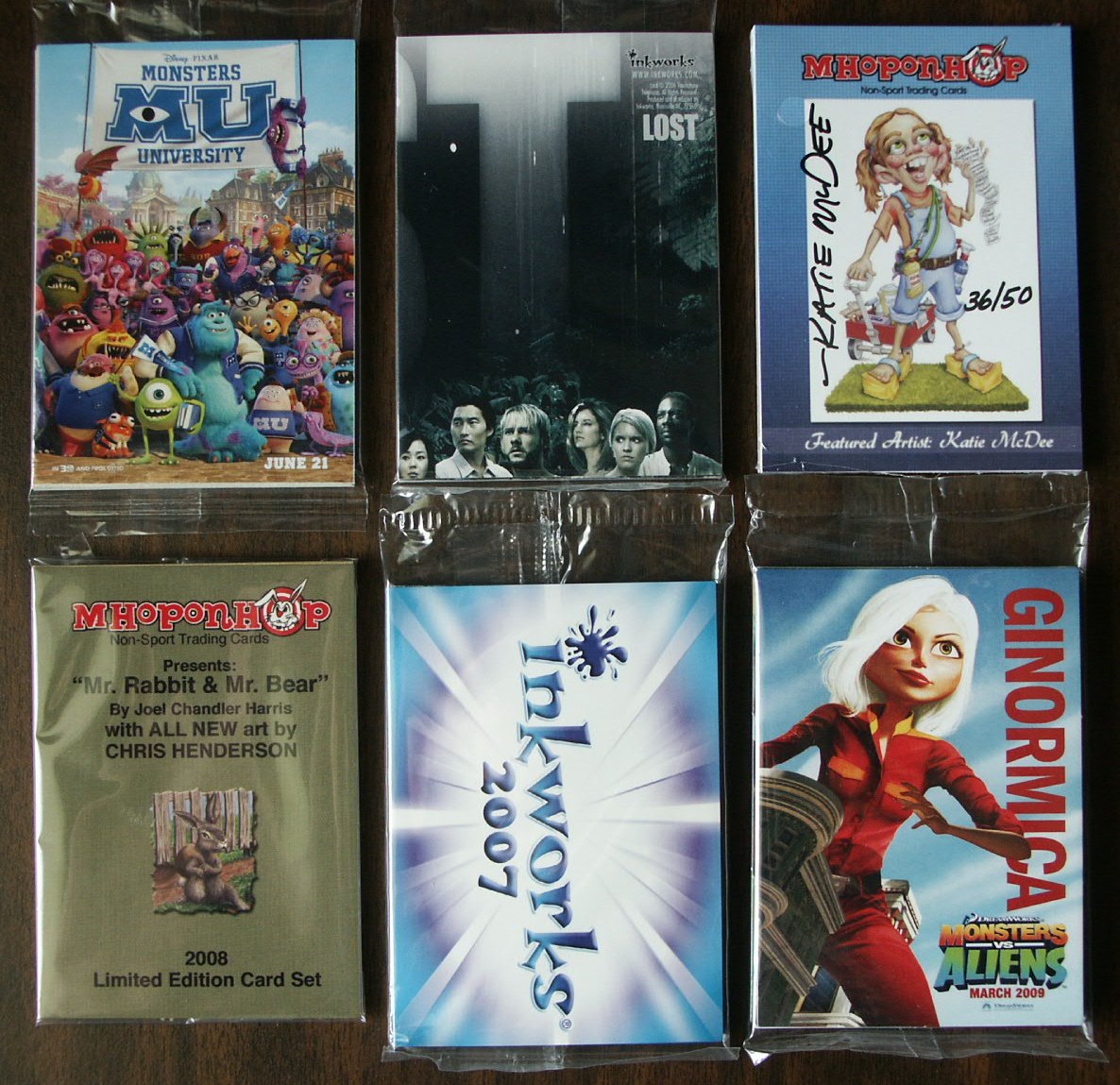 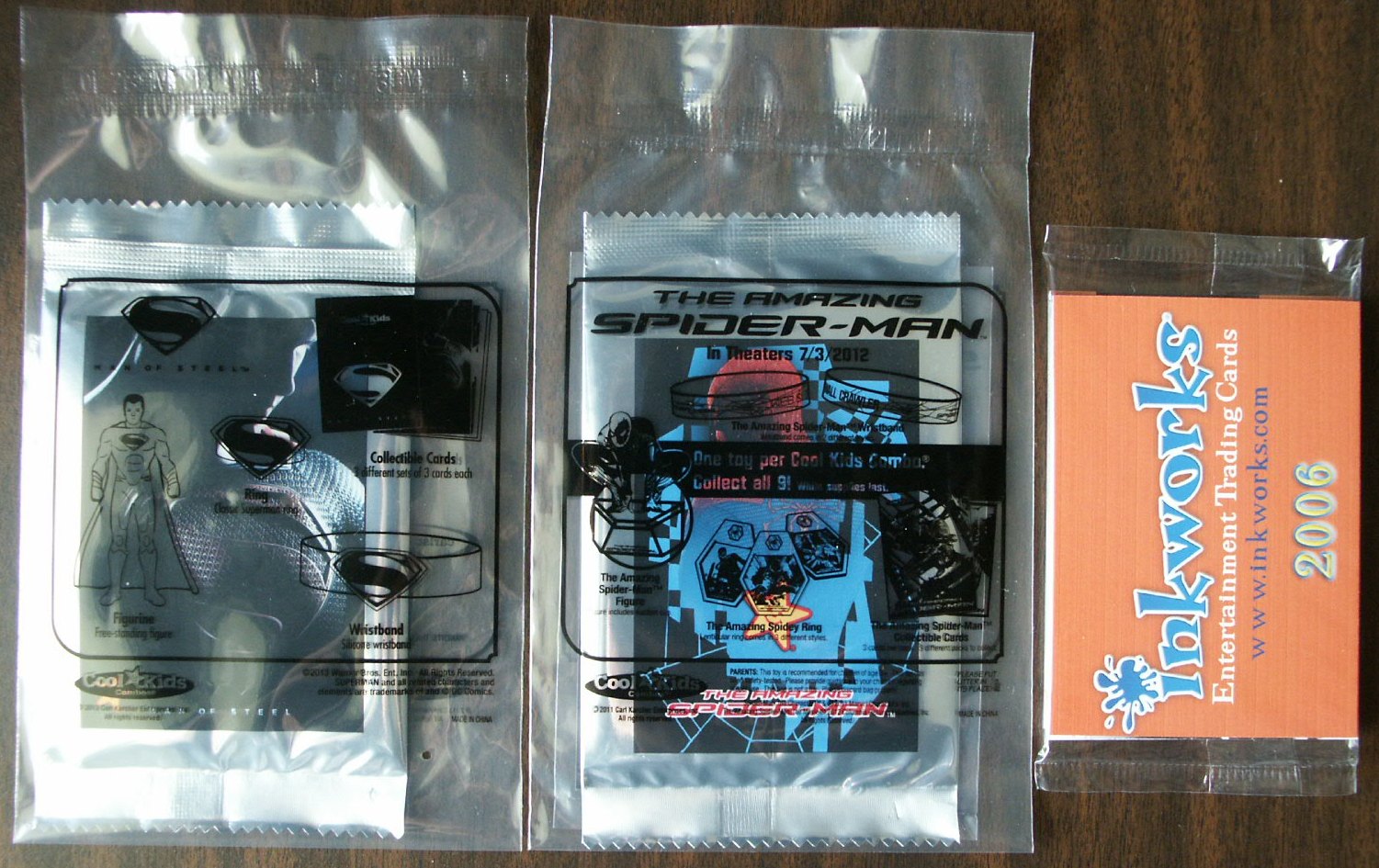 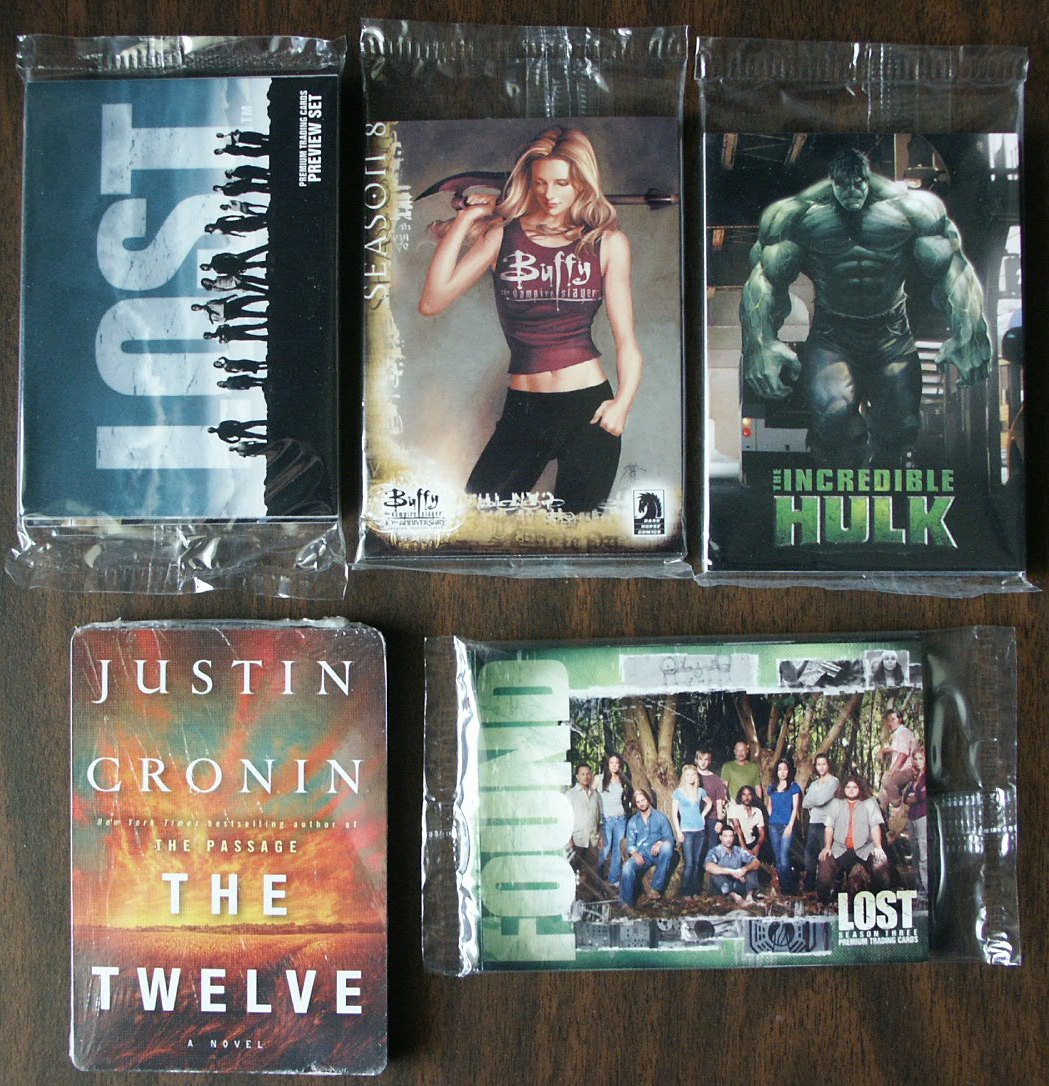 mykdude
Because most collectors keep em sealed, opening it makes it more rare!!
Raven
I don't think the answer to this question ever changes regardless of whether you are talking about cards or toys or comics or - insert item here - . It all just depends on why you have it in the first place.

If it is for your collection because you are interested in it and want to see it, open the thing up.

If you bought it strictly for investment or you fully expect to sell it at some point, keep it shut.

If its something you just picked up and have no interest in, keep it shut. You just might find someone who wants it before you throw it away.

And if its something that you really want, but you either can't get over that mint in the box mentality or you think it may be worth a boat someday, you buy two. One to open and one to admire through the plastic on the garage shelf.

pcetodd
Cardaddict, I see a few to get giddy over.
Zane DeVan

quote:
Originally posted by cardaddict:
Speaking (or typing) of sealed, are any of these something to jump up and down about, or are they just a bunch of ho-hummers?

There are some good ones here, the monsters university cards are very desirable. So are the guardians of the galaxy cards. Please let me know if any of these are for trade or sale
catskilleagle
Hi Cardaddict,

I think that first pack is the Monsters University Projectionist set. I have read that there is a 10-card version and an 11-card version with the latter being rarer/more valuable.

I don't know what that second pack is and can't read what it says. It might be one of those preview packs you could buy before the set was released.

That Mhoponhop pack might be something interesting even if it isn't worth more than $10 though that might have been part of some special promotion if it's a sealed pack. That top card is a promo. Any pack with a signed and numbered card by the artist is worth having.

That Mhoponhop "Mr. Rabbit and Mr. Bear" pack was an early promo set. You can still get that from the company and find it online.

The Inkworks 2006 and 2007 promo packs were given out at SDCC. If you keep your eyes open, you can find them cheap by themselves or as part of a lot.

The Monsters vs. Aliens is semi-oddball. You can find it online.

The Cool Kids "Spider-Man" and Superman cards are nice extras to have but not particularly valuable.

I don't know what that Lost Preview pack next to the Buffy pack goes for. The Buffy pack is listed in PCE2008 and described as a promo. I was told it was something Dark Horse sold. In any case you can find it cheaply online.

If that Incredible Hulk pack has six cards in it and by RittenHouse Archives (2008), it was one of 999 sets sold as a movie preview. It might be something to hold onto. It went for about $20 maybe 4-5 years ago. I don't know the current going rate.

That Justin Cronin "The Twelve" pack is certainly an oddball (and that has trade value), but unless you're into the books, it's probably not worth more than $1-2 card.

The Lost Season Three pack is something you can find online if you want it.

The Guardians of the Galaxy cards are part of a 10-card set. If you were a member of AMC's Stubbs program, and bought tickets to see the movie during the promotion window, you got three of the cards for free. I don't know the market on these cards. I have seen a card go for over $10 and have seen others go unsold at $5 each.

JessThis message has been edited. Last edited by: catskilleagle,
piko
To Card Addict I would be interested in some of these sealed Packs if for trade or sale dont know much about them the hulk should have a number of 999 on the back Buffy NSU $17
Lost Preview $20 not sure about the others but I would be interested in a number of them
Thanks
Piko
cardaddict
Thanks for all the input(s).
At the moment I do not wish to trade any of these, although I do have two of the MONSTERS UNIVERSITY packs and a bunch of the Hardee's packs. 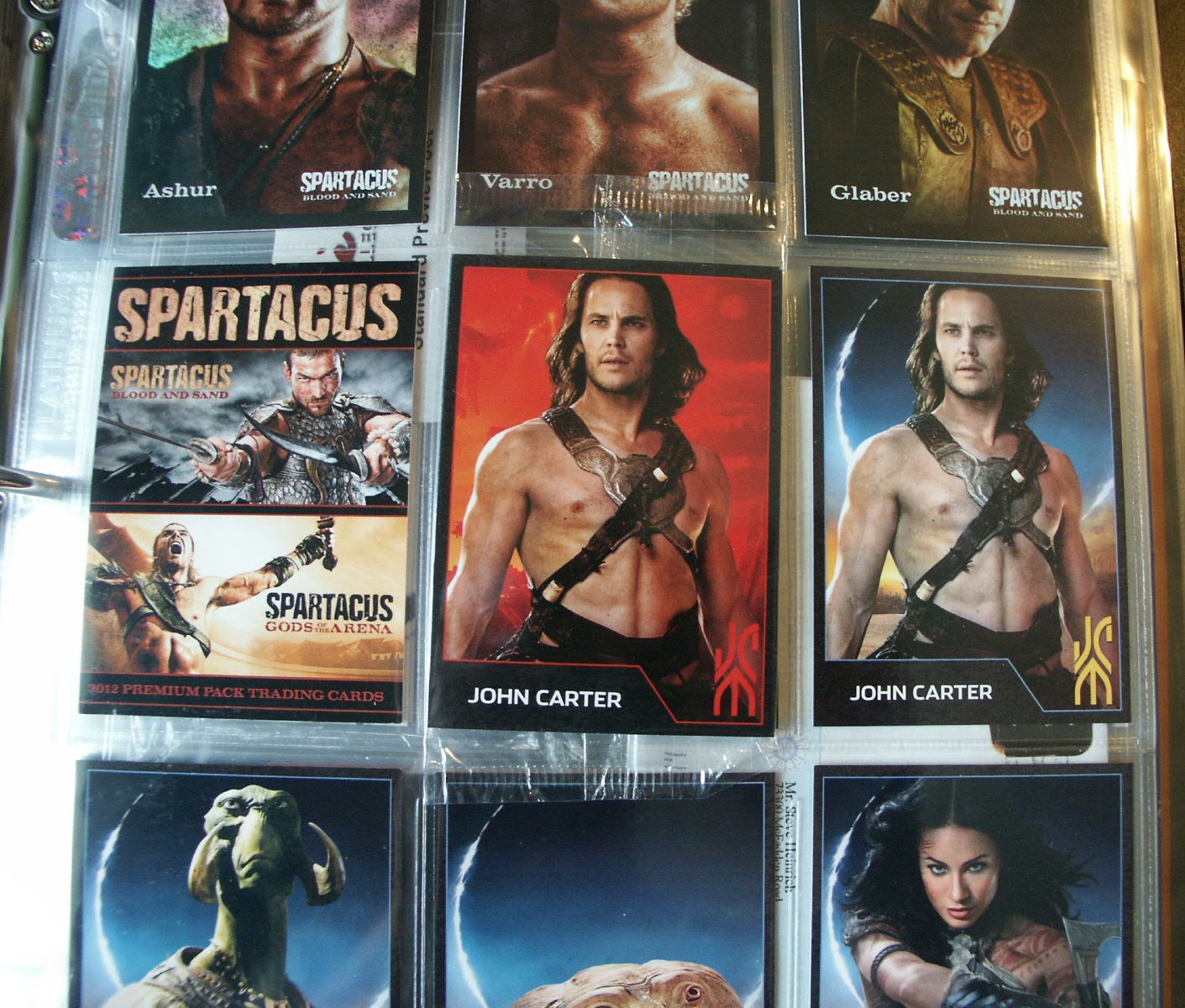 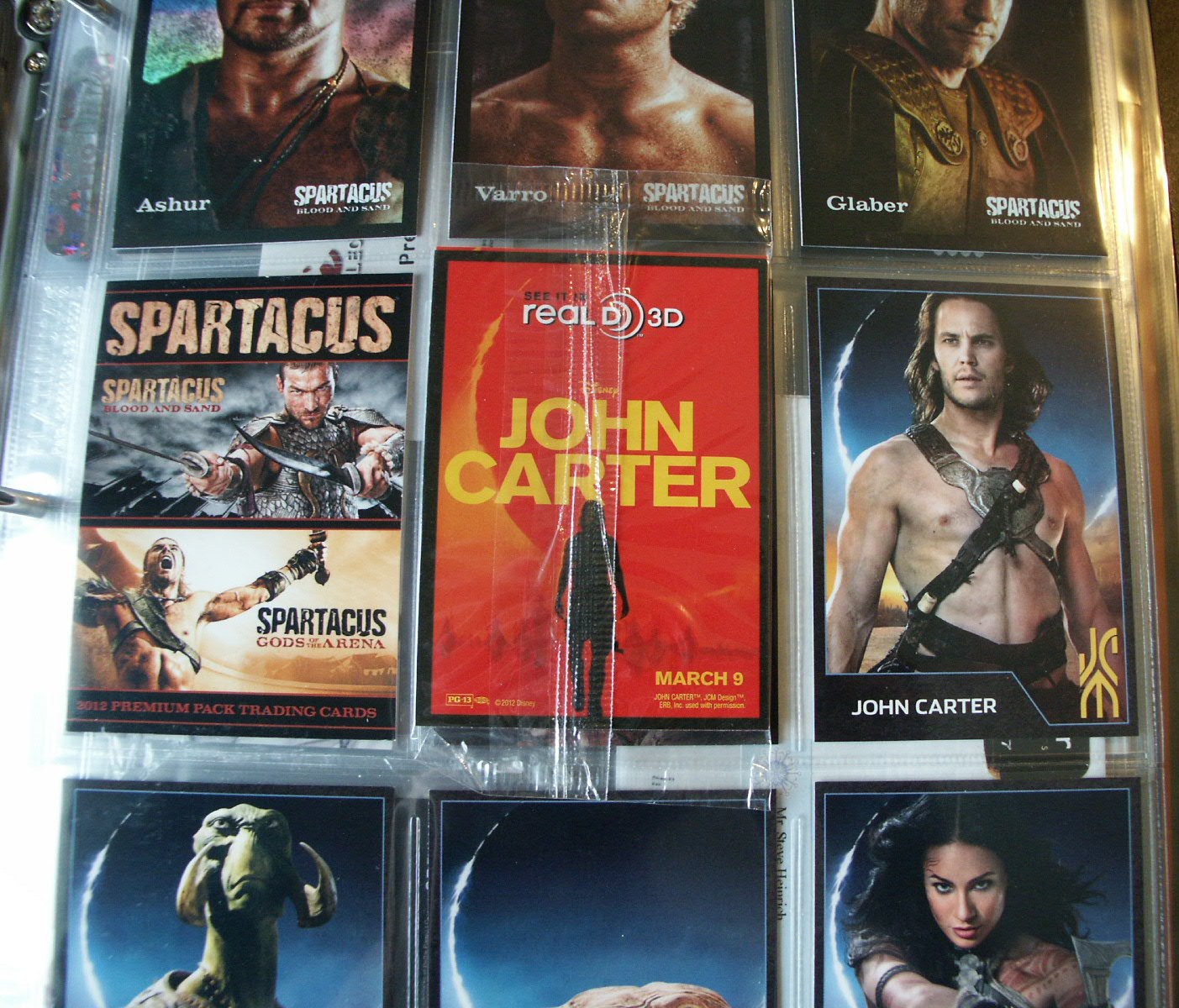 cardscout182
Very cool pics there Cardaddict, so happy you get, or used to get promo card packs when you went to see a movie, wish we had that here, oh well really nice to see