Non-Sport Update's Card Talk
Dragon Ball Z card
This topic can be found at:
http://nonsportupdate.infopop.cc/eve/forums/a/tpc/f/274605453/m/2577022296
catskilleagle
Dragon Ball Z card
Does anyone know about this card? It is dated 1995 and numbered "C7." The front has a holochrome background and lettering. Where it looks yellow in the scan, you see that refractor effect when you're looking at the actual card.

It was given out in a cello-pack at a San Diego Comic-Con but it was at least two years later which is weird. There was a C7 chase card for the 1995 Dragon Ball Z card set (Bird Studio/Shueisha Toei Animation) but I think that was a chromium card and perhaps had a different back so this may be a promo variant.

If someone knows about that set, please let me know if the C7 card looks like this one and whether its chromium or holochrome. 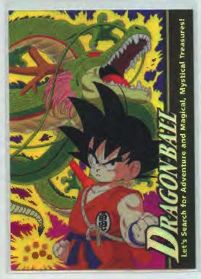 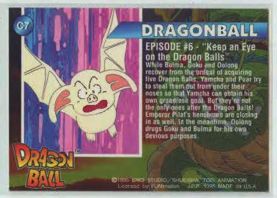