Over the years I have picked up many small stuffed dolls from the food chains, mainly McDonald's and Taco Bell. I'm talking about the Sesame Street babies, Toy Story characters, Taco Bell talking dogs, and probably a few other lines I don't remember right this minute. They get put in boxes and left for 20 - 30 years apparently.

Just today I came across three 1988 Sesame Street babies, unopened in mint condition. So I looked them up on eBay.

Many individual dolls are under $10. The Miss Piggy, Kermit and Fozzie babies are really cute. Hard to believe they cost about the same as the meal I bought 31 years ago. So here's my questions.

Does anyone still consider these types of fast food collections to be collectible? Does anyone know of toy lines in the Happy Meals or Taco Bell or other food chain movie promotions that are truly worth something now?

It's kind of depressing to find out years later that the things we packed away have been saved for no good reason.
Don Norton
Most things like this never seem to takeoff in value, collect them because you like them. There was in the Chicago area several years ago a McDonald's Happy Meal toy show, and it also included other toys such as from Burger King and Arbys. Most of the stuff was pretty reasonable, but a few items like the earliest Happy Meal toys, were valuable.
I have several of the Star Wars toys that were available at Pizza Hut, KFC and Taco Bell many years ago, still in the original boxes, hopefully these will be worth something someday. Also have a series of cards and albums of birds and animals that were offered by Burger King in the 1980's.
wolfie

It's kind of depressing to find out years later that the things we packed away have been saved for no good reason.

This applies to a lot of the hobby releases of cards also. It's scary to go through completed auctions and see cards selling for next to nothing compared to how much they were when they came out.

They are a half dozen different plastic games, shaped like bubble domes, maybe 2 inches in size across. Clear plastic covers/shells that you can't remove. I recall a ring toss game, and maybe one where you move it around, for the balls to go into the holes.

Probably worth nothing !
Freddy
Like Don above, I too have collected these items. I have sold off most of my Burger King Toy Story 1 plush toys, and Star Trek 2009 glasses, and most of those old Taco Bell Star Wars toys, from way back in the mid-1990s. Some sell pretty good but most don't. 'Back in the day' I just collected because I just liked the line being offered, but 30 years later, these items are just stuck in storage, so I toss them up on eBay.

Tommy C
I remember the Empire Strikes Back beverage glasses that Burger King had around 1980.
Kennywood
Back in the day, Burger King also offered 3-card strips of Star Wars cards 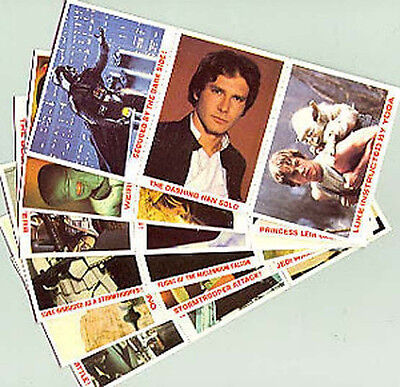 piko
like most of you I collected the McDonalds toys I have hundreds but they hold no value .
Even the first McDonalds toys have very little value , and they were sold in what was the first McD shop in new Zealand ,and this being a small country you would think that they would hold a value but no.
Some dealers have a high value put on them but no one will buy them.
Some of the earlier Burger King toys etc do hold their value but are very slow sellers
One thing that cannot be disputed is that all these items are a throw away item for kids they only have a one or two day attention span then out .
They are not for adults who have faithfully collected and stored these items in pristine condition hoping one day to make some money out of them (wich i did) Even though countries have different toys essentialy there are most of them the same thus there being millions out there ,And this is what I think is holding the prices back the vast ammount of of toys produced for each issue ,I think that every on who is into these premium issues be they Petrol Co , Supermarket etc issues have what they want and there are no more collectors are taking their place .
At the moment there is only one person advertising for McD toys in New Zealand and it would cost me more to ship them than he would pay.
Although I could walk into a McD restaurant and they would sell me a Happy Meal toy for $1
so that was not too bad .
But unfortunately we got on the wrong boat but be thankful it was not an expensive ticket.
Raven

quote:
Originally posted by piko:
They are not for adults who have faithfully collected and stored these items in pristine condition hoping one day to make some money out of them (wich i did) Even though countries have different toys essentialy there are most of them the same thus there being millions out there ,And this is what I think is holding the prices back the vast ammount of of toys produced for each issue.

Yes, there seems to be no shortage of these toys now, but at the time they could be hard to get them all. I can remember running around trying to collect the whole Toy Story 1 Burger King dolls. There was no internet back then, you had to go from restaurant to restaurant and they always had the wrong ones.

It was frustrating and fun and you didn't realize that the production was so high because you could only find what was in your immediate area. That is the big difference in the pre-internet years to post 2000 and it really applies to all types of collectibles.

Things that were produced as 5,000 and 10,000 limited editions, which are laughed at now, were not just seen as rare then, they truly were rare. You couldn't find them, so of course they had value when the demand in your area couldn't be satisfied. Prices held, many went up, collectors thought they had a good thing going.

Then the internet came along and the entire game changed. Suddenly all the things you couldn't find were right there and nobody wanted them. That's when the race to the bottom started and all the hobbies fell to Earth, but some really got slammed.

I always only collected what I liked, but it still is discouraging to remember how much time and effort was put into getting stuff that is regarded as just so much clutter now.

Tommy C
I remember in the late 1990s running around to multiple McDonalds to get all of the pieces of Inspector Gadget (the Matthew Broderick movie version). Each part was separate-- left arm, left leg, torso, each arm, etc.-- and it was tough to find all 6 or 7 pieces, whatever it was. Looking back, I question WHY did I do that ?
catskilleagle
In the 90's it seemed like a no-brainer to pick up anything Star Wars or Simpsons or Hot Wheels but when lots of people are sitting on a quantity, there's no demand later. With so much out there, collectors can't get good money when they do start unloading their extras or everything they have. It's tough to get $20 for a set of meal toys. Even those from restaurants lesser-known for them like Arby's or Dairy Queen are slow sellers. As we've seen with cards, relative rarity doesn't always increase value.

There was a 90's Dairy Queen promotion with animal cards that would've reeled me into buying food there but I didn't hear about it until years later. I saw a set on "the bay" last year but thought about it too long. It went to someone else for over $30.

P.S. In the late 80's, Union 76 gas stations gave out Oakland A's pins when you filled your tank (or bought 8 gallons worth?). I went there until the promotion ran out and built a few sets with extras, thinking I would have something to sell or trade later. A friend did the same but we both noticed about ten years ago that you could get any of those pins for about a buck each at the flea market when they did sell at all (a couple of sellers had a bowl full of them).
Tommy C
Back in the 1990s, there were 2 or 3 Peanuts (Charlie Brown) VHS tapes that were exclusive to Shell gas stations

At least one of them, "You're in the Super Bowl, Charlie Brown", shown on TV in Jan 1994, I believe, is one of the 4 (of 45 or so) Peanuts specials that to date, has never been released on DVD, just VHS. Probably due to clearance issues with the NFL.
catskilleagle
There's a lot of stuff on VHS that has never been released on DVD. Sometimes, the company went out of business in that late 90's-early 2000's timeframe and there was no big demand for the content afterward. Sometimes with a movie or TV show, they can't make a deal because of the soundtrack, each song requiring a deal to be worked out.

I'm not sure any of the old "Winnie the Pooh" TV specials have ever been released on DVD. I was looking for those when my nieces were small but didn't find one.

quote:
Originally posted by Tommy C:
Back in the 1990s, there were 2 or 3 Peanuts (Charlie Brown) VHS tapes that were exclusive to Shell gas stations

At least one of them, "You're in the Super Bowl, Charlie Brown", shown on TV in Jan 1994, I believe, is one of the 4 (of 45 or so) Peanuts specials that to date, has never been released on DVD, just VHS. Probably due to clearance issues with the NFL.

Tommy C
From the warehouse of useless information, regarding the "Peanuts" specials:


There was also a 1988 special that was a combination of live-action and animation, "It's the Girl in the Red Truck, Charlie Brown", which is also on VHS but not DVD, so if you count that one, then there are 45 specials.